A look at women’s advances over the years in Congress

WASHINGTON — They sponsor bills. They pass laws. They’re some of the most powerful politicians in the United States.

But they couldn’t even wear pants to work until the mid-1990s.

There may be more women in Congress than ever before, but Capitol Hill hasn’t come close to achieving gender parity. And recent revelations of sexual harassment of female aides and even lawmakers by their male counterparts have thrust the “boys’ club” culture of Congress into the spotlight.

A timeline of hard-won victories for women in Congress, as they fought to achieve equal treatment and access:

1962: Women in Congress press for the establishment of a women’s-only lounge on the first floor of the Capitol. That year, H-235 was dedicated as a powder room and lounge for female members, and included the only women’s restroom on the premises; the men’s bathroom was situated right outside of the House floor. The reading room was re-named after Lindy Boggs in 1991, and remains the only room in the Capitol named after a woman. (20 congresswomen; 2 senators, 18 House members)

1965: Congress opens a “Ladies Health Facility” for female members. The facility was significantly smaller than the two-floor men’s gym in the Rayburn House Office Building, which also had a locker room and pool for use by male members. The women’s facility was inferior, offering antiquated wooden rowing machines and wooden bars; Rep. Pat Schroeder described the facility as “six hair dryers and a ping-pong table,” according to the Office of the House Historian. (13 congresswomen; 2 senators, 11 House members)

1969: Rep. Charlotte T. Reid, a Republican from Illinois, is credited with being the first woman to wear pants on the House floor; she showed up to work in a “black wool, bell-bottomed pantsuit” and caused a stir. In the decades that followed, female representatives were discouraged from wearing pants, but some continued to do so. (11 congresswomen; 1 senator, 10 House members)

1985: The men’s gym in the House of Representatives becomes co-ed after Rep. Barbara Boxer and two other female members of Congress protest women’s exclusion from the facility. The congresswomen re-wrote the lyrics to “Has Anybody Seen My Gal” to reflect the cause, and sang it during a meeting of Democratic whips. The following month, the three-member House gym committee integrated the facility — but didn’t add a locker room for women, forcing female members to walk through public corridors in their gym clothes. Congresswomen also had to call an attendant to first make sure the doors to the showers were closed before they would be let inside. (25 congresswomen; 2 senators, 23 House members)

1992: “Year of the Woman”: More women win elections than ever before in both the House (24 elected) and the Senate (three elected). Total: 32

Majority Leader George Mitchell requests the construction of a women’s restroom just off the Senate floor sometime around the 1992 election. It was built the following year. 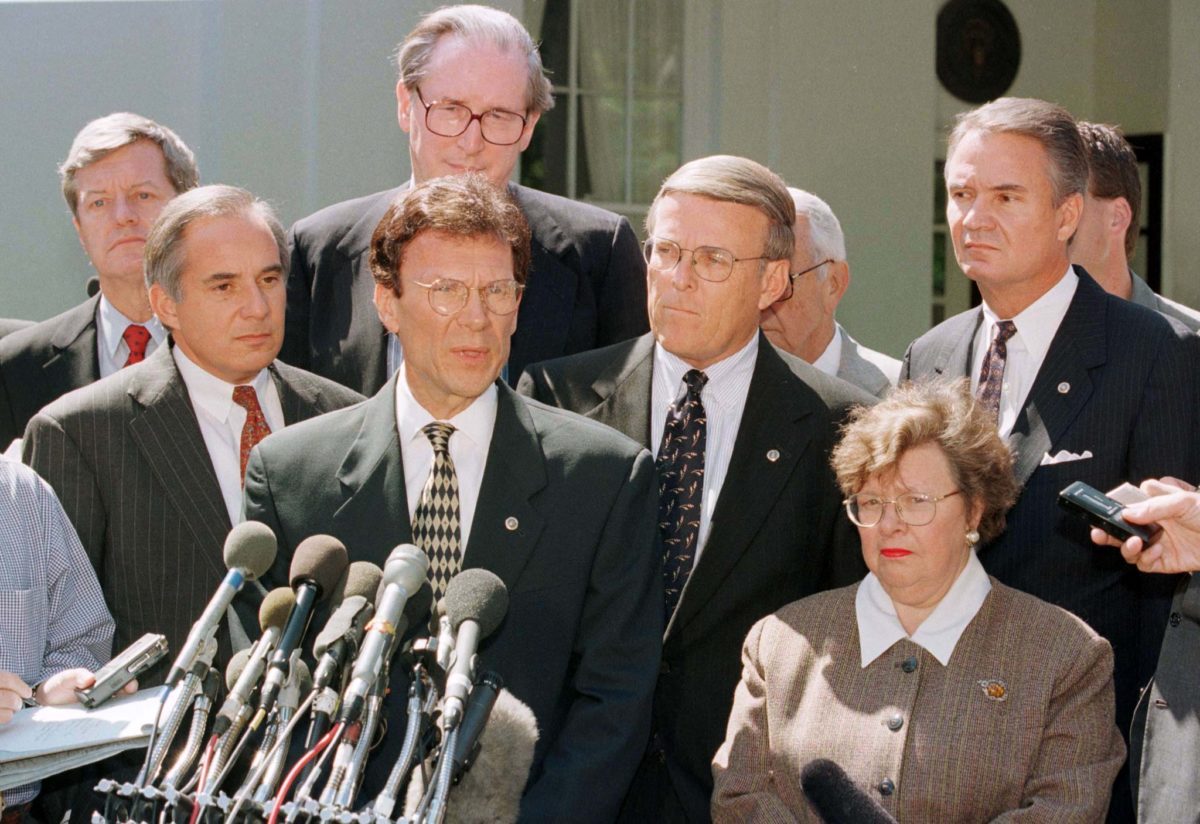 1993: Sens. Barbara Mikulski, Nancy Kassebaum and Carol Moseley-Braun are credited with being the first to buck tradition by wearing pants on the Senate floor, breaking an unofficial rule that women must wear dresses or skirts. According to other reports, Senate sergeant-at-arms Martha Pope circulated a memo among door attendants updating the dress code to include “coordinated pantsuits” after Moseley-Braun showed up in slacks. (54 congresswomen; 7 senators, 47 House members)

2011: Female members of the House of Representatives get a women’s bathroom off the House floor. Since 1962, they had been forced to use the restroom inside the women’s reading room. (90 congresswomen; 17 senators, 73 House members).

2017: More than 30 female lawmakers from both parties wore sleeveless blouses and dresses during a “Sleeveless Friday” protest of a rule barring congresswomen from showing their arms on the House floor and the adjoining Speaker’s Lobby. Speaker Paul Ryan pledged to “modernize” the dress code. (105 congresswomen; 21 senators, 84 House members)

Left: Supreme Court nominee, Ruth Bader Ginsburg (left) is greeted by the first two women to serve on the Senate Judiciary Committee - Dianne Feinstein (D-CA) and Carol Moseley-Braun (D-IL), right - on July 20, 1993 prior to the opening of Ginsburg's confirmation hearings on Capitol Hill. Photo by Reuters