A primary day in the life of an unbound delegate

PHILADELPHIA — It was April 26, the day of Pennsylvania’s primary, and Seth Kaufer’s inbox contained 50 emails from Republican voters in Philadelphia’s second ward. Kaufer, a local GOP leader, was on the ballot to become an unpledged delegate at the party’s national convention this summer.

“Are you pro-Trump or anti-Trump?” one person asked.

“I pray the Holy Spirit guides you for the direction of the country, because I think that our country’s future is at risk,” wrote another, adding, “please vote for Trump, as the popular vote has spoken.”

Despite the pressure, Kaufer refused to commit to a candidate before Pennsylvania’s primary last Tuesday. Trump carried the state, and Kaufer won an uncontested race to become one of the state’s 54 unbound delegates.

In an interview in Philadelphia on primary day, Kaufer, a 36-year-old gastroenterologist, said the results in his congressional district — which Trump wound up winning — would be “one of the biggest factors” in his final decision.

“I’m trying to see all sides of it and make the best decision,” Kaufer said over coffee and a blueberry muffin at the South Street Diner, a popular neighborhood eatery. “Being uncommitted puts me in the best position to listen to everyone.”

In a follow-up message this week, Kaufer said he plans to remain a free agent. The stance is at odds with many of Pennsylvania’s 54 unbound delegates. A majority have said they plan to back the candidate of their choice or the one who carried their congressional district.

“Being uncommitted puts me in the best position to listen to everyone.”

The fight over unbound delegates like Kaufer may become irrelevant, of course, if Trump clinches the Republican nomination by the end of the primaries.

That scenario looks increasingly possible, especially if Trump wins Indiana’s primary on Tuesday. But Trump could still fall short, forcing a contested convention in which unbound delegates would help decide the nomination.

Before the Pennsylvania primary, Trump, Sen. Ted Cruz of Texas and Ohio Gov. John Kasich met in private with a handful of the state’s unbound delegates, including Kaufer, offering a preview of the back-room negotiations that might take place around a contested convention.

The meetings took place before campaign events in the Philadelphia area. The meeting with Cruz, in a room at the Constitution Center, lasted roughly half an hour, Kaufer said.

“He was asking what we cared about. He said, ‘No softballs, be tough on me and ask me what you want to know,’” Kaufer said.

READ MORE: Why Trump and Sanders are blasting the same enemy in Indiana (and it’s not Clinton)

Kaufer also met separately with Kasich and Trump, who offered to take pictures with the unbound delegates who showed up to the meeting but did not hold a question-and-answer session.

It was a heady week for Kaufer, who has long been interested in politics but did not expect to find himself in the thick of the GOP nomination battle this year.

Kaufer, who grew up in Kingston, Pa., became interested in politics in 1994 as a high school student. Newt Gingrich had just led the Republican takeover of the House, and Kaufer found himself drawn to the party’s push for lower taxes and small government. 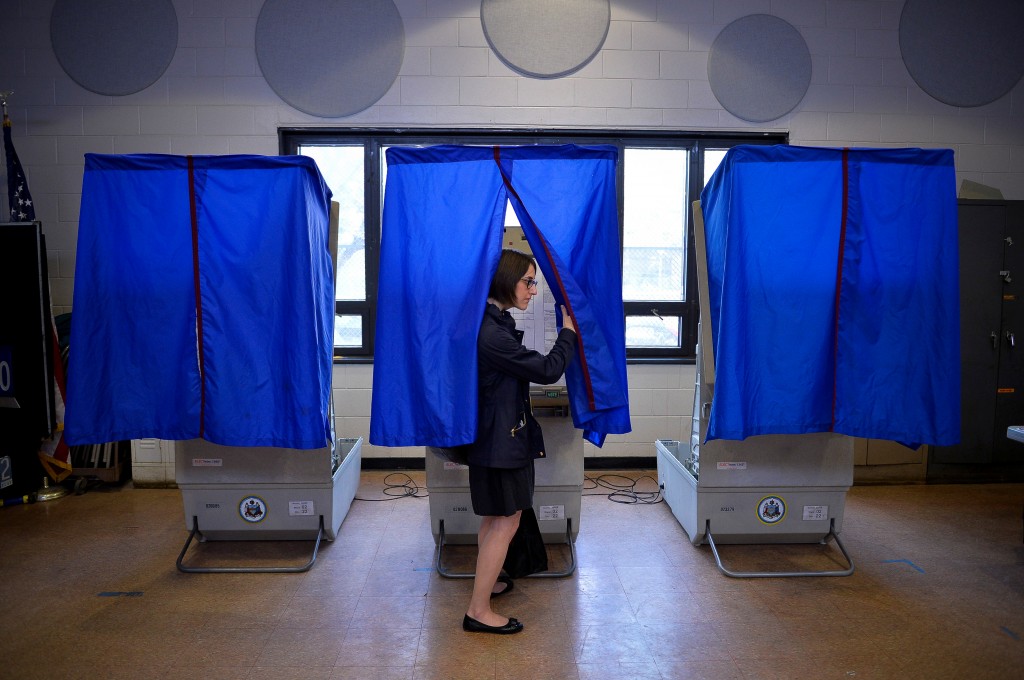 A voter leaves the booth after casting her ballot in the Pennsylvania primary at a polling place in Philadelphia on April 26. Photo by Charles Mostoller/ Reuters

“It was exciting,” Kaufer said. “I really felt like my political philosophy was being shaped at the time.”

Kaufer majored in biochemistry at Lafayette College, but still found time to participate in the school’s young Republicans club. After graduating from medical school and starting his career in Philadelphia, Kaufer become involved in local politics, working his way up to a ward leader post.

Kaufer served as an alternate delegate to the Republican National Convention in 2012. He did not envision that being a delegate this year would bring so much attention.

But Kaufer seems to be taking the pressure in stride as he prepares for the GOP convention in Cleveland in July. Most of the phone calls and emails he receives are courteous, he said. Like this email from a second ward resident:

“Good morning, Mr. Kaufer. I understand that you plan to go to the RNC as an uncommitted delegate. I’m a Republican voter, and I would like to know [how you plan to vote].”

Correction: Kaufer is the Republican leader of Philadelphia’s second ward, not the fourth ward as originally stated.