But Clinton has an important edge: Her experience in an earlier hard-fought Granite State campaign, when she beat Barack Obama by 2 percent in New Hampshire’s 2008 Democratic primary. And the way Clinton won that race yields insight into how this year’s primary between her, Sanders and former Maryland Gov. Martin O’Malley, who is running a distant third in the polls, will turn out.

New Hampshire is a small state, but it’s packed with distinct political regions. And presidential primaries are fought across that landscape, town by town, city by city, as candidates plaster local TV screens with ads and mobilize small armies of volunteers in sophisticated get-out-the-vote efforts.

The state’s peculiar political geography reveals patterns that explain why a race turned out the way it did. Here’s how the final vote tally in the ’08 primary race ended up, with the towns Clinton won in blue, and Obama’s towns in yellow:

The 2008 map tells a very clear political story. Clinton dominated in the vote-rich, traditionally Republican-leaning towns of southeastern New Hampshire and along the Massachusetts border, as well as chunks of far-north Coos County.

Obama, on the other hand, swept the more rural, Democratic-leaning central and western regions, as well as liberal centers like Durham, home of the University of New Hampshire, and Hanover, where Dartmouth College is located.

That same pattern has held in previous Democratic presidential primaries, including the 2004 race in which John Kerry and Howard Dean finished first and second. 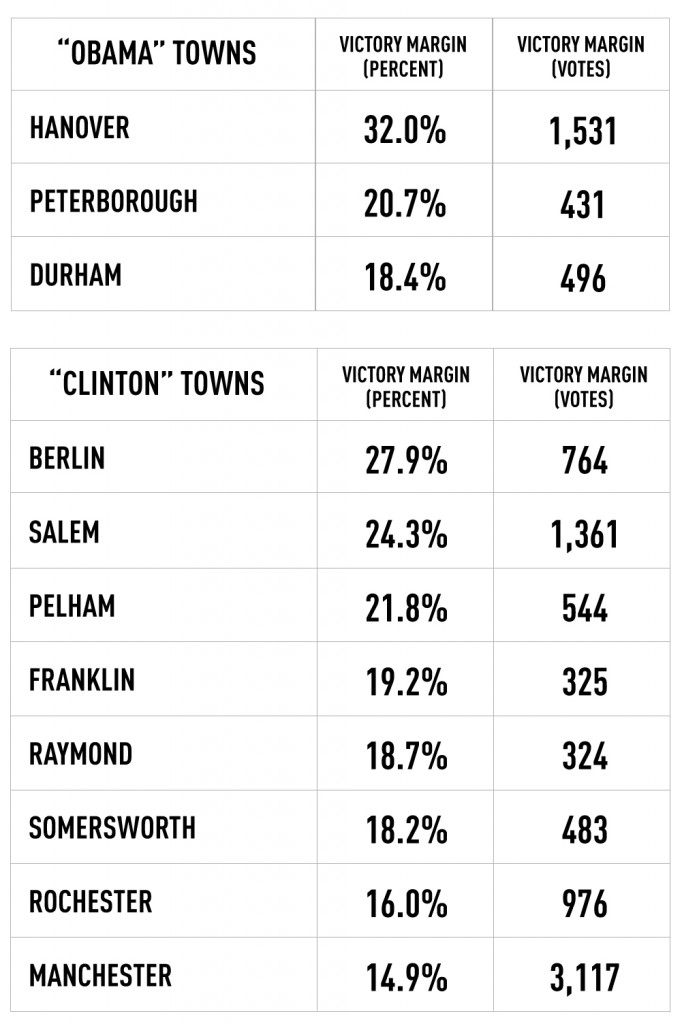 While Dean won fewer towns (and votes) than Obama did in 2008, the electoral maps were strikingly similar. In both races, the winner took most of the heavily-populated and right-leaning southeastern part of the state and pieces of the North Country, while the liberal “outsider” held the more rural and liberal western slice of New Hampshire, according to a new elections database developed by NHPR that compiled voting results in the state stretching back to the 1970s.

That’s one piece of the story. But knowing the margins by which a candidate won or lost each town is key, too. (Click the “vote margins by town” tab on the map above to see those results).

While Obama carried more individual towns in 2008, Clinton rolled up bigger margins in the places she won. Looking just at those cities and towns where candidates won by a 15 percent margin or more, Clinton’s “safe” towns far outnumbered Obama’s, both in overall number and in the vote total.

There’s a pattern there, too. Clinton racked up her biggest margins in the state’s former mill cities – places like Manchester, Berlin, Somersworth and Rochester, all bastions of blue-collar Democratic voters. She also enjoyed big wins in some of the large, more conservative towns of the Southern Tier, like Salem and Pelham.

Those blowouts in the state’s major population centers erased whatever geographic advantage Obama had in rural areas and the college towns of Keene, Hanover and Durham. (Obama only won two communities by 500 or more votes, while Clinton had a 500-plus margin of victory in nine cities and towns).

So what does this tell us about how the 2016 Democratic primary might turn out?

If past patterns hold, Sanders’ vote base will be in western New Hampshire, particularly the towns bordering his home state of Vermont. But he’ll have to chip into Clinton’s margin in densely populated, less liberal southeastern New Hampshire if he wants to remain competitive. Sanders probably also need to scoop up more votes than Obama did in Manchester, which accounted for 40 percent of Clinton’s victory margin in 2008.

Keep an eye on the vote returns in post-industrial cities like Berlin and Rochester on Feb. 9, the day voters head to the polls. If Sanders is running close to Clinton there, she’ll likely have a hard time scraping out a statewide victory.

A look at the candidates’ campaign schedules in New Hampshire over the past year also provides some insight into how the candidates are competing geographically.

Sanders (represented by orange dots in the above map) has made a handful of visits to Greater Manchester, Clinton’s base eight years ago. But his stops in southern New Hampshire are far outnumbered by Clinton’s.

Instead, Sanders has spent the bulk of his time in the more liberal, pro-Obama towns of the Concord area, the Seacoast and the northwestern New Hampshire. But he likely won’t be able to count on those areas alone to push him past Clinton on Primary Day.

Above: Hillary Clinton supporters rallied ahead of the Democratic debate last month at Saint Anselm College in New Hampshire. Clinton and Sen. Bernie Sanders are locked in a tight race in the state. Photo by Andrew Burton/Getty Images