SANTA ANA, Calif. — The Trump administration is calling for the expanded use of family detention for immigrant parents and children who are stopped along the U.S.-Mexico border, a move decried by advocates as a cruel and ineffective attempt to deter families from coming to the United States.

Immigration authorities on Friday issued a notice that they may seek up to 15,000 beds to detain families.

Immigration authorities on Friday issued a notice that they may seek up to 15,000 beds to detain families. The Justice Department has also asked a federal court in California to allow children to be detained longer and in facilities that don’t require state licensing while they await immigration court proceedings.

“The current situation is untenable,” August Flentje, special counsel to the assistant attorney general, wrote in court filings seeking to change a longstanding court settlement that governs the detention of immigrant children. The more constrained the Homeland Security Department is in detaining families together during immigration proceedings, “the more likely it is that families will attempt illegal border crossing.”

The proposed expansion comes days after a public outcry moved the administration to cease the practice of separating children from their migrant parents on the border. More than 2,300 children have been taken from their parents since Homeland Security announced a plan in April to prosecute all immigrants caught on the border.

WATCH: Trump pushes back against criticism of family separation

In all, about 9,000 immigrants traveling in family groups have been caught on the border in each of the last three months, according to federal authorities.

Immigrant advocates contend detention is no place for children and insist there are other alternatives to ensure they and their parents attend immigration court hearings, such as ankle bracelets or community-based programs. The federal court ruled several years ago that children must be released as quickly as possible from family detention.

“It is definitely not a solution under any circumstances,” said Manoj Govindaiah, director of family detention services at the RAICES advocacy group in Texas. “At no point should a child be incarcerated, and children need to be with their parents.”

In all, about 9,000 immigrants traveling in family groups have been caught on the border in each of the last three months, according to federal authorities.

Immigration and Customs Enforcement currently has three family detention facilities — a 100-bed center opened in Pennsylvania in 2001 and two much larger facilities opened in Texas in 2014. Only the Pennsylvania facility can house men, and all of the detainees at the Texas centers are women with children.

In Dilley, Texas, a facility was built on a remote site that was once an oil workers’ encampment. It includes collections of cottages built around playgrounds. The other Texas center, in Karnes City, is ringed by 15-foot fences and has security cameras monitoring movements. It also offers bilingual children’s books in the library, classes, TVs and an artificial turf soccer field.

Inside the Karnes City center, there are five or six beds to a room typically shared by a couple of families. Cinderblock walls are painted pastel colors, said Govindaiah, who added that the facilities are run by private prison operators, not humanitarian organizations, as is the case with shelters for unaccompanied immigrant children. 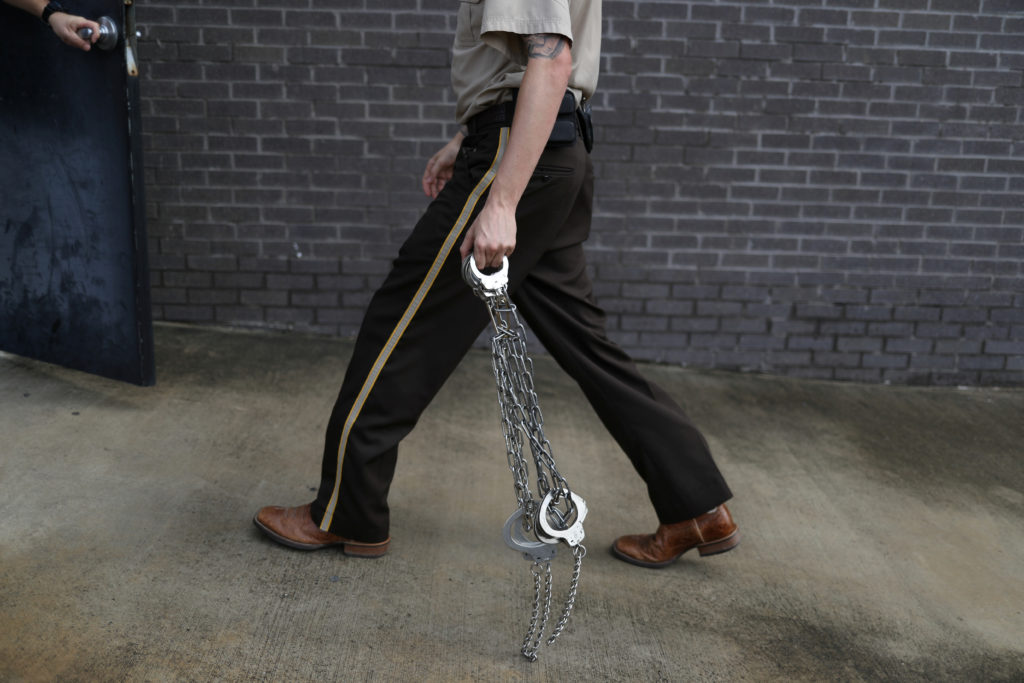 A member of the Zapata County Sheriff’s Office carries shackles to put on undocumented immigrants following hearings at a U.S. federal court in McAllen, Texas, on June 22, 2018. Photo by Loren Elliott/Reuters

Currently, most families spend up to a few weeks in the facilities and are released once they pass an initial asylum screening. They are then given a date to appear before an immigration judge in the cities where they are headed to see if they qualify to stay in the country legally or will face deportation.

Those who do not pass initial screenings can seek additional review in a video conference with a judge, a process that lasts about six weeks.

But that’s much shorter than the six months or a year many families were being held several years ago when the Obama administration began detaining mothers and children in a bid to stem a surge in arrivals on the border, Govindaiah said.

At the time, many were being held until their immigration cases — not just the initial screenings — were resolved.

Advocates then asked the federal court to enforce a decades-old settlement over the detention of immigrant children, and a judge ruled the children should be released as quickly as possible.

The settlement is seen by advocates as a way to ensure children are placed in age-appropriate facilities and for no longer than necessary. State licensing adds another layer of oversight.

Brane said there is a viable alternative: supervised release to communities around the country. The federal Family Case Management Program — terminated under the Trump administration — compiled a perfect record of attendance by migrants at court hearings, and a 99 percent appearance record at immigration check-ins, according to a 2017 report by the Homeland Security inspector general.

Just 2 percent of participants — 23 out of 954 — were reported as absconders.

In Friday’s notice, ICE said the family detention beds should be in state-licensed facilities and allow freedom of movement for detainees, and should preferably be located in states along the southwest border.

In addition to providing private showers and educational field trips for children, the centers should appear “child-friendly rather than penal in nature,” the agency said.

Associated Press writers Will Weissert in McAllen, Texas, and Ricardo Alonso-Zaldivar in Washington, D.C., contributed to this report.

Left: A woman holds a child's hand as undocumented immigrant families are released from detention at a bus depot in McAllen, Texas, on June 22, 2018. Photo by Loren Elliott/Reuters