Afghan girls will be allowed into U.S. for robotics contest

KABUL, Afghanistan — The third time’s the charm for Afghanistan’s all girl robotics team, who will be allowed entry into the U.S. to compete in a competition after President Donald Trump personally intervened to reverse a decision twice denying them enter into the country.

The six girls will now be able to participate next week against entrants from 157 countries. The Afghan girls have devised a ball-sorting robot, which has the ability to recognize orange and blue colors, and can move objects to put them in their correct places.

“I am very happy. This is such an important trip for us,” said 15-year-old team member Lida Azizi, who was excited at the prospect of being able to compete.

The White House on Wednesday said President Trump intervened to allow the team to come to the U.S. After looking at several options, the National Security Council eventually settled on “paroling” the girls, according to a senior administration official who spoke on condition of anonymity to discuss private conversations.

Parole is a temporary status that allows a person who is otherwise ineligible to enter the United States temporarily because of an emergency or humanitarian purpose, or because it’s considered in the public good.

“It’s a happy moment for our team,” team manager Alireza Mehraban told The Associated Press in a telephone interview. “We are going from a war-torn country and the purpose is to show the capability of Afghan women. It’s an important step for Afghan women.” 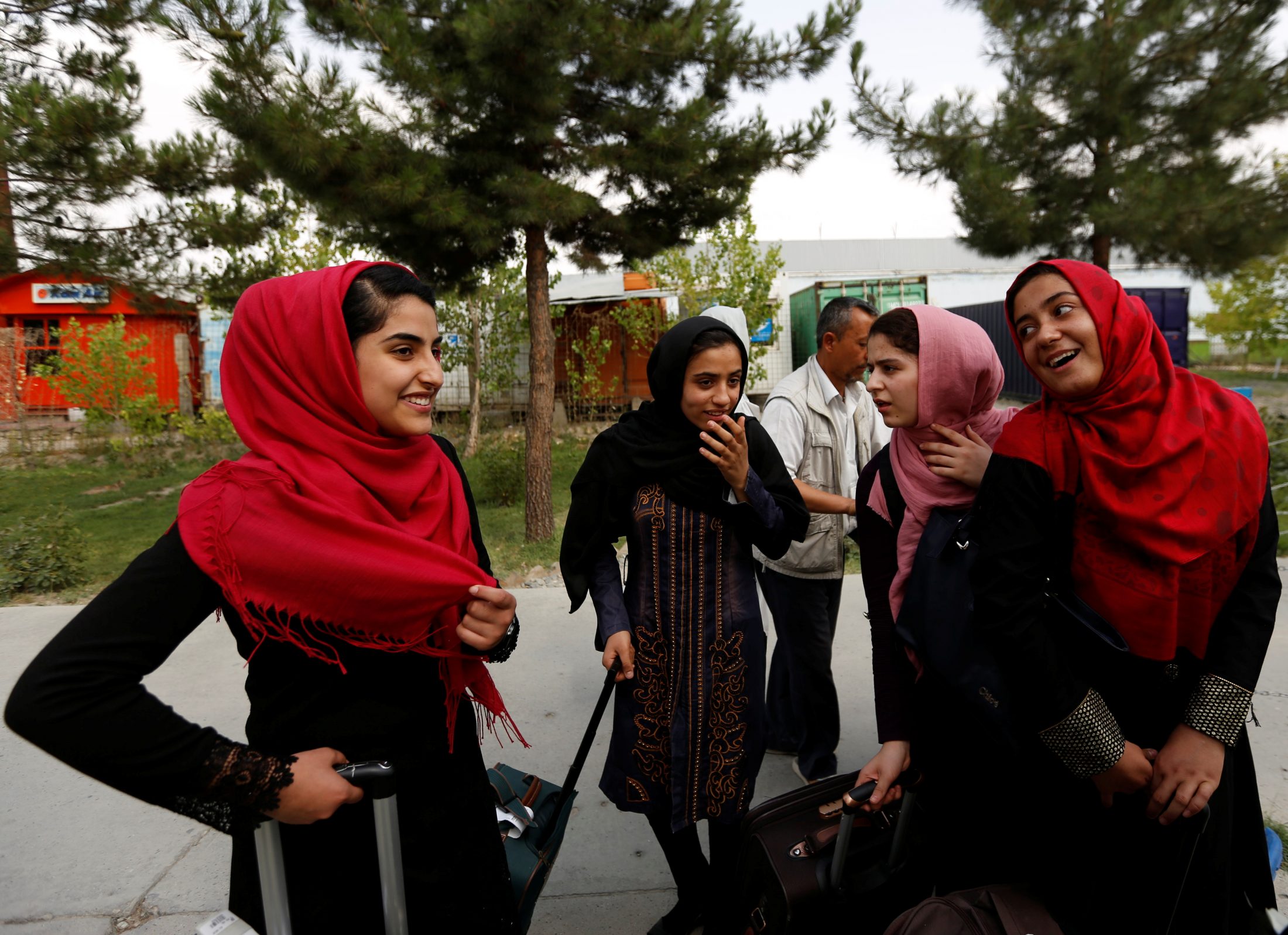 Members of Afghan robotics girls team chat with each others as they arrive to receive their visas from the U.S. embassy in Kabul, Afghanistan. Photo by Mohammad Ismail/Reuters

Homeland Security Department spokesman David Lapan said Wednesday the U.S. Citizenship and Immigration Services approved a State Department request for six girls from the war-torn country to be allowed in, along with their chaperone, so they can participate in the competition.

The team had twice traveled from their home in war-torn Afghanistan’s western Herat to the capital of Kabul to apply for visas. Much of the 800-kilometer (480-mile) territory between the two cities is controlled by the Taliban, who when they ruled Afghanistan denied girls the right to an education and women the right to work. The Taliban were ousted by the U.S.-led coalition in 2001.

After being refused visas a second time, the robotics team had resigned themselves to participating in the competition via a Skype video link.

The U.S. State Department had declined to comment on why the Afghan team’s visa applications were denied, saying that “all visa applications are adjudicated on a case-by-case basis in accordance with U.S. law.”

But on Thursday, all six girls packed into a small taxicab to head to the U.S. Embassy with their passports in hand to get their documentation for entry into the U.S.

The girls wanted to show the world that Afghans could also construct a hand-made robot and they had been deeply disappointed by the initial rejections.

Mehraban said the team’s participation will send a message to other Afghan women about the possibilities open to them.

Afghanistan remains a deeply conservative nation and while girls are in school today, gaining rights for women and girls is still a struggle for many.

The nonprofit organizing the competition celebrated the reversal in a jubilant statement Wednesday.

“I truly believe our greatest power is the power to convene nations, to bring people together in the pursuit of a common goal and prove that our similarities greatly outweigh our differences,” said Joe Sestak, president of First Global. He credited “the professional leadership of the U.S. State Department” for ensuring that all 163 teams from 157 countries, including a team of Syrian refugees, would be able to participate.

The six member team arrived at the Kabul Airport on Thursday to a media storm. Airport workers and passengers wondered at the attention the girls were receiving, unaware of their identities.

Afghanistan is not part of Trump’s order to temporarily ban travel from six Muslim-majority countries. Teams from Syria, Iran and Sudan — which are on that list — were granted visas to compete. Members of the team from Gambia were also granted visas after initially being denied.

Team member Fatima Qadiryan, 14, was overjoyed to be going to the U.S. for the competition.

“It’s my dream to develop robots,” she said. “I want to say thank you to the U.S. officials and to the U.S. president who helped us.”

Left: Members of Afghan robotics girls team which was denied entry into the U.S. for a competition, work on their robots in Herat province, Afghanistan. Photo by Mohammad Shoib/Reuters