The first day of the Senate impeachment trial ended where it began: with a majority of Senate Republicans opposed to the proceedings, a clear sign there likely won’t be enough votes in the end to convict former President Donald Trump.

The Senate voted Tuesday 56-44 to proceed with the trial against Trump on the House charge that he incited the insurrection at the Capitol on Jan. 6.

Six Republicans joined all 50 Democrats in voting to move forward with the trial, after hearing arguments from the House impeachment managers and Trump’s defense team on whether the Constitution allows the Senate to conduct an impeachment trial of a former president.

READ MORE: Your guide to the Trump impeachment trial of 2021

House Democrats said the matter was not up for debate, arguing that liberal and conservative scholars alike believe the Constitution states clearly the Senate has the sole power to conduct “all” impeachments and does not distinguish between current and former officials.

“All means all, and there are no exceptions to the rule,” said Rep. Jamie Raskin, D-Md., the lead House manager.

Trump’s lawyers Bruce Castor and David Schoen, previewing their own argument for acquittal, painted the impeachment trial as a political witch hunt perpetrated by Democrats eager to block Trump’s future in politics. But Castor led off the Trump team’s presentation with a lengthy, rambling monologue about the Senate that had nothing to do with the trial, drawing criticism from conservative commentators and Trump allies like Alan Dershowitz, a member of Trump’s defense team in his first impeachment trial.

Dismissing the Senate trial from the outset would create a “January exception” and send future presidents the message that they can commit impeachable offenses in their final weeks in office without facing any consequences, said Rep. Joe Neguse, D-Colo., another House manager.

Presidents should not be allowed to “commit grave offenses in their final days and escape any congressional response. That is not how our Constitution works,” Neguse said.

Neguse pointed out the framers of the Constitution believed the Impeachment Clause applied to former officials, and noted there was precedent for the Senate conducting an impeachment trial for officials who had already left office.

In laying out their argument for proceeding with the trial, Democrats also previewed their case against Trump. Raskin played a video of the Jan. 6 attack that juxtaposed clips of Trump’s rally that morning with the violent mob of his supporters who attacked the Capitol hours after he urged them to “stop the steal” and “fight” the results of the election.

“This was a national tragedy. A disaster for America’s standing in the world and President Trump is singularly responsible for inciting it,” Rep. David Cicilline, D-R.I., said. 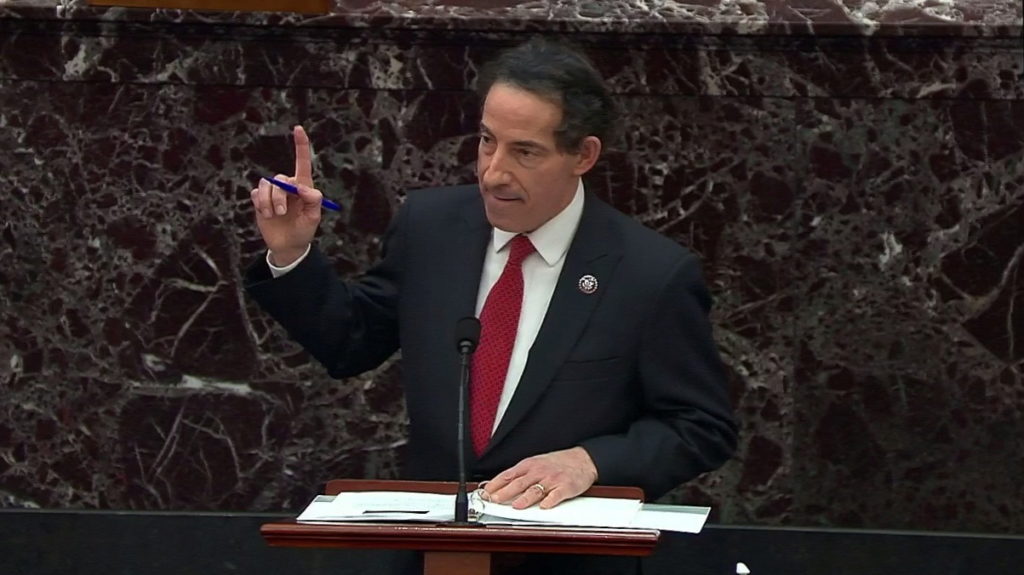 House lead impeachment manager Rep. Jamie Raskin (D-MD) points up at a video that he had just shown of Trump supporters storming the U.S. Capitol building on the floor of the Senate chamber in Washington on February 9, 2021. Photo by U.S. Senate TV/Handout via Reuters

The House managers did not present new evidence to support their claims, sticking largely to the argument Democrats have made for weeks that Trump was responsible for the violence.

They will have 16 hours to make their case in full under the trial rules, but the House managers signaled Tuesday they believed Trump’s rally and the public nature of the attack left them with an airtight case.

Trump’s defense team focused on the question of whether the trial was constitutional.

“The trial in the Senate of a private citizen is not permitted,” Schoen said, echoing the position taken by many Senate Republicans in recent days. “A non-president does not hold an office and therefore cannot be impeached.”

However, Trump was impeached by the House while he was president, and Democrats argued Tuesday the ensuing trial did not have to occur while he was in office.

Schoen also argued that Trump had not been given due process by the House when it carried out a “dangerous snap impeachment” vote just one week after the attack last month, and that under the Constitution the chief justice of the Supreme Court was required to preside over the impeachment trial of a president.

Democrats chose Sen. Patrick Leahy, D-Vt., the Senate pro tempore, to preside over the trial instead of Chief Justice John Roberts. Democrats defended their decision, arguing that the Constitution requires that the chief justice preside “when the president of the United States” is on trial in the Senate, and Trump is no longer president.

At least two-thirds of the Senate, or 67 votes, are required to convict Trump. If the Senate does ultimately find him guilty, which is highly unlikely given Republican senators’ public statements and votes so far, the body could then hold a separate vote to bar him from holding future federal office. That would require only a simple majority to approve.

The Democrats’ “real reason” for impeaching Trump in his final weeks in office was to prevent him from remaining a viable “political rival” in the future, Castor said.

Schoen was more blunt, arguing that Democrats are “abusing the impeachment power for political gain.” Democrats “don’t want unity, and they know this so-called trial will tear this country in half.”

Trump’s defense team failed to convince Senate Democrats, all of whom voted to move forward. They also failed to move some Republicans.

In a procedural vote earlier this month, 45 Republicans voted that the trial was unconstitutional and should not proceed, while five voted that it was constitutional. On Tuesday, Sen. Bill Cassidy, R-La., joined their ranks as the sixth Republican yes vote.

“The House managers had much stronger constitutional arguments. The president’s team did not,” Cassidy said in a statement. Other Republicans also criticized Castor, saying the Trump defense team could have gotten off to a better start.

But House managers will need to win over more Republicans — at least 17 in all — in order to convict Trump at the end of the trial. After the first day, that remains extremely unlikely.