After mass shootings, should legal guns be welcomed into church?

The Nov. 5 shooting that left more than two dozen dead at the First Baptist Church in Sutherland Springs, Texas, has forced many churches across the country to grapple with how to boost security and keep congregants safe.

After the shooting, St. Peter’s Episcopal Church in Ellicott City, Maryland, decided to make a large banner with written prayers and words of support that will eventually be mailed to the people at the First Baptist Church.

The shooting in south Texas had brought up painful memories for the congregation. In 2012, a gunman opened fire in Saint Peter’s, killing the church’s co-rector, Mary Marguerite-Kohn, and its administrative assistant, Brenda Brewington. The gunman died from a self-inflicted gunshot wound.

“While we really can’t understand completely the depth of loss and grief they’re going through,” the Rev. Anjel Scarborough told the NewsHour, “we certainly understand what’s it’s like to have gun violence visit your church.”

Scarborough said churches have often been a place for people on the margins to come in and feel welcomed. But the reverend also noted how that openness could be taken too far.

“I think, as churches, we’re often too trusting with access to the facilities,” she said. “When I walked into my former parish, half the town had a key to the church, even if they didn’t need it any more.”

Churches have often been a place for people on the margins to come in and feel welcomed. But that openness can also be a threat.

Maryland offers open and concealed carry permits, though the state has among the most restrictive gun laws in the country. St. Peter’s remains a gun-free zone, because, Scarborough said, the weapons have “been manufactured with the express intent of killing.” Scarborough also said that security remains a constant and present focus for the church. Saint Peter’s has since limited the number of unlocked doors and access points, among other security changes, but Scarborough cautioned that “there’s a point at which we step into the realm of making security our God.”

Houses of worship have been the targets of several shootings in recent years. An Associated Press report released prior to the Sutherland Springs incident listed at least 13 shootings since 2012. The deadliest, before Sutherland Springs, was in June 2015, when Dylann Roof shot and killed nine people at the historic Emanuel African Methodist Episcopal Church in Charleston, South Carolina.

Shootings are not the only threat. An average of nine mosques per month have been targeted in the United States in 2017, according to a CNN analysis in August. Those attacks included arson and bombings. 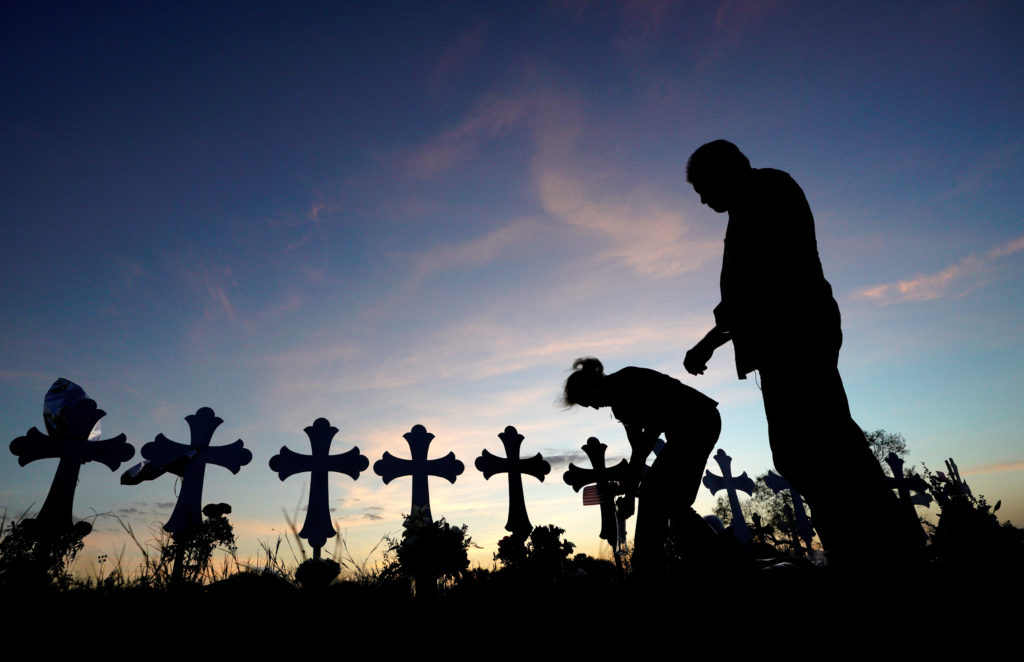 Judy Green places tiny American flags along a row of crosses as her husband Rod watches near the site of the shooting at the First Baptist Church of Sutherland Springs, Texas. Photo by REUTERS/Rick Wilking.

In 2013, The Council on American-Islamic Relations has released a 16-page safety guide on how to protect mosques and Islamic institutions.

The booklet stresses the importance of vigilance. It recommends mosques have some kind of “security presence” outside the building as a way to take away “the element of surprise” from the attacker.

“Should the attacker engage persons outside the mosque, every effort must be made to keep the intruder from getting inside the mosque in order to minimize casualties,” the guide said.

The CAIR guide also recommends triggering alarms and calling the police as soon as possible, adding that fighting back against the attacker should be used as a last resort.

Security companies like LionHeart International Services Group, a security training and consulting firm, has provided churches with advice and training for what to do to prevent attacks like the one in Sutherland Springs since 2013.

“The church is a hospital,” said LionHeart President Tim Miller, a former Secret Service agent. “It needs to be a place where people who are struggling with mental illness or substance abuse or domestic issues or a lot of other challenges are feeling welcome when they come and not something that looks like a prison.” he said.

Miller said requests for LionHeart’s security training conferences are growing. The group traditionally holds five conferences a year across the country. They’ve had to increase the number to 12 this year to keep up with demand.

Along with their two-day security conferences, which cost $99 per person, Miller’s company offers a wide range of services at different price points, ranging from free phone consultations to a full on-site security assessment and training, which can cost upwards of $2,500. LionHeart advocates that churches have a clear plan and a dedicated team, either professional or volunteer, trained in church security. LionHeart also said these trained teams should be in place for all services or major events, should carry a gun and be trained on how to use them.

“The most important thing you can have in the middle of a crisis incident is time,” Miller said. “If you have time you can do things, you can lock doors, you can execute your plan.”

But Miller added that if time is limited, churchgoers need the ability to fight back.

“If you don’t have a weapon, it’s very difficult to fight someone with a weapon,” Miller said.

In states across the country, some churchgoers already bring weapons to services. In Virginia, there was once a 1632 law that required men to bring their guns to church. While it is illegal in many states to carry guns into schools, many concealed carry laws do not specifically prohibit bringing firearms into churches, though places of worship can choose to restrict guns on their own campuses. For churches comfortable with parishioners carrying guns, there is always the option of having an armed volunteer group, Miller said. (There are also risks. On Thursday, after a church dinner at which members discussed guns and safety, an 81-year-old Tennessee man accidentally pulled the trigger on his handgun, and not realizing it was loaded, shot himself and his 80-year-old wife.)

Carl Chinn, a church security consultant based in Colorado, said churches opposed to firearms could keep their parishes safe by having someone outside the building keeping an eye and ear out for trouble.

Chinn, who is in favor of churchgoers carrying firearms for protection, cited a 2008 shooting where a gunman opened fire on a gun-free church in Knoxville, Tennessee, killing two and injuring six others. The gunman was tackled by parishioners, preventing further death. 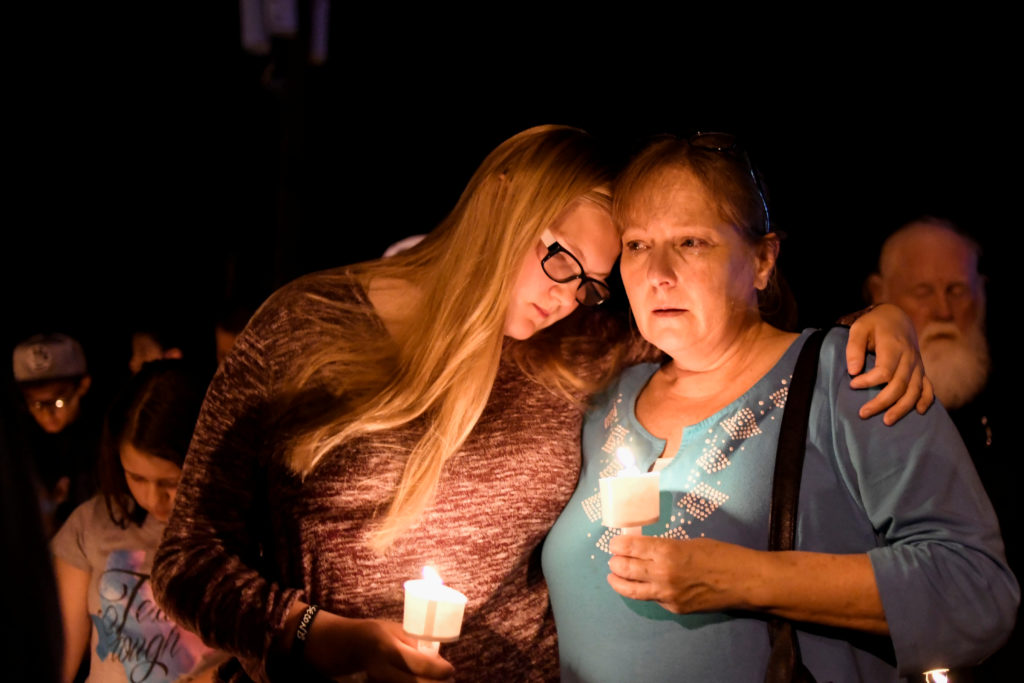 Local residents embrace during a candlelight vigil for victims of a mass shooting in a church in Sutherland Springs, Texas, U.S., November 5, 2017. REUTERS/Mohammad Khursheed – RC16204ECCD0

Texas Attorney General Ken Paxton also supported the idea of guns in churches in a recent interview, pointing out that Texas law allows citizens to carry concealed weapons into churches.

“We need people in churches. Either professional security or at least arming parishioners or the congregation so that they can respond to something like this,” Paxton said in an interview with Fox News. The Michigan Senate this week passed a bill that would allow those with concealed carry permits to bring firearms to places like schools and churches.

However, hiring security could be an expense churches like Scarborough’s, which have only 70 Sunday parishioners, can’t afford. Miller said armed security or armed police can cost anywhere from $15 to $50 an hour.

Scarborough says that although churches like hers can afford occasional, one-time investments — like new locks or adding a security system — recurring monthly expenses, like hiring security guards, are often too steep.

“Many are struggling to pay their priest,” Scarborough said.

The Rev. Tom Simmons, the rector of Saint Peter’s Episcopal Church in Purcellville, Virginia, said his congregation has had informal discussions about providing a volunteer security force.

Simmons said members of his congregation have no qualms about bringing guns to church.

“We’re called to teach peace as well as to practice peace, which means we have to continually re-learn the ways of peace in a culture that’s awash in violence.”

Other leaders said guns have no place in church.

Responding to the Las Vegas shooting last month that killed more than 50 people at a country music concert, Bishop Eugene Sutton said people have too long worshiped “at the altar of the gun” as a way to solve their problems. As Christians, “we’re called to teach peace as well as to practice peace, which means we have to continually re-learn the ways of peace in a culture that’s awash in violence,” Sutton, the head of the Episcopal Diocese of Maryland, said in a statement. The diocese doesn’t support guns in churches, but doesn’t have a written policy, defaulting to individual congregations.

After the Texas shooting, Bishops Against Gun Violence, a group of more than 70 Episcopal bishops across the country, called for action. The group was co-founded by Sutton.
“One does not offer prayers in lieu of demonstrating political courage, but rather in preparation,” according to a statement released by the group.

The United Methodist Church released an eight-step guide in 2015 on what Methodists could do in helping to combat gun violence. The first step listed conversations and prayer and ended with advocacy for gun control, including universal background checks.

However, some Southern Baptists like Gary Ledbetter, editor of the news journal the Southern Baptist TEXAN, wrote that the “policies and protocols help hold the darkness back in some limited ways.”

“Those who look for laws or psychology or even first responders for answers to the darkness are not looking to the source of true hope,” Gary Ledbetter wrote in an op-ed a day after the Texas shooting, saying that “human answers” only work to an extent.

The op-ed joined calls from other religious leaders around the country who warned their followers about the danger of fear.

“Courage emerges, not from increased police security, but from enhanced spiritual maturity,” wrote Max Lucado, author and pastor at Oak Hills Church in San Antonio, in an op-ed for Fox News. “These days of violence call for people of faith. People of fear make poor decisions,” he added.

Whatever the approach, churches are facing difficult choices.

“Churches, you don’t lock the doors,” Minister Joey Spann, who was shot when his Nashville, Tennessee church was attacked in September, told the Tennessean. But they may have to, Spann said.

Left: In the weeks after the shooting in Sutherland Springs, Texas, churches across the country are grappling with how to handle security. REUTERS/Rick Wilking.