After shutdown, Senators starting over in search for immigration deal

WASHINGTON — Senators from both parties started a fresh search Wednesday for compromise immigration legislation, but leaders conceded that the effort won’t be easy and were already casting blame should the effort falter.

Around three dozen senators, evenly divided among Republicans and Democrats, planned to meet late Wednesday in what No. 2 Senate GOP leader John Cornyn of Texas said he hoped would “get people thinking about a framework that might actually work.” Their goal is to produce a bipartisan package to protect from deportation the “Dreamers” — hundreds of thousands of immigrants in the U.S. illegally after being brought here as children — and to provide billions to toughen border security.

“The group has to start in a new way with no preconceptions, and come together and find a bill that can garner 60 votes,” Sen. Schumer said.

“We cannot let those who are anti-immigrant, who call giving the Dreamers hope ‘amnesty,’ block us. Because then we will fail, and it will be on the other side of the aisle that made that happen,” said Senate Minority Leader Chuck Schumer, D-N.Y.

Schumer spoke about 12 hours after President Donald Trump put the onus on Schumer.

“Cryin’ Chuck Schumer fully understands, especially after his humiliating defeat, that if there is no Wall, there is no DACA,” the president tweeted late Tuesday, using the acronym for the Deferred Action for Childhood Arrivals program, which has allowed the roughly 700,000 immigrants to remain in the country. “We must have safety and security, together with a strong Military, for our great people!”

Schumer said Tuesday that he’d pulled back an offer of $25 billion for Trump’s long-promised border wall with Mexico. An aide said Schumer had actually withdrawn the offer Sunday night after it became clear that there would be no quick compromise on protecting the Dreamers.

“So now the group has to start in a new way with no preconceptions, and come together and find a bill that can garner 60 votes,” Schumer said, underscoring that Trump’s rejection of an offer the Democrat made Friday on immigration and budget issues meant that the offer was no longer on the table.

Senate Minority Leader Mitch McConnell, R-Ky., has said if senators cannot produce a compromise plan by Feb. 8 — which both sides’ leaders have said will be difficult — he will begin debating immigration legislation in a debate that will be “fair to all sides.” That suggests that both parties would be allowed to offer amendments.

While Cornyn said he hoped the bipartisan group of senators will produce a measure that can pass the Senate, he said, “It would also have to get the president’s support eventually. Because without his support, I don’t think it would pass the House of Representatives,” which has more conservative views on the topic.

Feb. 8 is the date legislation expires that reopened the government after a three-day shutdown, which began after Democrats demanded movement toward an immigration deal as the price for financing federal agencies.

That has made Feb. 8 the next pressure point for reaching an immigration deal. 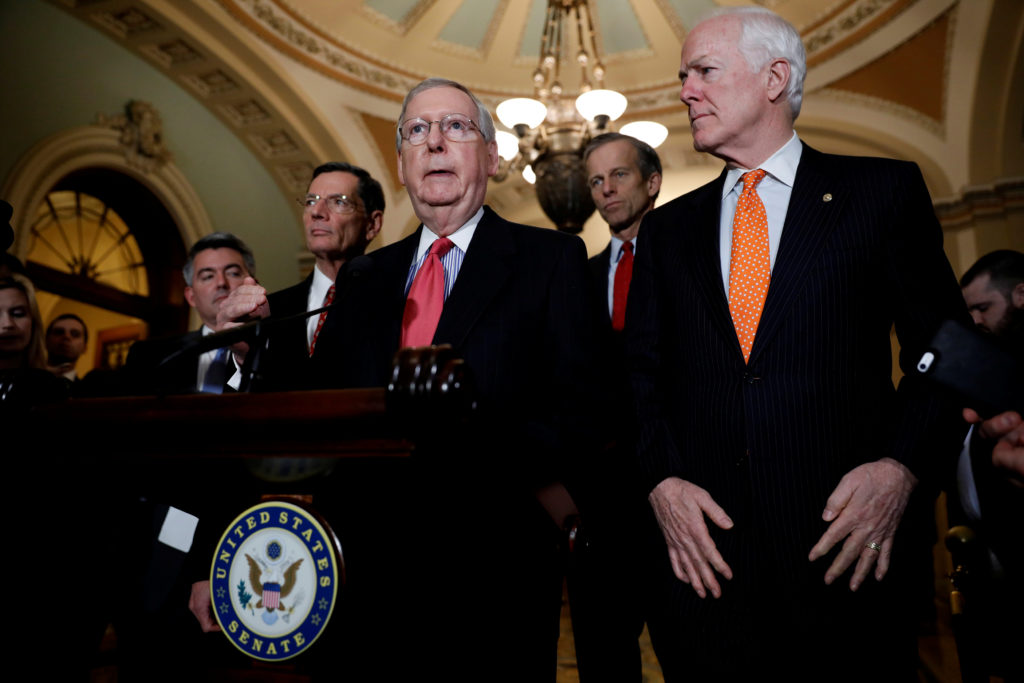 Senate Majority Leader Mitch McConnell said if legislators can’t find a deal before Feb. 8, he will begin debating immigration legislation in a debate that will be “fair to all sides.” REUTERS/Aaron P. Bernstein.

But Republicans say a resolution to the issue can wait until March 5. Trump last year announced that he was ending the Obama-era Deferred Action for Childhood Arrivals program, or DACA, but gave Congress until March 5 to come up with a legislative fix.

The shutdown battle — settled mostly on Trump’s terms — complicated the already difficult search for an immigration pact: GOP hard-liners appeared emboldened, while Democrats absorbed withering criticism from progressives. Neither development seemed likely to push the combatants toward the compromises needed to produce a bill that can pass both the tea party-driven House and the more pragmatic Senate.

Even if the Senate can come up with the votes to pass a plan, Democrats fear there is little chance such a bill would gain the support of House Republicans.

“There were no commitments made in the House” as legislators worked to end the government shutdown, House GOP Whip Steve Scalise of Louisiana said Monday, warning against any “amnesty” measure.

Trump weighed in earlier Tuesday via Twitter: “Nobody knows for sure that the Republicans & Democrats will be able to reach a deal on DACA by February 8, but everyone will be trying….with a big additional focus put on Military Strength and Border Security. The Dems have just learned that a Shutdown is not the answer!”

This has made Feb. 8 the next pressure point for reaching an immigration deal.

Cornyn said Schumer had promised $25 billion for the wall and other border security measures, though not all of that would have been immediate funding. He called Schumer’s withdrawal of the offer “a step backward.”

It remained unclear precisely who was taking the lead in the negotiating.

“If you had a tattoo for every group that’s forming, you’d have an arm full of them,” said Sen. Lindsey Graham, R-S.C., who was working to bring together a new bipartisan group of senators to reach an agreement.

On the House side, the Republican Study Committee, a group of more than 150 lawmakers, announced its support for a bill written by Reps. Bob Goodlatte, R-Va., Raúl Labrador, R-Idaho, and Michael McCaul, R-Texas. Their plan would offer DACA recipients a three-year renewal of legal status, allowing them to continue to live and work in the country with no special path to citizenship. It also contains a host of stringent features that are anathema to Democrats, including reducing legal immigration by 25 percent, adding border patrol agents and denying certain funding to cities that refuse to cooperate with federal immigration authorities.

The White House endorsed that bill, and it appeared to be gaining traction among conservatives. NumbersUSA, a group that advocates for reduced immigration, announcing its support Tuesday.

Left: Senate Minority Leader Chuck Schumer said lawmakers have to put together a new immigration bill, one that can pass on its own with 60 votes. REUTERS/Aaron P. Bernstein.