After Texas Primary: Can Gov. Perry Pull off Another Win?

On March 2, Gov. Rick Perry won the Republican gubernatorial primary in Texas by a comfortable 21-point margin. He earned 51.1 percent of the vote, while Sen. Kay Bailey Hutchison received 30.3 percent and newcomer Debra Medina 18.6 percent. Many postmortems since then have made it sound like this outcome was obvious – that it was clear from the start that Governor Perry would win.

But just a year ago, Perry was running behind Senator Hutchison in trial-heat polls by 25 points. A swing of 46 points — from 25 points down to 21 points up — is just not that common in elections. 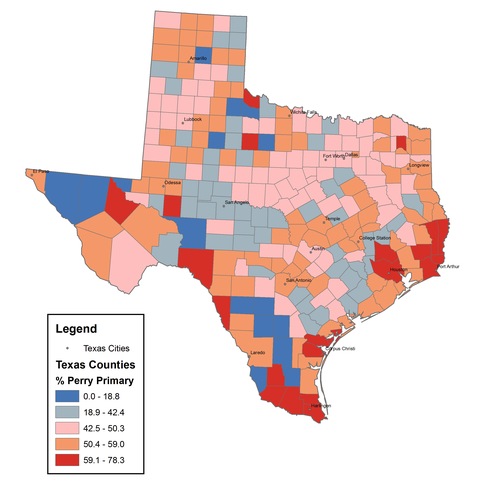 What happened? After all, Hutchison brought to the table her considerable popularity, the experience of four statewide victories in Senate races, and a war chest in excess of $20 million.

The Patchwork Nation analysis
When we look at the GOP primary results through the lens of Patchwork Nation, we see that Perry performed best in the counties classified as the big-city “Industrial Metropolis,” winning 62 percent of that vote. This includes the state’s biggest prize, Harris County, which holds Houston. The suburban “Monied ‘Burbs” and the “Minority Central” counties, which have large African-American populations, were the next-strongest performers at 58.4 and 57.2 percent, respectively.

Perry also managed to win 50 percent of the vote or more in the “Military Bastions,” which are located on or near bases for the armed forces; the “Boom Towns,” which grew during the early 2000s; and the socially conservative “Evangelical Epicenters.”

He fell below 50 percent in the Latino-heavy “Immigration Nation” counties, the small-town “Service Worker Centers,” the sparsely populated “Tractor Country” locations, and in the aging “Emptying Nests.” The last three location types would seem like natural bases of strength for the governor – small-town and conservative – but he lost votes there to Ms. Medina – a meagerly funded candidate who was backed by GOP Texas Rep. Ron Paul and who wound up being a favorite of Tea Party activists by Election Day.

The vote for Hutchison, meanwhile, went from 24 percent in the “Monied ‘Burbs” to 34 percent in the “Military Bastions” and “Emptying Nests.” Her 27 percent showing in Harris County, given its size, was considered disappointing.

A close race in the fall?

Although Texas has been a safe Republican state in recent presidential elections, Mr. White will be a formidable candidate in the fall election. Perry leads him by only six points in current polls, and many independent voters remain ambivalent about whether Perry deserves another four-year term. White has promised to hit Perry much harder than Hutchison did on the charge of incompetence, already arguing that Perry is a “failed governor.”

Then there is the Obama White House, which would desperately like to knock off a prominent Republican governor in a red state. Not only would this be a revenge of sorts for Republican Scott Brown’s victory in Massachusetts, but it would also give the Democrats veto power over redistricting plans in Texas. The state is expected to receive three or four additional congressional seats after the 2010 Census.

A win for White would surely thrust him into the national spotlight as a rising Democratic star. The same is true of Perry on the GOP side. Thus for both men, the personal career stakes are high.

The Lone Star showdown coming this fall promises to be as exciting and closely watched as any contest in the 2010 midterms.