JACKSON, Miss. — Tuesday is a big day for Mississippi voters as they head back to the polls to pick a winner in the Republican Senate primary. Incumbent Sen. Thad Cochran and state Sen. Chris McDaniel are the only two candidates left in a runoff election. In the final efforts to drive up support for Cochran, the campaign brought out some of its most high-profile supporters.

“Ladies and gentleman, the United States senator from Mississippi, Thad Cochran,” said Governor Phil Bryant as he introduced the incumbent senator to a cheering crowd that gathered at the Mississippi War Memorial Building in Jackson, Miss. on Monday.

Bryant was just one of a list of high profile politicians who appeared on stage, including Lt. Governor Tate Reeves, Rep. Gregg Harper and Sen. Roger Wicker of Mississippi and Arizona Sen. John McCain.

Surrounded by military veterans, McCain said Cochran’s support of the many military bases in Mississippi is the key reason to support him.

Should the Republicans retake the Senate, Cochran is in line to chair the Appropriations Committee, a credential he has repeated throughout his campaign.

“I think the experience that comes with service on the Defense Appropriation Committee where we analyze the budget request of the president for funding of our Department of Defense and all the related activities coming under their jurisdiction,” Cochran said. “And I think that experience is a very strong asset.”

Congressman Gregg Harper said the mood of the runoff has changed completely, compared to the primary election that Cochran nearly lost.

“What I am encouraged by is what I have seen on the ground for Sen. Cochran in the last week to 10 days. It’s a complete change from what I saw before the primary, and the momentum clearly is with Sen. Cochran,” Harper said.

Cochran’s campaign has tried to broaden its base reaching out to black voters and re-energize apathetic supporters who didn’t vote in the first primary. 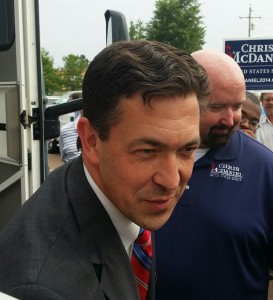 Elsewhere, supporters of state Sen. Chris McDaniel stand next to a busy road on the outskirts of Jackson carrying signs and yelling at passing cars, hoping to attract attention to one of their candidate’s final campaign stops.

Todd Macko of Brandon said he joined the rally because he believes this election is too important to watch from the sidelines.

“We feel that this is a big deal and that it sends a very important message to Washington,” said Macko. “I believe him when he tells me that he is un-lobbyable. I believe when he says he’ll go to Washington and that we won’t do the backroom deals and that he will take the constitution as the playbook for his tenure in office.”

While polling conducted by various conservative groups show that McDaniel commands a lead over incumbent Cochran, the candidate isn’t taking any chances.

Speaking to supporters, McDaniel said the only way to change the status quo in Washington is to vote for him.

McDaniel also took a shot at his opponent for trying to garner the support of Mississippi Democrats. He said it’s further proof that Cochran has become too liberal for average, conservative Mississippians.

“Senator Cochran has showed his true colors,” McDaniel said. “We knew him to be a liberal Republican. By reaching out to liberal Democrats he has confirmed what we’ve always known that he doesn’t have our best interests at heart. The conservative movement needs a champion, someone that will fight, someone that will be courageous. Not someone that will surrender.”

Both Cochran and McDaniel will spend the rest of the day crisscrossing the state hoping to get the support of last-minute, undecided voters.

This story was first published on MPB’s website on June 23 and updated on June 24.

Bus-size asteroid to zoom by Earth, ducking below satellites