BIRMINGHAM, Ala. — A U.S. Senate campaign that was thrust into the national spotlight by allegations of sexual misconduct by one of the candidates is near the finish line.

Here is a look the race between Republican nominee Roy Moore, who spent the final month of the campaign denying allegations of long-ago misconduct involving teenage girls, and Doug Jones, who is seeking to break the GOP’s grip on Alabama and pick up a seat in the Senate for Democrats:

The race is too close to call.

Moore easily defeated Republican Senate appointee Luther Strange in a September runoff election after leading the 10-person field in the primary, and he was on track to win until allegations of sexual misconduct surfaced. Now the race is a tossup.

Polls show Moore and Jones have seesawed for the lead in the final weeks of the campaign, with some showing Moore ahead and others showing Jones in the lead. The race will be decided by which candidate does a better job getting his supporters to actually vote.

WHAT WILL IT TAKE TO WIN?

A plurality of votes, and Republican Roy Moore’s path to victory is wider than that of Democratic opponent Doug Jones.

White, evangelical conservatives make up the core of Moore’s base and Alabama is full of them — President Donald Trump carried 63 percent of the state last year, and he’s still popular with most GOP voters. Moore has to keep those people on his side and get them to the polls without seeing too much erosion among Republicans who simply sit out the election in response to allegations he sexually molested teen girls and tried to date others decades ago.

It’s tougher for Jones, who started from behind since Alabama last sent a Democratic senator to Washington a quarter-century ago and has no Democrats in a statewide office. 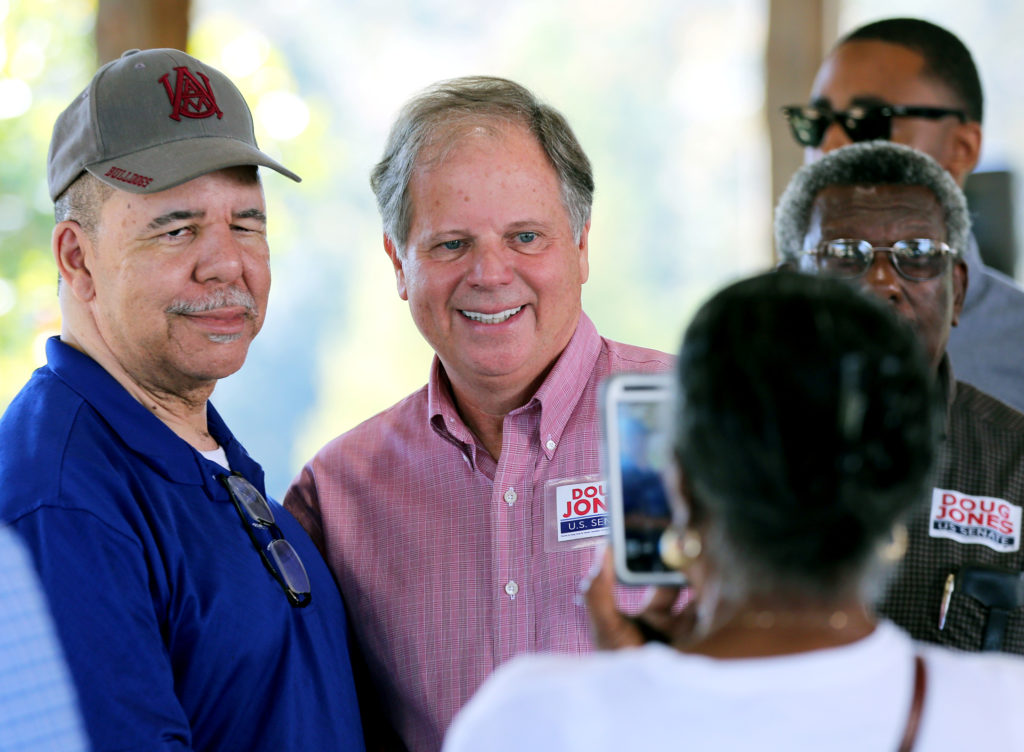 Jones needs to energize the state’s Democratic base, which consists primarily of black voters and white progressives in urban areas, and also peel away some votes that would typically go to a Republican. He tried to do that in the campaign’s closing days by planning events with black leaders and staging concerts by two popular Alabama-based musical acts, Jason Isbell and St. Paul and the Broken Bones.

Write-in candidates could be a factor if the race is close. They’ll only be counted if the total number of write-in ballots exceeds the difference between the top two candidates.

Doug Jones is making is first run for elective office, but Roy Moore has mixed results in statewide elections.

Alabama voters twice have elected Moore to the Alabama Supreme Court, where he won the office of chief justice in 2000 and 2012. He didn’t finish either term after being convicted of violating judicial ethics first for refusing a federal court order to remove a Ten Commandments monument from the state judicial building and again for an order he issued against same-sex marriage.

Moore didn’t fare as well in two runs for the GOP gubernatorial nomination. Moore lost badly to Gov. Bob Riley in a 2006 campaign for the Republican nomination, and he finished fourth in a seven-person primary race in 2010.

In a sign of potential danger for Moore, he only narrowly beat the Democratic nominee in the 2012 race for chief justice. Moore carried 51.8 percent of the vote over Bob Vance, a circuit judge in Jefferson County who entered the race late.

The Alabama Senate race has garnered national attention. The question is whether Alabama residents have been paying attention as college football season winds down and the holiday season cranks up.

The timing of the special election for the seat long held by U.S. Attorney General Jeff Sessions was decided months ago by Gov. Kay Ivey.

Ivey’s predecessor, Robert Bentley, appointed then-Attorney General Luther Strange to the seat and said the election would coincide with the 2018 scheduled elections.

Bentley resigned in April following a scandal and Ivey became governor, rescheduling the election within days after taking office. That means commercials hawking cars topped with red bows are sandwiched between negative ads targeting each candidate.

Write-in ballots could be a factor in a tight race. Several candidates are running write-in bids, and the secretary of state’s office says such votes won’t be counted unless the total number of write-in ballots exceeds the difference between the two leading candidates once other votes are tallied.

Even then, write-in votes wouldn’t be counted until the seventh day after the election, when provisional ballots and absentee ballots cast by military personnel and overseas residents are compiled.