All in for Trump: inside a North Carolina military family’s GOP politics

Editor’s Note: In our report Tuesday night on a North Carolina family that’s supporting Donald Trump, we were continuing a long NewsHour tradition of talking directly to voters.

We want to hear from them, in their own voices, speaking about what motivates their political preferences.

Regrettably, none of us at the NewsHour recognized the questions that could arise from Grace Tilly’s tattoos, and we didn’t raise them with her until after the report aired. At that point, our producer contacted Ms. Tilly and she insisted the tattoos are religious in nature and have nothing to do with a neo-Nazi theme or white supremacy.

We referenced her comments in an editor’s note, posted on our website.

Many of our online commenters have since let us know they reject that explanation. We’re now posting this note as a follow up.

We at the NewsHour remain committed to being as transparent as possible in covering this election.

He’s attacked veterans and women, characterized Mexican immigrants as rapists and drug traffickers, and voiced his desire to punch a protester in the face.

And yet, Donald Trump continues to dominate the GOP presidential race, even bringing scores of new voters into the Republican tent.

The NewsHour traveled to North Carolina ahead of today’s primary contest, which Trump is expected to win easily. The mission: to get to know a few of the voters supporting Trump.

We spent two days with a military family in the military town of Fayetteville, North Carolina. Although their voting history spans the political spectrum, all three generations have come together to support Trump this year.

Pete Tilly is a God-fearing, Harley-riding grandfather of four with a handlebar mustache and an explosive laugh. This is the first time he’s ever volunteered for a political campaign — or, for that matter, openly admitted who he’s voting for. But for the past two months, he’s been clocking 14-hour days at Trump’s Fayetteville headquarters, making phone calls and distributing lawn signs and buttons.

He supports Trump’s plan to build a wall along the Mexican border, and says immigration is one of the main reasons he got involved in the campaign. We asked what he makes of some protesters’ claims that Trump’s rhetoric has racist undertones?

“I hate everybody the same, so I’ll never be racist,” he said, laughing. “All these protesters, and all this stuff, and people saying he’s racist and the Black Lives Matter, you know what? Red lives matter, because we all bleed red.” 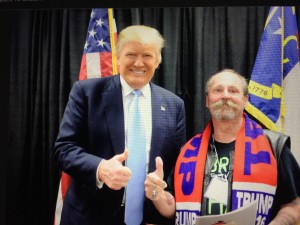 Pete’s son, Farron Tilly, doesn’t agree with everything Trump says. He said he thinks the candidate “needs to be careful” with his plan to ban Muslims from entering the U.S., because “that’s not what this country is about.”

And while he typically considers himself a strong, pro-union Democrat (he helped elect President Obama in 2008), Farron now has his feet firmly planted in Trump’s camp. This election cycle, he says, the country’s problems need addressing “on a much grander scale.”

His wife’s name, Grace, is tattooed in thick cursive on the side of Farron’s neck. They’ve been married for 16 years. Grace (a first-time voter, she’s also supporting Trump) has been looking for work for six months and says they are living paycheck to paycheck at times.

Before the recession hit, Farron was making good money in the marble and granite business. But in recent years, he says, the demand for luxury materials from high-end homeowners has dipped.

An influx of new immigrants has also dramatically changed North Carolina’s demography. From 1990 to 2013, the state’s immigrant population jumped 551 percent.

“There’s all kinds of other people out there, working with the bare minimum tools, doing the job for a quarter of what we used to charge,” Tilly said.

For more on the Tilly family, watch tonight’s PBS NewsHour.

Left: Pete Tilly, a Donald Trump supporter from North Carolina, has been volunteering at the GOP front-runner's headquarters in Fayetteville, N.C. Photo courtesy of Pete Tilly.