All the ambassadors Jeff Sessions met in 2016

Attorney General Jeff Sessions recused himself Thursday from federal probes into Russia, following reports he did not reveal two 2016 meetings with Russian Ambassador Sergey Kislyak in sworn statements to Congress.

The fallout over his testimony, and whether the presidential election was discussed during his conversations with Kislyak, has raised questions about how often senators meet with ambassadors — and under what circumstances it’s appropriate.

House Speaker Paul Ryan said in a news conference Thursday he and Sessions both meet often with ambassadors and foreign leaders as members of Congress. Foreign policy experts told Politifact it’s not abnormal for members of Congress to arrange these kinds of conversations, though they often don’t initiate and sometimes delegate them to an aide.

Democratic lawmakers have pointed to Sessions’ meetings as unusual because of their setting — one during a sideline event to the Republican National Committee and the other in a private meeting in his Senate office — and also because of America’s tense relationship with Russia.

Sen. Claire McCaskill tweeted Thursday she had no call from or meeting with the Russian ambassador in her 10 years on the Senate Armed Services Committee. Her critics were quick to point to two interactions with Russian officials she had chronicled years ago on Twitter; McCaskill said they were part of group discussions and not one-on-one meetings like the one Sessions held in September.

The Washington Post reported that Sessions was the only member of the Senate Armed Services Committee to meet with Kislyak in 2016. The other 25 said they had no interaction with him.

A list of meetings provided to the NewsHour on Thursday by the Department of Justice shows Sessions had 30 meetings with ambassadors in 2016. One of them was with Kislyak. Here’s a list of all of those leaders he met in official meetings in his role as senator; it does not include phone calls or unofficial interactions, like the one Sessions had with Kislyak in July. 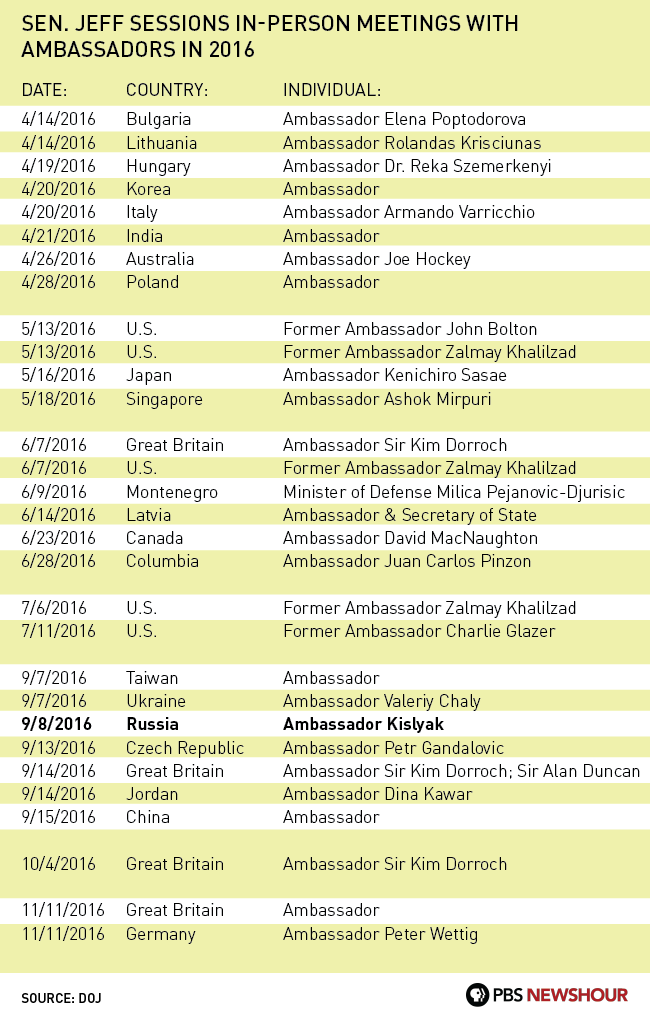 Ryan Holmes reported for this story.