Americans don’t agree on what to call Jan. 6 attack

A year since supporters of former President Donald Trump attacked the Capitol, Americans are split over how to describe what happened on Jan. 6, 2021.

A new poll from the PBS NewsHour, NPR and Marist finds that roughly half of U.S. adults say an insurrection took place that threatened democracy, and about as many say Trump is to blame for those events.

But many Americans have embraced a different narrative about that day, especially when looking along party lines, with 80 percent of Republicans either thinking the events of Jan. 6 were a legitimate act of dissent or should be put aside as something that occured in the past.

“The Republicans have done a pretty good job of trying to downplay what happened last Jan. 6,” said Lara Brown, director of the Graduate School of Political Management at the George Washington University. 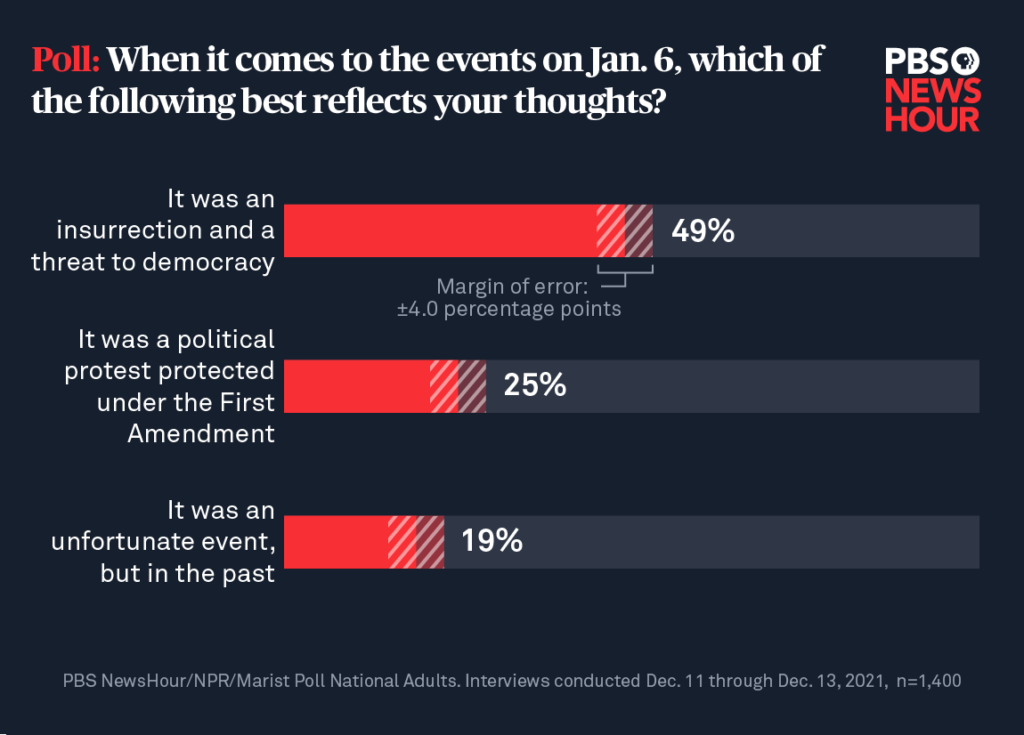 When it comes to building a shared understanding of such a harrowing moment and unifying a deeply divided country, the lack of a “common language” matters, said Barbara Carvalho, who directs the Marist Poll. That absence of consensus so many months later “speaks to our continued disconnect,” Carvalho said.

Overall, 25 percent of Americans say that day’s events amounted to political protest protected under the First Amendment, while 19 percent of adults agree the riots were unfortunate but think the country no longer needs to worry about them.

As members of Congress gathered for the traditional counting of electoral college votes a year ago this week, Trump, defeated in a fair election by Joe Biden, stood in front of his supporters less than a mile away, telling them the vote had been stolen and encouraging them to “walk down Pennsylvania Avenue.”

“We fight, we fight like hell, and if you don’t fight like hell you’re not going to have a country anymore,” Trump said during his “Save America Rally.”

In this latest poll, 89 percent of Democrats, 43 percent of independents and 10 percent of Republicans define the events as insurrection. Suburban voters and white college educated women – two voting blocs that were more likely to support Biden – also closely aligned with Democrats on those feelings.

A year later, Congress is still trying to establish basic facts about the day and how to hold people accountable. A majority of Americans – 62 percent – and nearly all Democrats and 58 percent of independents think it is appropriate for the select committee to investigate the events of Jan. 6.

But another 35 percent of Americans, including 68 percent of Republicans, say further investigation amounts to a “witch hunt.”

Who is to blame?

The percentage of Americans who say Trump was at fault for what happened at the U.S. Capitol has softened since last January. The day after the attack, 63 percent of Americans said they blamedTrump. Today, 53 percent place a good amount of blame on the former president.

That shifting sense of blame is consistent with the narrative around Jan. 6 being recast by political opportunists as protected speech, said Mary McCord, former acting assistant attorney general for national security at the Department of Justice who now teaches at Georgetown Law School. Last year’s attack on the U.S. Capitol is unparalleled in modern history, she said. 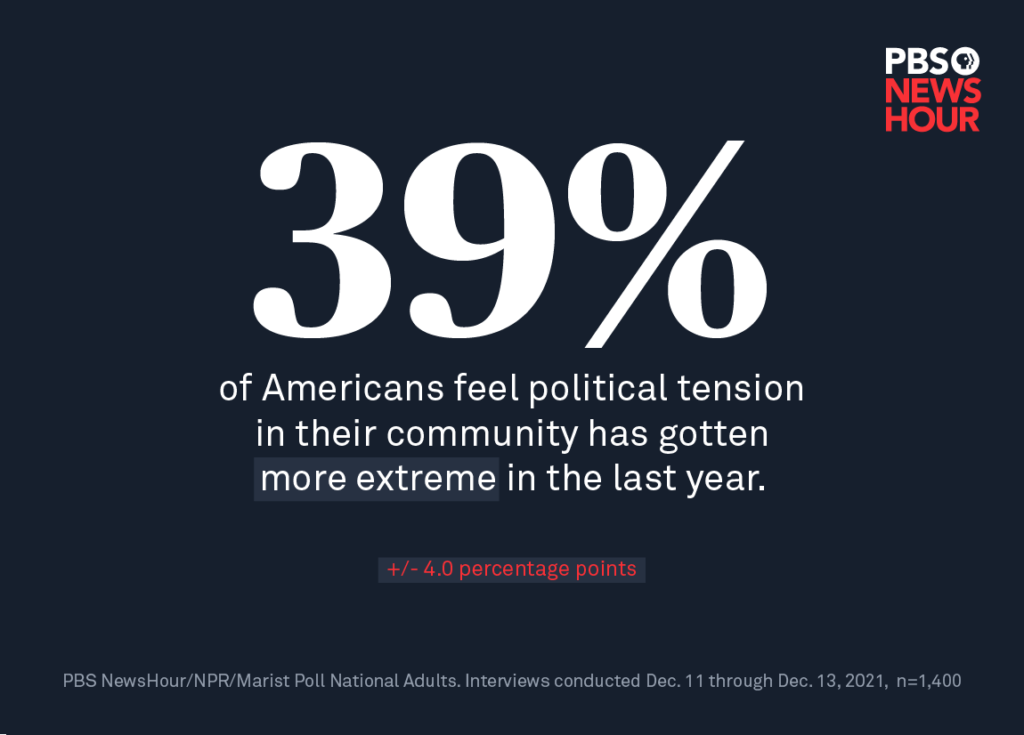 “I don’t think any member of Congress who was there at the Capitol thinks this was an ordinary day of tourism,” McCord said, adding that some who deny what happened or dismiss the investigations “see an opportunity for political gain.”

“This is all part of building up an opportunity for Trump to run again,” McCord said. “Those who might have had one view right after Jan. 6 about him, clearly there’s not an insignificant number of people who changed that view.”

After the House of Representatives impeached Trump for a historic second time in the weeks after the insurrection, the Senate fell short of convicting Trump for the role he played in provoking the crowd. To Brown, that failure “has allowed Trump to maintain much more power than [the lawmakers] thought he would.”

About four out of five Americans say the future of democracy is threatened by the current divisions that hound the U.S., a sentiment that has remained statistically frozen since the Jan. 6 attacks, when 81 percent of Americans felt ill at ease about the nation’s outlook. At the same time, a fifth of Americans say these divisions pose no threat. 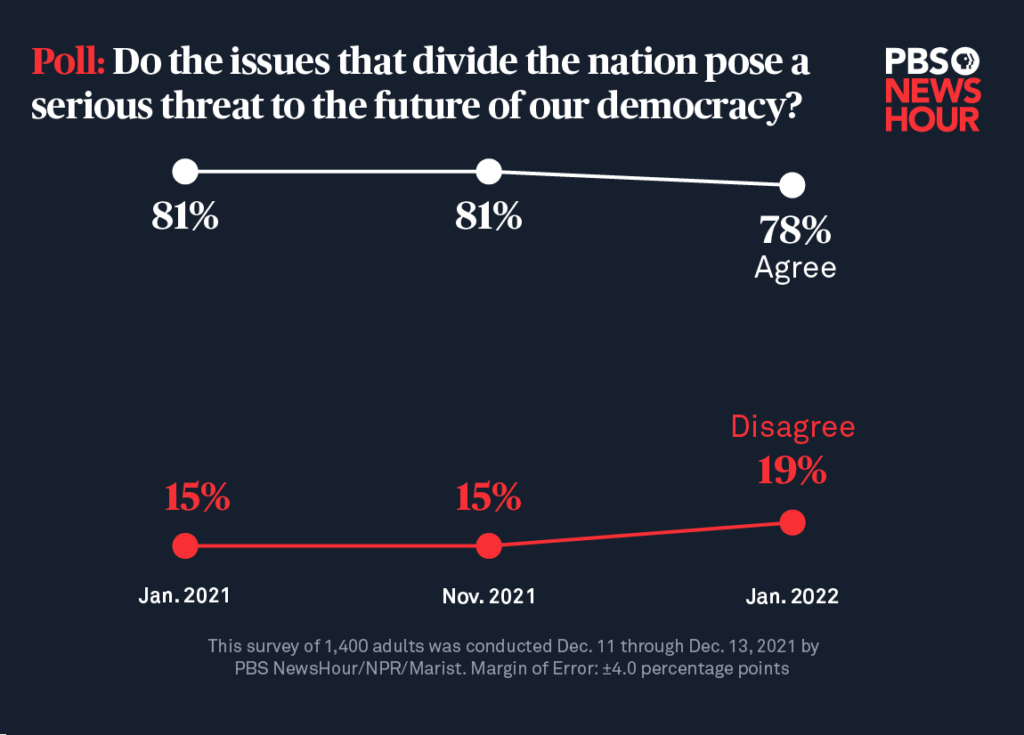 These responses hold steady across political lines. About four out of five Democrats, Republicans and independents agree that the nation’s democracy is in danger, but “the motivation for that answer really differs based on where you sit on the aisle,” said Lee Miringoff, who directs the Marist Institute for Public Opinion. “There’s no comfort out there.”

Brown does not expect that pervasive uneasiness to fade any time soon. The constant state of anxiety – over politics, the pandemic, climate change and more – conditions the public to live as if “everything is a threat,” she said. Brown said she expects the 2022 midterm elections to further inflame that worry.

Though still greatly concerned, younger Americans felt significantly more optimistic about the future of democracy than older generations. In this latest poll, 27 percent of members of Generation Z and millennials felt secure about what lay ahead, compared to 14 percent of Generation X and 13 percent of baby boomers.

Left: FILE PHOTO: An explosion caused by a police munition is seen while supporters of U.S. President Donald Trump gather in front of the U.S. Capitol Building in Washington, U.S., January 6, 2021. Photo by Leah Millis/Reuters