What would it take for a third-party candidate to make it to the White House?

NEW YORK — If given the chance, Gary Johnson and Jill Stein would have used the upcoming debates to remind voters that Donald Trump and Hillary Clinton won’t be the only presidential candidates on the ballot come November.

But Johnson, a former governor of New Mexico and the Libertarian Party nominee, and Stein, who is running on the Green Party ticket, failed to qualify for the presidential debates, which begin next week at Hofstra University on Long Island.

The news, which was announced last week, was not a surprise. Neither third-party candidate came close to meeting the polling threshold of 15 percent to participate in the debates.

Nevertheless, in an election driven by voter frustration with the political establishment, Johnson and Stein could still do reasonably well in November — and potentially play a spoiler role in the final outcome, if the third-party candidates hurt Trump or Clinton in critical swing states. The prospect of a solid showing this year highlights one of the most confounding aspects of American politics: the electorate’s inconsistent, back-and-forth appetite for third-party candidates.

When it comes to non-major-party candidates, differences in political talent and experience help explain why some perform better than others.

But in interviews, political scientists, strategists and current and former third-party nominees all agreed that structural factors — such as access to campaign cash and media exposure — determine whether third party candidates break into the national consciousness or not.

“It has less to do with the characteristics of the individual candidate, and more to do with how well things are going in the country,” said Robert Shapiro, a political scientist at Columbia University. “What it really comes down to is the level of dissatisfaction with government, and whether there’s an open space on the ideological spectrum for a third or fourth-party candidate.”

In an interview on Wednesday, Johnson argued that voters this election were seeking alternative options to avoid supporting Clinton and Trump. “In this case you’ve got the two most polarizing figures of all time and space that are the two major party candidate nominees,” Johnson said.

Third-party candidates have been shut out of the presidency since the rise of the two-party system in the mid-1800s. The most successful third-party candidates in the past century have capitalized on political divisions within the two major parties that came about as a result of economic and cultural turmoil in the country.

Consider Theodore Roosevelt. In 1912, four years after his presidency ended, Roosevelt took advantage of a split in the Republican Party to mount an independent run on the Progressive Party ticket. Roosevelt had unusually high name recognition for a third-party candidate, but still only managed to win six states and 88 electoral college votes, finishing a distant second to Woodrow Wilson.

The next serious third-party challenger, George Wallace, built his 1968 presidential campaign around a strategy of appealing to white Southern Democrats who opposed the party’s embrace of the Civil Rights movement.

Wallace, a former governor of Alabama who was best known for his support of segregation, won a total of five states and 46 electoral college votes. He is the last third-party candidate to sweep a state’s electoral college votes, according to the historian Dan Carter, who has written about Wallace and the rise of modern American conservatism.

But all of Wallace’s victories took place in the Deep South, in states that Richard Nixon was likely to win in a two-way contest against Hubert Humphrey, the Democratic nominee.

Wallace seized on the racial prejudice of the era to run the most successful third-party campaign since Roosevelt’s, but his divisive approach only took him so far. “His main impact was carrying states that probably would have gone for Nixon,” Carter said. “In terms of the final vote, he was a regional candidate.” 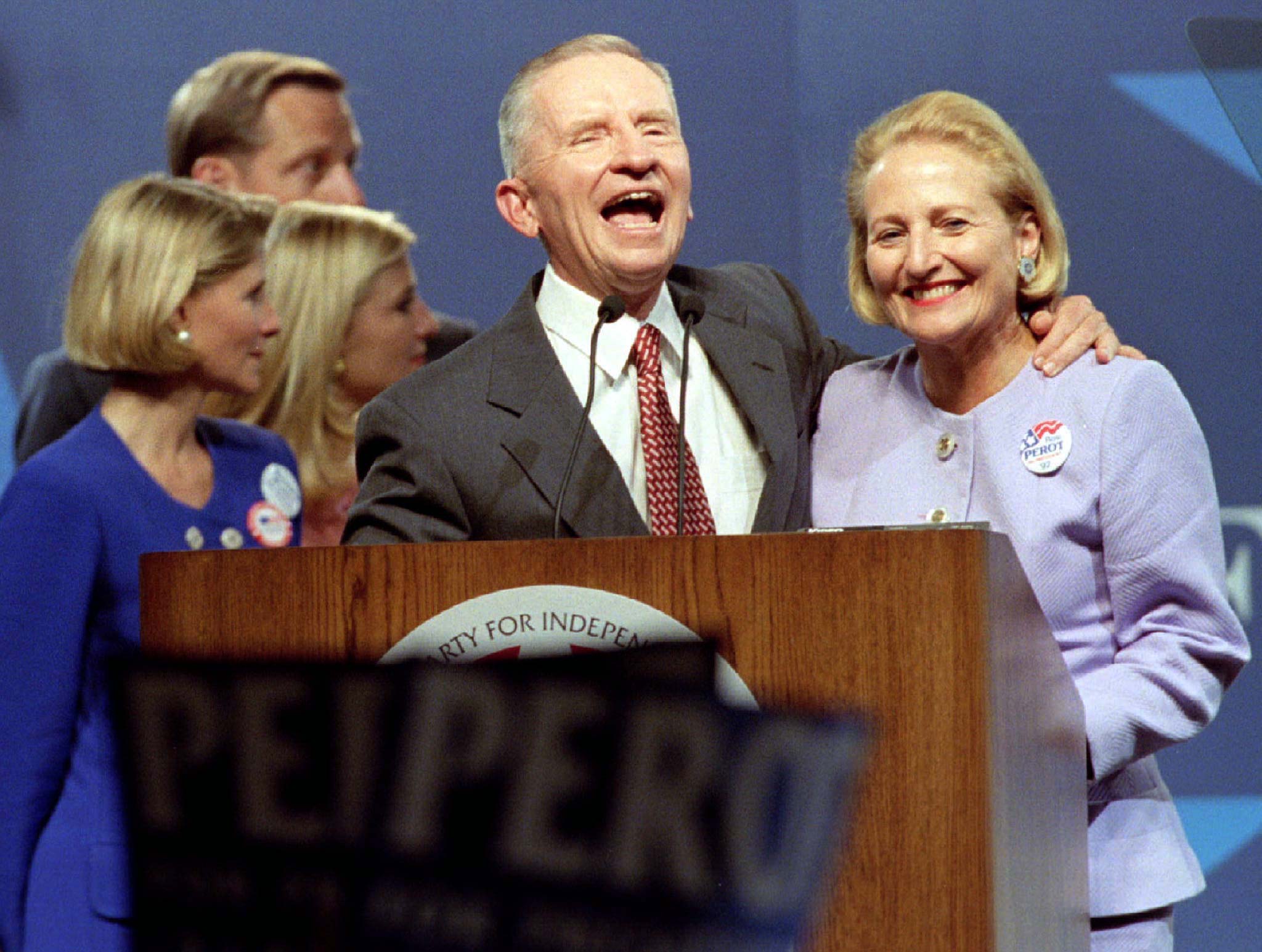 Ross Perot, seen here in 1996, became a household name as a third-party presidential candidate in the 1990s. Photo by Peter Morgan/REUTERS

More than two decades later, Ross Perot turned out to be that rare third-party candidate with true national appeal.

A Texas-born billionaire with no prior political experience, Perot used his wealth to run lengthy, chart-laden campaign ads that raised his standing in the polls in the 1992 presidential election, helping him land a spot in the debates with George H.W. Bush and Bill Clinton.

“He was so weird that he captured the imagination. His tone of voice, his style, we’d never seen anything like it before,” said Bill Miller, a veteran lobbyist and political observer in Texas.

Perot was a gifted performer. But he also benefited from events at the time that created a unique opportunity for a plainspoken, outsider candidate to step in and challenge the status quo. In 1992, the economy was mired in a recession; Republicans were upset with President Bush for breaking his campaign promise not to raise taxes; and many voters were eager for a change after 12 years of Republican rule in the White House.

“For a third-party person to be successful, there has to be voter anger, and the candidate has to channel that,” Miller said. “And that’s not easy. That’s why most of them are unsuccessful.”

That fall, Perot won 19 percent of the popular vote, the second-highest total for a third-party candidate in modern U.S. history (after Roosevelt, who won 27 percent in 1912). But because Perot’s supporters were evenly distributed around the country, he failed to win a single electoral college vote. He fared even worse in his second presidential campaign four years later.

Perot “was so weird that he captured the imagination. His tone of voice, his style, we’d never seen anything like it before.”

The most famous American third-party presidential candidate, arguably, is Ralph Nader, whom many Democrats still blame for the outcome of the 2000 presidential race.

Running as a Green Party candidate, Nader received 2.7 percent of the popular vote, a fraction of George W. Bush and Al Gore’s support. But Nader won about 97,000 votes in Florida, which Bush ultimately carried by just 537 votes after a recount battle that reached the Supreme Court.

Nader’s critics have long argued that Gore would have also won the state of New Hampshire, and avoided a recount, if Nader had not been on the ballot and a majority of the state’s Green Party supporters had backed the Democratic nominee.

Nader defended his 2000 campaign in an interview on Monday in New York, arguing that the race in Florida was decided by the thousands of Democratic voters who crossed party lines to support Bush.

In reflecting back on that race, and his subsequent, less-controversial White House bids in 2004 and 2008, Nader blamed the two major parties and the media for making it difficult for third-party candidates to compete in presidential elections.

Nader cited a study in a book by the academics Stephen Farnsworth and S. Robert Lichter that found he received just three minutes of speaking time on the evening news shows of the three major broadcast networks between Labor Day and Election Day in 2000. During that same time period, ABC, NBC and CBS broadcast a combined 53 minutes of uninterrupted speech by Gore, and 42 minutes by Bush.

Farnsworth, one of the report’s co-authors and a political science professor at the University of Mary Washington, confirmed the statistics in a phone interview.

“What’s very clear is that reporters focus on the two major-party candidates. So if you’re a third-party candidate and you don’t posses the vast personal fortune of a Ross Perot, you’re going to be ignored,” Farnsworth said. “Presidential candidates who do not have a D or R after their name are finished before they even start.”

Terry Holt, a former top Bush campaign adviser, argued that Nader wasn’t a factor in the race. “There’s always an undercurrent of dissatisfaction with the major party candidates,” Holt said. “Al Gore had a weak spot in his base of support that he could never close.”

In the interview with PBS NewsHour, Nader, who is 82, focused on the media’s role in covering third-party presidential candidates. But he also acknowledged that he could have chosen to run more traditional campaigns that centered on a few signature issues. 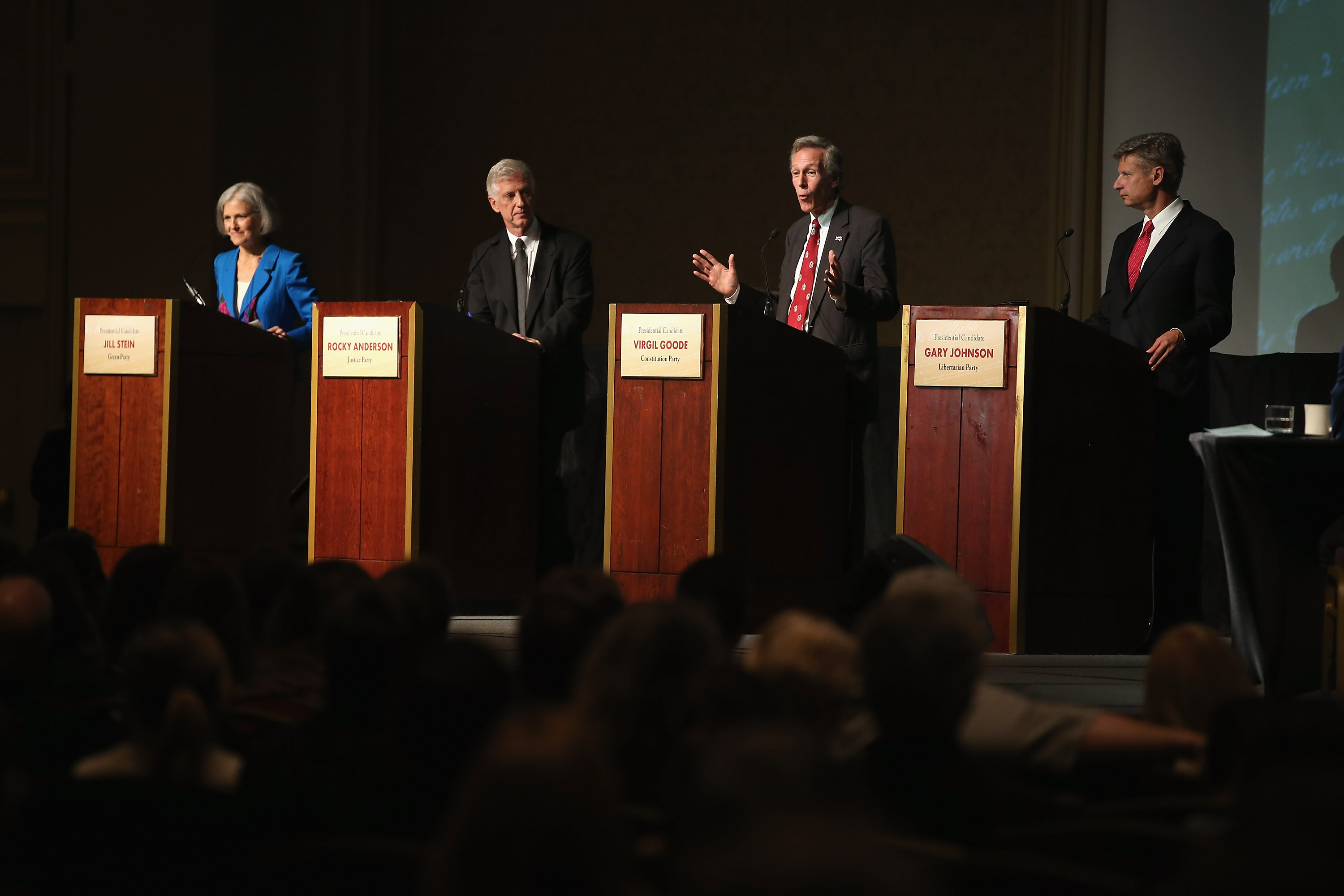 Johnson and Stein have largely followed Nader’s make-a-declaration approach in 2016. It may not have gotten them into the debates, but Johnson is averaging around 8 percent in national polls, and Stein is polling around three percent. In one Quinnipiac University survey earlier this month, they polled a combined 17 percent — nearly the total Perot received on Election Day in 1992.

With seven weeks left in the race, it’s still too early to tell what the third-party effect will be. But if Johnson, who is polling better than Stein, maintains his current level of support, he could change the outcome in some key battleground states.

In Florida, Clinton and Trump were tied at 43.3 percent in a national average of polls taken in the first three weeks of September. Johnson averaged 6 percent, more than enough to sway the race towards one of the major party nominees. Johnson is currently polling at roughly 8 percent in Ohio, another crucial swing state that has tightened in recent weeks.

But experts cautioned that many polls inflate the public’s support for third-party candidates.

“In a poll, the voter is offered the candidates’ names; this isn’t the same thing as what a random voter may know,” Micah Sifry, the author of “Spoiling for a Fight: Third-Party Politics in America”, wrote in an email.

He added, “while many voters may be unhappy with the choice of Trump or Clinton, not that many are aware of Johnson or Stein, because they have little money or visibility. That’s why typically third-party presidential candidates always underperform their polling.”

Sifry noted that Perot was the sole exception.

But Shapiro said that doesn’t guarantee the next generation of third-party candidates will be any more successful than the last.

“What makes it imprecise is that you don’t know what would happen if [third party candidates] weren’t on the ticket. Would people vote for the mainstream candidates or not vote at all?” he said. “There’s no science.”

Left: Ralph Nader steps from the podium after announcing his presidential campaign on February 21, 2000 in Washington, DC. Photo by CHRIS KLEPONIS/AFP/Getty Images)