An Election Off the National Radar 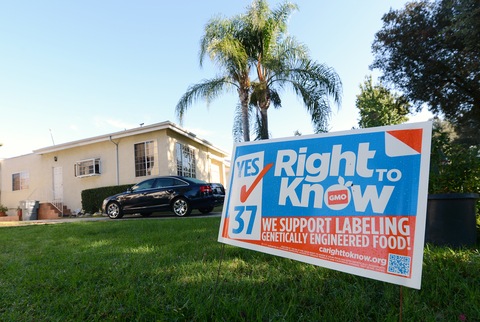 A sign supporting Proposition 37, which calls for the mandatory labeling of genetically engineered foods, is seen in front of a home in Glendale, Calif., on October, 19, 2012. California could become the first state to enforce labeling of genetically modified foodstuffs also know as GMOs. Photo by Robyn Beck/ AFP/ Getty Images.

You might think Californians would feel slighted this election season. In the presidential race, the nation’s largest state is solidly in the blue column; the candidates rarely travel to the west coast, except to fundraise, mostly in well-heeled Silicon Valley, San Francisco or Hollywood. San Franciscans and Angelenos almost never see a TV commercial for Mitt Romney or Barack Obama; why waste money where the outcome is not in doubt?

And the race for California’s U.S. Senate seat is a sleeper as well. Democratic Sen. Dianne Feinstein is 19 points ahead of her under-financed, almost unknown rival, Republican Elizabeth Emken. So Californians must be bored this time of year, right?  Wrong.

For one thing, Californians are as passionate about the presidential election as anyone else; it’s just that the polls show President Obama 13 to 18 points ahead. Thousands of Californians are traveling to or phoning battleground states, especially nearby Nevada, to help get out the vote and boost their candidate.

But still, the election seems very real, even without the candidates or the commercials.  And that’s because there are 11 hotly contested propositions on the California ballot and a slew of Congressional races that are actually competitive for the first time in years due to re-alignment of district boundary lines.

Top issues: the death penalty, the so-called “three strikes” law, and higher taxes to support schools. Californians are being asked if they want to eliminate the death penalty and replace it with life without parole. That measure, Proposition 34, is rated close.

And there’s Prop. 36, which would, if passed, allow for the resentencing of inmates serving life sentences if their third strike was not a serious or violent crime. The measure is leading in the polls with 73 percent of voters favoring it. If it wins, it would be the first crack in the three strikes law, which has long been regarded (along with Proposition 13) as a third rail of California politics. Californians have demonstrated time and time again at the polls that they want to be tough on crime. So a vote to modify three strikes would be quite a change and could open the door to further modifications.

Then there’s Gov. Jerry Brown and his plan to find some money to pay for California schools and colleges, reduce the budget deficit and stabilize a floundering state.  It’s called Proposition 30, and the governor has been relentlessly campaigning up and down the state to get it passed. The problem, some voters say, is that it raises taxes. It adds a quarter of a cent to the sales tax for four years, and it raises the personal income tax rate on individuals making more than $250,000 and couples making more than $500,000 for the next seven years.

Californians have been bombarded by TV commercials saying this is the only way to save the schools from kindergarten to university, whose funding has been cut to the bone the last few years, as state revenues dropped as a result of the recession. If Prop. 30 doesn’t pass, the governor argues, more cuts to the schools will be automatically triggered, further plunging the state’s education system into chaos and mediocrity.

A fly in Brown’s ointment is a rival measure on the ballot: Prop. 38, which has been financed by millionaire attorney Molly Munger, and which will also raise taxes, to benefit early education and K-12 schools. Two feuding measures on the same ballot could spell trouble for them both, so the governor has been trying to discourage voters from voting for 38.

Support for Munger’s measure has been tepid. Prop. 30, on the other hand, has been leading, though in the last few weeks it seems to have lost ground, and is rated about even. Prop.30 means a lot to the governor, who has been unable to get Republicans in the state legislature to raise taxes for anything, even failing schools.

On the same ballot is a measure that mandates that all genetically modified foods be labeled. Farmers and grocery stores oppose the idea as unnecessary; some environmentalists are fighting hard for it. It’s a hotly contested measure that some folks are passionate about.

Meanwhile, congressional candidates are fighting it out around the state, with a few incumbents in both parties in jeopardy. Republican Rep. Dan Lungren from Sacramento is facing a strong challenge from Dr. Ami Bera, a Democrat, who narrowly lost two years ago.Â  Democrat Rep. John Garamendi, a longtime California politician, is hoping to beat Kim Vann in the Central Valley; and Democratic Rep. Pete Stark, who is 80 years old and in his 19th term in Congress, is facing a strong challenge from a fellow Democrat, Eric Swalwell, a prosecutor in Alameda County. The fact that two Democrats are facing off against each other reflects a new law that allows the top two vote-getters in the primary, regardless of party, to be on the ballot in the general election.

Who wins these and other contested seats in California and elsewhere could decide if the Democrats can re-take the House, or if the Republicans will remain in control.

So Californians have plenty to think about this election season. Don’t feel sorry for them.