WASHINGTON — Wednesday was supposed to be the day Donald Trump clarified his immigration stance. But in a key speech on that subject, he misstated facts about immigration policy, life for those in the country illegally and their impact on the U.S. economy.

A look at some of his statements in an Arizona rally in the evening and after a meeting earlier in the day with Mexico’s president:

TRUMP: “President Obama and Hillary Clinton have engaged in gross dereliction of duty by surrendering the safety of the American people to open borders.”

THE FACTS: Trump actually praised President Barack Obama in the past for deporting an unprecedented number of people during his first term, a record that does not square with an accusation of supporting an “open” border.

Obama increased Border Patrol staffing to an all-time high of 21,444 agents in 2011 and his administration has virtually ended the practice of “voluntary returns,” or turning back Mexicans without any consequences.

Both Obama and Clinton support a more lenient policy than Trump has proposed, but what they lay out is not an open border.

Clinton has promised to extend Obama’s actions that would let people brought to the country illegally as children remain in the country, as well as to let some parents of U.S. citizens stay. Both seek legislation that would allow most of the estimated 11 million immigrants in the country illegally to stay if they pass a background check, learn English and pay taxes. However, those who fail the background check or commit crimes would be deported.

TRUMP, on people illegally in the U.S.: “They’re treated better than our vets.”

THE FACTS: People in the country illegally do not have the right to work, vote or receive most government benefits. A modest number have been exempted from deportation because of an Obama administration action but most live under the risk of being removed from the country.

Veterans are guaranteed government health care and because almost all are citizens, the right to vote and other government benefits.

The quality of their care has been criticized by Trump and others but people in the country illegally do not have equivalent rights to health care, except for emergency treatment. Public hospitals are required to provide emergency medical care regardless of immigration status.
___

TRUMP: “When politicians talk about immigration reform they usually mean the following: amnesty, open borders, lower wages … It should mean improvements to our laws and policies to make life better for American citizens.”

THE FACTS: No politician of either party who supports overhauling immigration laws supports “amnesty,” but the meaning of “amnesty” varies depending on who is talking.

The sweeping and bipartisan immigration bill that passed the Senate in 2013 was derided by opponents as amnesty, but supporters including GOP Sen. Marco Rubio of Florida disputed that, noting numerous requirements imposed on immigrants in the country illegally along a 13-year path to citizenship, including paying penalties.

The bill proposed spending tens of billions of dollars to double the number of U.S. Border Patrol agents and greatly increase border security. And the nonpartisan Congressional Budget Office studied the bill and projected that it would lower wages for the entire workforce slightly over the first 10 years after becoming law, but would then increase wages for the entire workforce by even more, at the same time boosting economic output and increasing the GDP.

TRUMP, on the number of people in the U.S. illegally: “Our government has no idea. It could be 3 million, it could be 30 million. They have no idea.”

THE FACTS: The government actually has an idea. The Homeland Security Department estimates there are 11.4 million people in the United States illegally. Few in the immigration debate challenge that estimate.

The figure comes from an analysis of the most recent Census Data. The government compares the number of people whom the Census reports as foreign-born with the number of people who have been admitted legally and gained citizenship. The most recent estimate dates to January 2012. It roughly matches the estimates of demographers from the Pew Foundation, which issues its estimates more rapidly than the government.

Experts believe the number of people in the U.S. illegally has been steadily declining as Mexicans and others return to their home country and illegal border crossings dwindle.
___ 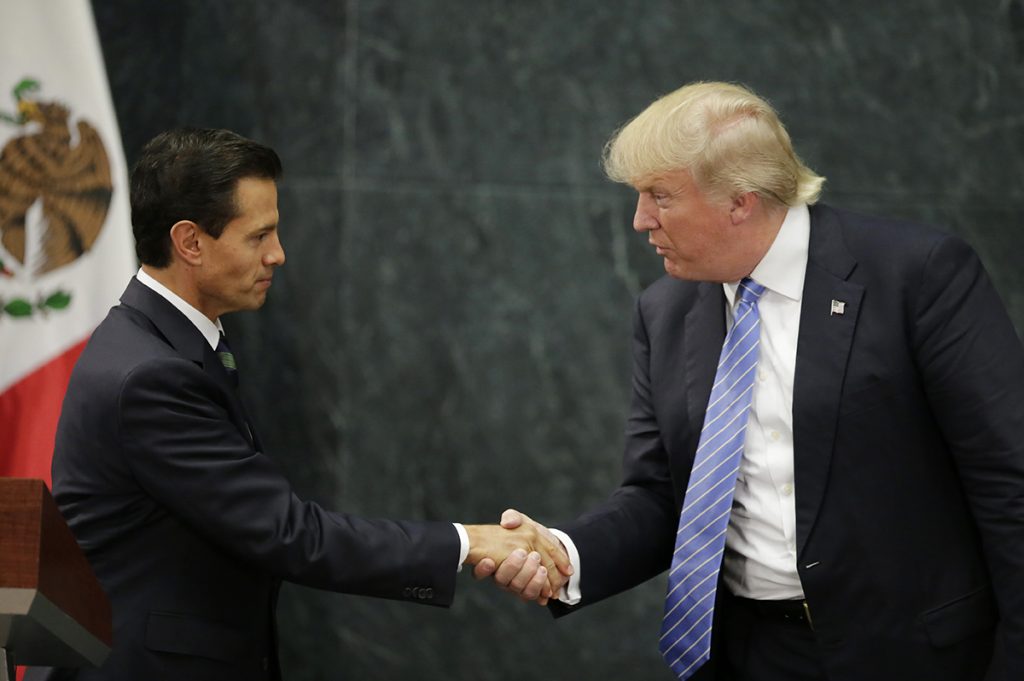 TRUMP, on ending the practice of releasing people who are caught crossing the border illegally, pending a court appearance: “We are going to end catch-and-release … Under my administration, anyone who illegally crosses the border will be detained until they are removed out of our country and back to the country from which they came.”

THE FACTS: Many of the releases in question were ordered by courts. They were not a policy of the Obama administration.

A federal judge in Los Angeles ruled last year the federal government’s detention of children and their mothers who were caught crossing the border illegally violated a 1997 court settlement. In July, an appeals court narrowed the scope, saying children must be quickly released but not their parents. From October through July, 48,311 unaccompanied children were arrested crossing the border from Mexico; many more children were caught with their families.

Many crossing the border illegally claim asylum, which must be adjudicated by an immigration judge. People can claim asylum because they are being persecuted or fear persecution on grounds of race, religion, nationality, membership in a social group or political opinion.

TRUMP, on preventing people from overstaying their visas and remaining in the country illegally: “We will finally complete the biometric entry-exit visa tracking system, which we need desperately. For years Congress has required biometric entry-exit visa tracking systems but it has never been completed. The politicians are all talk, no action. Never happens, never happens … In my administration we will ensure that this system is in place.”

THE FACTS: Trump is correct in focusing on visa overstays as a source of much illegal immigration. The biometric system he wants to complete, though, presents enormous logistical, technical and financial challenges, and he gave no details how he would address it differently than his predecessors.

Congress mandated the system first in 1996 and only now has the Obama administration begun implementing it on select flights at nine airports and at a border crossing between San Diego and Tijuana, Mexico.

The scope of the problem is immense – and not one that Trump’s proposed border wall could fix.

TRUMP, after meeting Mexican President Enrique Pena Nieto: “I shared my strong view that NAFTA has been a far greater benefit to Mexico than it has been to the United States and that it must be improved upon. … I expressed that … we must take action to stem this tremendous outflow of jobs from our country. It’s happening every day, it’s getting worse and worse and worse, and we have to stop it.”

THE FACTS: The loss of manufacturing jobs is generally attributed to China, not Mexico.

Some U.S. companies have moved jobs to Mexico — the Carrier Corp. recently decided to relocate an air conditioning factory there from Indiana. But there is little data to show that the trend is getting “worse and worse.”

No reliable annual measures exist of job flows between the U.S. and Mexico. The United States hemorrhaged manufacturing jobs from 2000 to 2010, when more than 5.5 million were lost, but most economists blame the emergence of China as a manufacturing powerhouse and the increasing automation of many factories.

Recently, manufacturing has done a bit better: Since 2010, U.S. manufacturing jobs have increased by about 900,000. And many economists credit NAFTA with helping the U.S. auto industry by providing a cheap source of parts that otherwise might have been sourced in China. A report by the Center for Economic and Policy Research argued that imports of subsidized U.S. agricultural products put as many as 2 million Mexican farmers out of work. And since NAFTA’s implementation in 1994, Mexico has grown more slowly than many of its Latin American counterparts.

PENA NIETO on Twitter, in Spanish: “At the beginning of the conversation with Donald Trump I made it clear that Mexico will not pay for the wall.”

THE FACTS: The facts may depend on what your definition of a discussion is. If the Mexican president opened with a comment that his country won’t pay for the wall and Trump did not respond to it, that may not have been a discussion in his mind. But the subject, it seems, came up. The Trump campaign’s brief statement on the meeting did not quibble with Pena Nieto’s account. It said the meeting “was not a negotiation.”