WASHINGTON (AP) — President Donald Trump is, at once, demanding billions of dollars from the U.S. Treasury for a border wall and insisting the wall won’t really cost America anything.

As he’s done before, Trump argued Wednesday that Mexico is footing the bill thanks to a revised trade agreement. That’s not true. If the wall is to be built, the money will need to come from Washington’s coffers and be approved by Congress. There is no mechanism in the trade agreement or anywhere else for Mexico to pay back the U.S. or for the money to be refunded to the Treasury.

READ MORE: 4 myths about how immigrants affect the U.S. economy

Trump also vastly overstated the number of people who are thought to be in the country illegally, retroactively declared that his defense chief who resigned was pushed out and raised what appear to be thin hopes for cheaper drug prices.

A look at some of his statements Wednesday on Twitter and at a Cabinet meeting:

TRUMP, on the number of immigrants living in the U.S. illegally: “I used to hear 11 million all the time. It would always stay right at 11. I said, ‘Does it ever increase or go down?’ ‘No, it’s 11.’ Nobody knows. It’s probably 30, 35 million people. They would flow in, mostly from the southern border, they’d come in and nobody would talk about it, nobody would do anything about it.” — Cabinet meeting.

THE FACTS: It’s nowhere close to 30 million to 35 million, according to his own Homeland Security secretary as well as independent estimates.

The nonpartisan Pew Research Center estimates there were 10.7 million immigrants in the U.S. illegally in 2016, the most recent data available. Advocacy groups on both sides of the immigration issue have similar estimates.

According to Pew, the number of immigrants in the U.S. illegally had reached a height of 12.2 million in 2007, representing about 4 percent of the U.S. population, before declining in part because of a weakening U.S. economy. 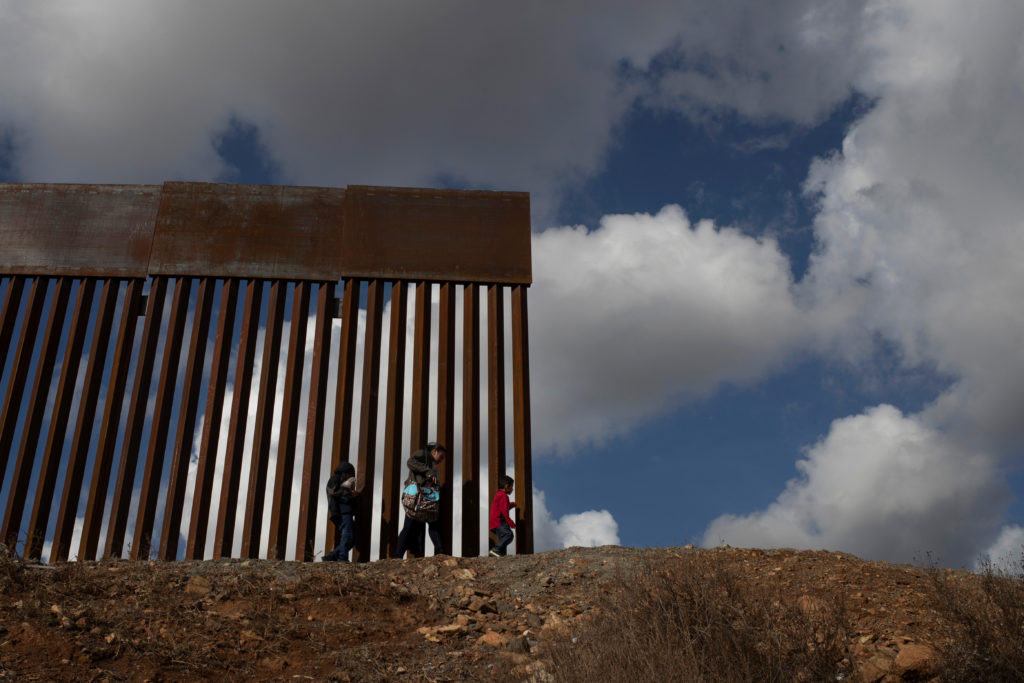 Migrants from Guatemala seeking asylum, walk to the edge of the border wall before illegally crossing into the United States from the outskirts of Tijuana into San Diego County Dec. 1, 2018. Photo Adrees Latif

THE FACTS: This does happen, though it’s not as common as Trump suggests by talking about it so often.

He is referring to adults who come with children they falsely claim to be theirs, so that they won’t be detained under a no-child-separation policy.

But such cases of fraud are rare. According to the Homeland Security Department, about 500 immigrants were found to be not a “legitimate family unit” and thus separated upon detention from April 19 to Sept. 30 of last year. That’s a small fraction of the 107,000 families apprehended in the last budget year, which ended Sept. 30.

THE FACTS: Prices continue to rise. Administration policies announced last year and currently being completed don’t seem to have shifted that trend.

Figures on U.S. prescription drug price changes compiled by health data company Elsevier show that from Dec. 20 through Jan. 2, there were 1,179 product price changes. Of those, 30 were price cuts and the remaining 1,149 were price increases, with 328 of them between 9 percent and 10 percent. All but one of the rest were by lower percentages. Elsevier spokesman Chris Capot said more companies will be announcing price increases this month.

Separately, a data firm whose software can help patients find the most cost-effective medications says its information shows price increases on many commonly used drugs for conditions such as high blood pressure and diabetes.

“In the first two days of January, prices have increased on more than 250 different products,” said Michael Rea, CEO of Rx Savings Solutions. The average increase is about 6 percent, he added. 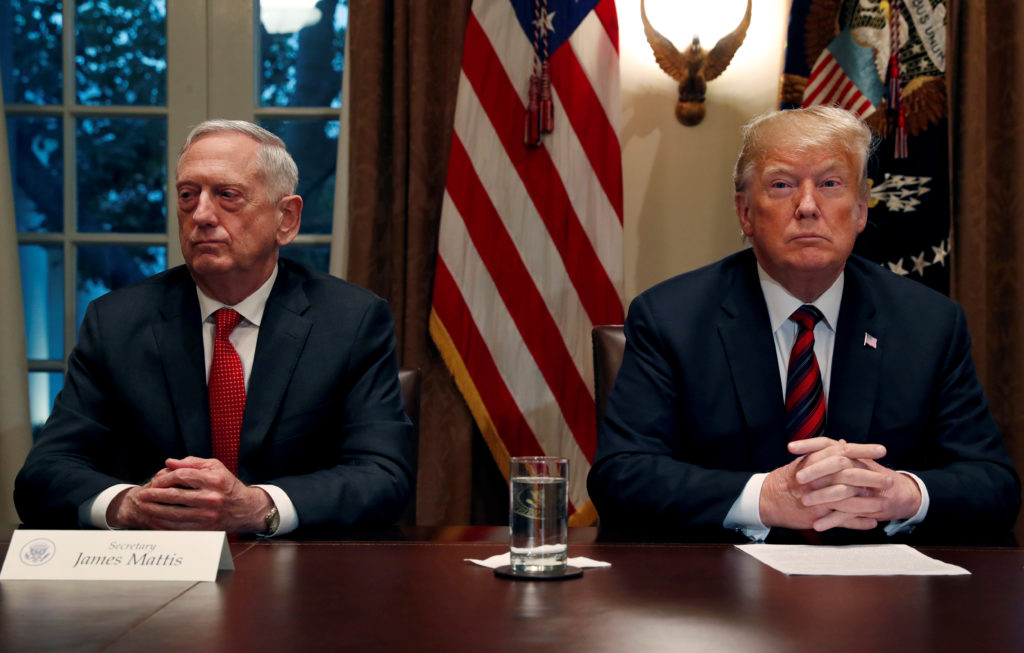 President Donald Trump speaks to the news media while gathering in October for a briefing from his senior military leaders, including then-Defense Secretary James Mattis (L), in the Cabinet Room at the White House in Washington, D.C. Photo by Leah Millis/Reuters

TRUMP, on Jim Mattis: “I wish him well. I hope he does well. But, as you know, President (Barack) Obama fired him and essentially so did I. I want results.” — Cabinet meeting.

THE FACTS: Actually, Mattis resigned as defense secretary in protest over Trump’s decision to pull U.S. troops from Syria.

READ MORE: Mattis is leaving. What does that mean for Trump?

The retired Marine general announced on Dec. 20 in a resignation letter that he was stepping down after Trump’s decision to withdraw 2,000 U.S. troops from Syria. Mattis said he would stay on the job until the end of February. Three days later, Trump abruptly said he was replacing Mattis with the second-ranking defense official, Pat Shanahan, on Jan. 1.

As to the tenure under Obama, Mattis served as commander of the military’s Central Command. He departed a few months earlier than expected in 2013, in part because of disagreements over Iran.

TRUMP: “Mexico is paying for the Wall through the new USMCA Trade Deal. Much of the Wall has already been fully renovated or built. We have done a lot of work. $5.6 Billion Dollars that House has approved is very little in comparison to the benefits of National Security. Quick payback!” — tweet.

THE FACTS: Mexico isn’t paying. It’s also not true that there’s been much construction beyond fencing erected during previous administrations; some renovation of the existing barrier has been achieved.

Trump is arguing, in essence, that the updated trade pact with Mexico and Canada, known as the U.S.-Mexico-Canada Trade Agreement, will yield economic benefits to the U.S. that, years from now, will cover the unrelated costs of the wall today. That assertion doesn’t hold water even with those who support his push for a wall. He went further at a Cabinet meeting Wednesday, contending the wall will pay for itself on a “monthly basis.”

The new trade deal won’t change that much from the previous North American Free Trade Agreement. The three countries would continue trading in an environment of mainly low or no tariffs, with certain improvements for all three partners from the terms of NAFTA. Moreover, the new deal isn’t in effect. It’s awaiting ratification from legislative bodies in each country, and that is not assured.

There is no credible way for Trump to forecast additional growth covering costs that are being charged to U.S. taxpayers if the wall is built. Trade balances depend on too many factors — consumer tastes, exchange rates, overall economic performance and the choices of thousands of companies, for example — and some are well outside any government’s control. Trump specifically promised in his 2016 campaign that Mexico would pay for the wall. It is not doing so.

Trump’s case is also built on a mischaracterization of trade balances. Unlike economists and governments, he considers a trade deficit to be a payment to the exporting country. By that argument, if a trade deficit shrinks, the U.S. is saving money. But that’s not how trade works. Consumers create a trade deficit by buying products made abroad. They get value for their purchase — the products — and are not giving money away.

Trump’s claim that much of the “Wall has already been fully renovated or built” is only supported when counting work done by past administrations and ignoring the fact that fences are not the towering walls he promised. The 2006 Secure Fence Act has resulted in about 650 miles (1,050 kilometers) of border barrier. Money approved by Congress in March 2018 is to pay for 84 miles (135 km), but that work is not done.

Trump’s point that the national security benefits would outweigh the economic cost is a legitimate one to debate. But the notion that U.S. taxpayers would not be covering the cost is baseless.