Apple and Samsung Face Off in Court 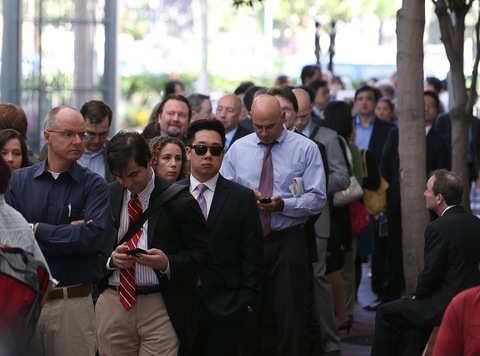 People line up to enter the Robert F. Peckham Federal Courthouse on July 30, 2012 in San Jose, Calif. (All photos by Justin Sullivan/Getty Images)

The high-stakes trial between Apple Inc. and Samsung Electronics Co. geared up Monday as jury selection for the patent infringement case commenced in federal court in San Jose, Calif. 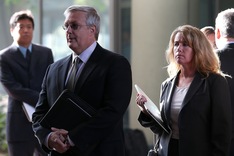 Last year, Apple filed a lawsuit against Samsung, stating its competitor had replicated iPhone and iPad design for its own line of smartphones and tablets. Samsung rebutted, claiming the disputed products are based on industry standards, not Apple technology.

Apple is asking for $2.5 billion in damages, making this the largest patent-related case to date. The most at stake, however, is dominance over the U.S. computer tablet and smartphone markets, which could be shaped by the court’s final decision.

To learn more about the trial and see a picture of Samsung and Apple smartphones side-by-side, check out this morning’s NPR post.

Tune-in to Monday’s PBS NewsHour for detailed analysis of the case and discussion of possible implications.