Are there echoes of George Wallace in Trump’s message?

ATLANTA — One presidential candidate pledged to “Stand up for America.” Two generations later, another promises to “Make America Great Again.” Their common denominator: convincing certain Americans that their version of the United States is under threat.

Donald Trump, leader for the 2016 Republican presidential nomination, has never said he’s following the playbook of Alabama Gov. George Wallace, who achieved national stature on his promise of “segregation now, segregation tomorrow and segregation forever,” then made four failed bids for the White House from 1964 to 1976.

Instead, Trump invokes the anger of “the silent majority,” a phrase he’s resurrected from the era of Wallace and President Richard Nixon, who won in 1968 and 1972 in part by co-opting Wallace’s racially charged populism.

Trump detractors hear more than a faint echo of Wallace in Trump’s anti-establishment mix of economic protectionism and blunt nativism, and they note that the brash billionaire, like Wallace, has drawn similar results in the campaign: tense rallies that often involve violent clashes among protesters, police and the candidate’s supporters.

“Trump is taking his campaign straight to the haters, and he’s gotten the roots of that old Wallace crowd,” says Joe Reed, a black Democratic Party broker in Alabama who came to know the four-term governor toward the end of his life, when he had abandoned his segregationist positions, long after a would-be assassin left him paralyzed. 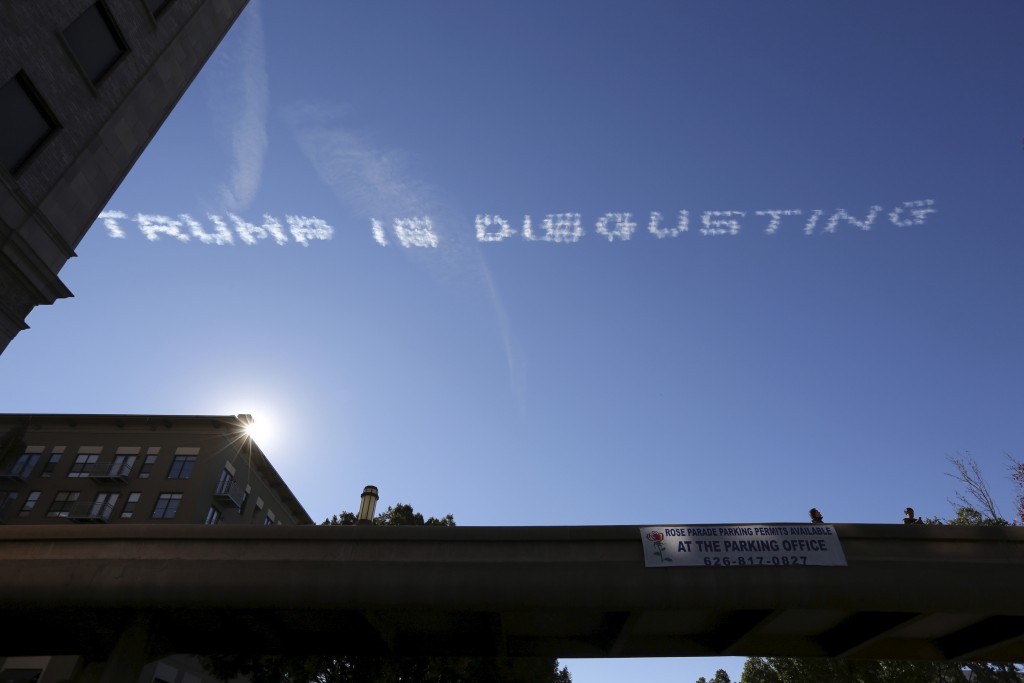 Donald Trump has never said he’s following the playbook of notorious segregationist George Wallace, but many compare the GOP candidate to the Alabama governor. Photo by David McNew/Reuters

“George Wallace was a racist,” said Debbie Dooley, a national tea party leader. “It’s totally ridiculous for anybody to think the same about Donald Trump.” She argues Trump’s independence from “the money that controls Washington, D.C.” outweigh his caustic rhetoric on immigration, Muslims and the protesters — many of them young and black — who interrupt his rallies.

“Donald Trump is not preaching hate,” Dooley said. “He’s standing up for the American workers and the American people.”

Trump offers his outsized personality as an all-purpose antidote to a country that is “falling apart” and “never wins anymore.”

The overwhelmingly white throngs at Trump rallies roar at his mention of a border wall and heartily approve his call to stop all non-citizen Muslims from entering the United States. Supporters cheer his promises to protect gun rights and share his lament that Christianity is under attack. They applaud his threats of punitive tariffs on imports from countries “killing us on trade.”

Wallace, meanwhile, fueled his strongest campaigns in 1968 and 1972 with a wide-ranging critique of a society in decline. He modified the overtly racist language he used in his Alabama campaigns, fashioning himself instead as a “states’ rights” conservative. He complained of rising crime and a “sick Supreme Court” that outlawed compulsory school prayer and allowed pornography.

Wallace, political historian Dan T. Carter said, “had all these ways of getting across what he meant” without explicitly mentioning race or class. “He said ‘inner-city thugs,’ and everybody knew he was talking about young black men in the cities.”

Tom Turnipseed, who managed Wallace’s 1968 campaign and became a civil rights activist, assigned the same motivation to Trump and Wallace. “Fear,” he told The Associated Press.

“You can scare folks with that line that the Mexicans are coming because everyday working people … see Mexicans in the labor market and it hurts their wages — they think of it that way, at least,” Turnipseed said. “Governor Wallace, you know, did the same with African-Americans.”

In his book “The Politics of Rage,” Carter identifies Wallace and his play for working-class white votes as the model for the “Southern strategy” that Nixon and Ronald Reagan would use to win four landslide elections in 20 years.

Nixon wrote in his memoirs of having to navigate Wallace so he would not “draw a large number of conservative votes from me.” Nixon protected his right flank by criticizing court-ordered busing of schoolchildren to accomplish integration, vowing to impose “law and order” and declaring the “War on Drugs,” which an aide later described as a targeting of “hippies” and blacks.

Trump is the latest heir of all this, Carter said.

“When you hear Trump supporters say he ‘tells like it is’ or ‘he’s not politically correct,'” Carter said, “what they’re really saying, many of them, is … ‘I love it, because it’s what I believe, too.'”

Protesters, meanwhile, become evidence of the national decay that only the candidate’s tough leadership can reverse.

When activists interrupted his rally at Madison Square Garden in 1968, Wallace asked why Democratic and Republican leaders “kowtow to these anarchists.” He added, “We don’t have riots in Alabama. They start a riot down there, first one of ’em to pick up a brick gets a bullet in the brain, that’s all.”

Trump has pined for “the old days” when such “animals” would be “carried out on a stretcher, folks.” He orders security to “get ’em the hell outta here” and said of one protester, “I’d like to punch him in the face.”

Reed acknowledged there are “working white folks who are mad” but says Trump, like Wallace, has them “turning their arrows at the wrong folks.”

Trump denies he is playing to racism or xenophobia. His supporters “aren’t angry people,” he says, just frustrated “about the way the country is being run.”

Left: Chris Birch shows his support for presidential candidate Donald Trump before a campaign rally in Tulsa, Oklahoma in January. Not everyone believes Trump when he says he promises to "Make America Great Again." Photo by Nick Oxford/Reuters