As shutdown wears on, 5 stories from federal workers and their families

Nearly 800,000 federal employees have been furloughed or are working without pay during the fight over border wall funding between President Donald Trump and congressional Democrats.

In interviews with the PBS NewsHour, dozens of government workers and those around them expressed frustration with the shutdown and its impact on their daily lives.

Here are a few of their stories.

Lives in: Wisconsin
Occupation: Artist and author
How affected: Husband is furloughed, son is working at TSA without pay. They are depleting savings.

Geier’s son, a 28-year-old Transportation Security Administration employee in Washington state, is working without pay, and her husband, a U.S. Forest Service worker, has been furloughed during the shutdown. As a result, the family has dipped into limited savings to cover their son’s expenses, because they don’t want him to incur debt while the government remains closed.

Geier said her husband, who injured his knee on the job, also has medical bills that are not being paid during the shutdown. The family has no fallback plan at the moment. As an author and an artist, Geier said. her “income is very little and periodic.”

Lives in: New Jersey
Occupation: Adjunct professor
How affected: Husband is a furloughed government employee. They are raising a 2-year-old, recently bought a house and do not have money for next month’s bills.

Tina Gonzalez-Poole’s husband works for the Federal Aviation Administration. While he is furloughed, the couple and their two-year-old daughter have no reliable income. The shutdown comes at an especially bad time; Gonzalez-Poole and her husband recently married and bought a house. On occasion, she has filled in as an adjunct English professor, but the family’s efforts to find new work right now have come up empty.

‘We are officially out of money.’

“We were able to pay our bills this month, but that’s it,” Gonzalez-Poole said. “We are officially out of money.”

Lives in: Arlington, Virginia
Occupation: Federal employee
How affected: Furloughed worker. His child care is shut down, but he’s still paying for it.

Sam Shirazi is furloughed, and while he’s been away from work, his young daughter has been home, too. Her private daycare facility is located inside a shuttered federal agency and has closed as a result. Yet Shirazi said he’s still been saddled with the weekly bill.

The government shutdown is making life difficult for families with young children. Sam Shirazi says his daughter’s daycare is closed “because it’s located inside a federal building.” pic.twitter.com/gsvbMD0mw5

“We still have to pay the daycare bills because the daycare workers are not federal employees and so they would not get back pay,” Shirazi said. After two weeks of the shutdown, the daycare announced a 50 percent tuition discount to help parents. But that still leaves a bill for hundreds of dollars. Shirazi said his wife’s income is keeping the family going, but he has cut back on spending until he starts getting paid again. “It’s the uncertainty of not knowing when the paycheck will come,” he said.

Lives in: Tennessee
Occupation: National Park Service ranger
How affected: Furloughed worker. Has moved back in with family to save money.

A national park ranger in Tennessee, who asked not to be identified due to concerns about her job, said she has moved back in with her father to save money during the shutdown. “It’s not unpaid vacation,” she said. “It takes [a] huge emotional toll.” 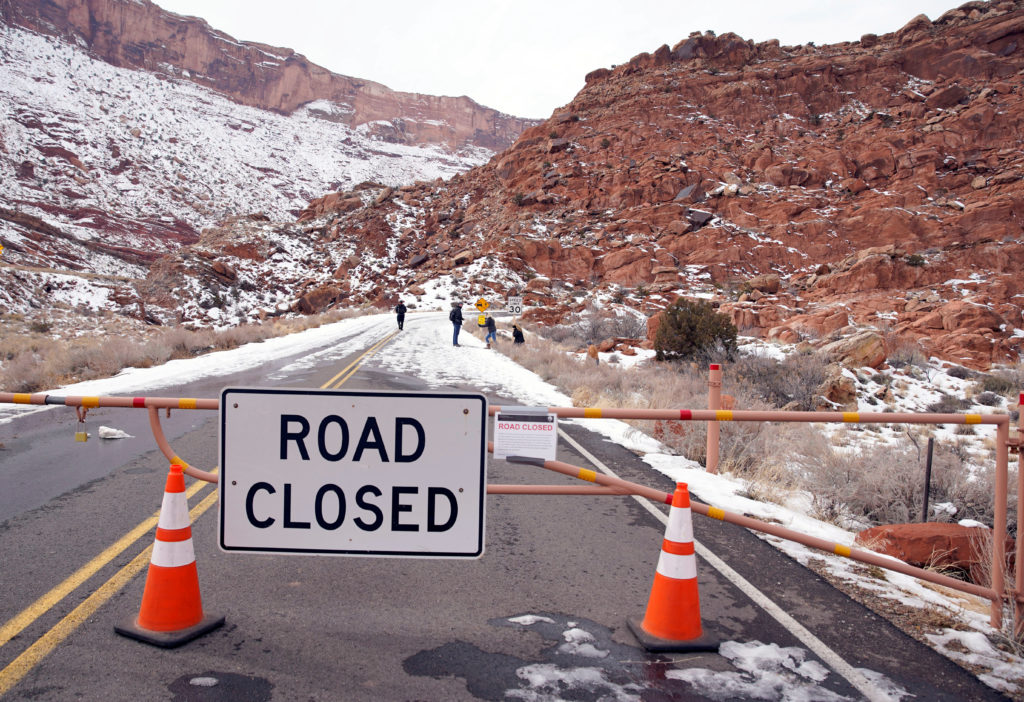 Hikers walk up the main road, which is closed because of the partial government shutdown, in Arches National Park, Utah, on January 9, 2019. REUTERS/George Frey

This worker recounted crying when she had to close the park where she works, and said she sees the shutdown as a threat to public safety in parks that have stayed open.

“It’s just dangerous for visitors to be out with no guidance,” she said, citing recent park accidents — including the deaths of at least seven people, by some counts, during the shutdown. “That becomes a huge crisis. It’s a helpless feeling.”

Lee was scheduled to start her new work on Dec. 27, but that changed with the shutdown. FEMA is still funded, but Lee said the agency employees who needed to approve her paperwork were furloughed, so she has been left in limbo, working odd jobs to help make ends meet until the shutdown ends.

“It feels like I’m a dog in a fight,” Lee said. People affected by the shutdown are “the ones tattered and bruised,” she added.

Left: A worker picks up trash on the National Mall near the U.S. Capitol building as the partial government shutdown continues in Washington, D.C. Photo by Jim Young/Reuters