At Supreme Court, voters weigh in on replacing Scalia

Republican leaders have spent the last week arguing that Justice Antonin Scalia’s Supreme Court seat should be filled after the American people elect a new president.

Today, voters had a chance to weigh in publicly as the court opened its doors for mourners to pay their respects to Scalia, who died of natural causes Saturday at 79. The response was mixed.

Greg Myers, a salesman from York, Pa., praised Senate Republicans for insisting that they would not hold hearings on President Obama’s nominee.

“I’m certain somebody of [Scalia’s] values won’t be appointed” by Obama, said Meyers, 47, who drove with his son for two hours to wait on line in the cold for a chance to see Scalia’s casket. The next Supreme Court pick “has the potential to swing the court” to the left, Meyers added.

An Obama appointee would give the court’s liberal justices a five-to-four majority, and end Justice Anthony Kennedy’s reign as the influential swing vote. 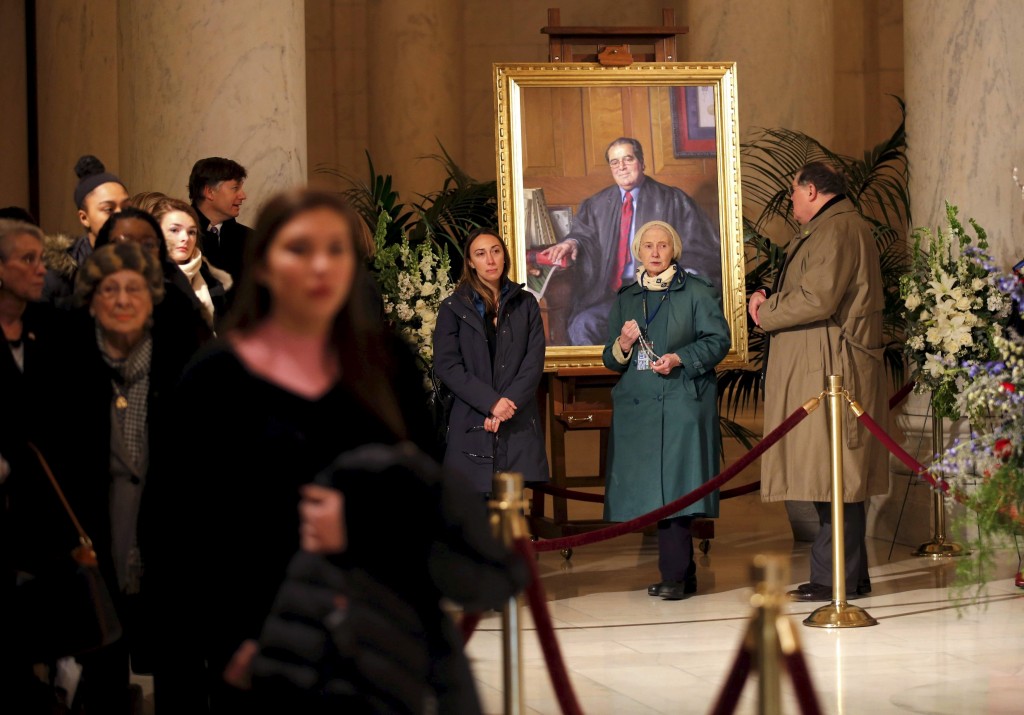 Members of the public stand next to a portrait of the late U.S. Supreme Court Justice Antonin Scalia while filing in to view his casket in the Great Hall of the Supreme Court on Friday, Feb. 19, 2016. Photo by Carlos Barria/Reuters

Though Republicans in Congress and on the campaign trail have argued that an election-year appointment would be unprecedented, six justices since 1900 have been confirmed to the court during a presidential race.

“I think at this point we’re too close to the next election,” said Bean, 53, who lives in Arlington, Va. “At this point, it’s better to wait until things settle. It’s too emotional right now.”

Bean recalled meeting Scalia when he visited her law school in the late 1990s. She said she also attended several services with Scalia at the Cathedral of Saint Thomas More in Arlington. Scalia liked to sit in the back to avoid drawing too much attention to himself, Bean said.

“He was just very nice, very gentle. There were no airs about him,” Bean said. “I wanted to honor him [today] because he’s been an excellent member of the Supreme Court.”

Other mourners said they admired Scalia, but urged the Senate to hold hearings this year on his successor, once Obama nominates a replacement.

“The president should nominate someone, and the Senate has the right to reject his nomination,” said Teddy McCullough, 22. “I’m not sure if it’s the best idea politically for Republicans to just not take up the nomination.”

McCullough, who lives in Washington, D.C. and works for a non-profit, said he didn’t agree with all of Scalia’s decisions, but admired the justice’s independence. McCullough pointed to Texas v. Johnson, a 1989 decision that struck down a ban on flag burning.

Scalia joined the majority opinion, angering conservative critics who had hoped for a different outcome. Since then, however, the case has been frequently cited as an example of Scalia’s fair mindedness on the bench.

Kadesh Dubose, 22, a self-described liberal, said he disagreed with most of Scalia’s opinions, but still felt drawn to the court to witness a moment in history.

Dubose said he is hoping that Obama can appoint a third Supreme Court justice before leaving office early next year.

“I think the Senate should give whoever Obama nominates a fair shot,” Dubose said. “To say that you’re not even going to consider anybody? That’s not how our democracy works.”