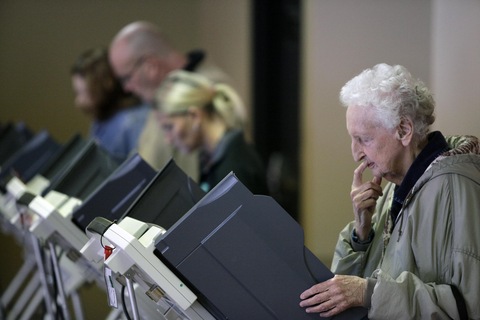 Voters in Ohio cast their ballots. The battleground state is being watched closely as a potential key to winning the White House. Photo by J.D. Pooley/Getty Images.

For the last month, the NewsHour worked with public media partners around the country, intensifying our focus on the areas and issues that could determine the election in a series called “Battleground Dispatches.”

As we wait for the final polls to close and watch for the winners to be called, here is a round-up of the stories we brought you to help put in perspective how the choices made in the voting booths may alter the future of the nation.

Our first report came from Todd Zwillich of Public Radio International who traveled to Florida where the issue of Medicare and the budget proposed by Republican vice-presidential candidate Rep. Paul Ryan is front and center in two competitive House races. He also traveled to New York where Medicare was a big issue for voters deciding a congressional race both parties are eying to decipher national trends.

History could be made Tuesday in New Hampshire if the Democratic women running for congress and governor claim victory. It would be the first time a state would have women in all the top elected offices (currently both of the state’s senators — one a Republican, the other a Democrat — are both women not up for reelection). Anna Sale of WNYC traveled to the Granite State to highlight how these candidates and issues of concern to female voters are impacting the campaigns. We also brought you a slice of life from a diner famous for serving politicians and offering political discussions in a region known for its independence and unpredictable voters.

Are you familiar with the term “sequestration”? That big word means big cuts in federal spending if a budget compromise is not reached in the lame-duck session of Congress to offset the automatic draw-down in spending slated for January as a result of the debt ceiling deal last summer. Cathy Lewis from WHRO reported from Hampton Roads, Va., the largest military installation in the country, where sequestration would mean the loss of lots of jobs. Six percent of the population there wears a military uniform. And another 40 percent work in businesses that support them. We also looked at how possible cuts in defense would ripple across this crucial swing state and severely hamper Virginia’s economy.

Ohio. Ohio. Ohio. If there is a first among equals for battleground states this campaign season, the Buckeye state would likely get the nod. Both campaigns have practically camped out there with visits from the candidates almost daily. Todd Zwillich hit the road for us again to report from the Youngstown region where the auto bailout and the potential of a boom in energy production have reversed the economic free-all the area suffered for decades. We also spoke with Karen Kasler of Ohio Public Radio about the contentious Senate race in the state.

We heard there are no safe bets in Nevada from Mitch Fox of Vegas PBS. His story looked at the intense fight for a newly created House seat where the complexities of the race read like a novel. There’s big money, aggressive attacks, a famous family name, even a potential bankruptcy looming. And it’s all playing out in a district that covers half the state.

Paul Yeager of Iowa Public Television brought us the most recent story on how immigration is a big deal for voters, even if it’s not talked about much by the campaigns. Despite numerous appearances by President Obama and Mitt Romney, the issue is almost never mentioned in this key battleground state. It’s surprising, because although Latinos make up only 5 percent of Iowa’s population, their numbers have increased by 110 percent over the last 10 years. Perhaps nowhere is that growth more evident than Perry, where we also offered a profile of that changing town.

Tune in to the NewsHour’s Election Night Special where we will be interviewing public media reporters in these key areas throughout the night.