SAN ANTONIO — Beto O’Rourke’s improbable U.S. Senate campaign has challenged expectations of what was thought possible by a Democrat in Texas. But with just weeks before Election Day doubts remain over whether he can pull off another crucial feat: getting a surge of Latinos to the polls.

Republican Sen. Ted Cruz is aiming to survive one of the most expensive Senate races of 2018 by rallying his base of white conservatives.

His campaign has made no conspicuous courtship of Latino voters, including no Spanish-language television ads or a Spanish version of his campaign website. And, save for a dramatic about-face this summer on the Trump administration’s “zero tolerance” immigration policies of separating children from parents, Cruz has maintained a tough line on immigration.

O’Rourke’s path to an upset, meanwhile, partly hinges on bringing out Hispanics who typically don’t show up to the polls, especially in a midterm election.

Texas ranks near the bottom in voter turnout, and while the state’s booming Hispanic population is on pace to outnumber whites as early as 2022, voters with Spanish surnames accounted for fewer than 1 in 5 votes in 2016.

Uptick in Latino turnout has been steady but modest, and in the last midterms, exit polls showed that about 44 percent of Hispanic voters went for Republican Gov. Greg Abbott. 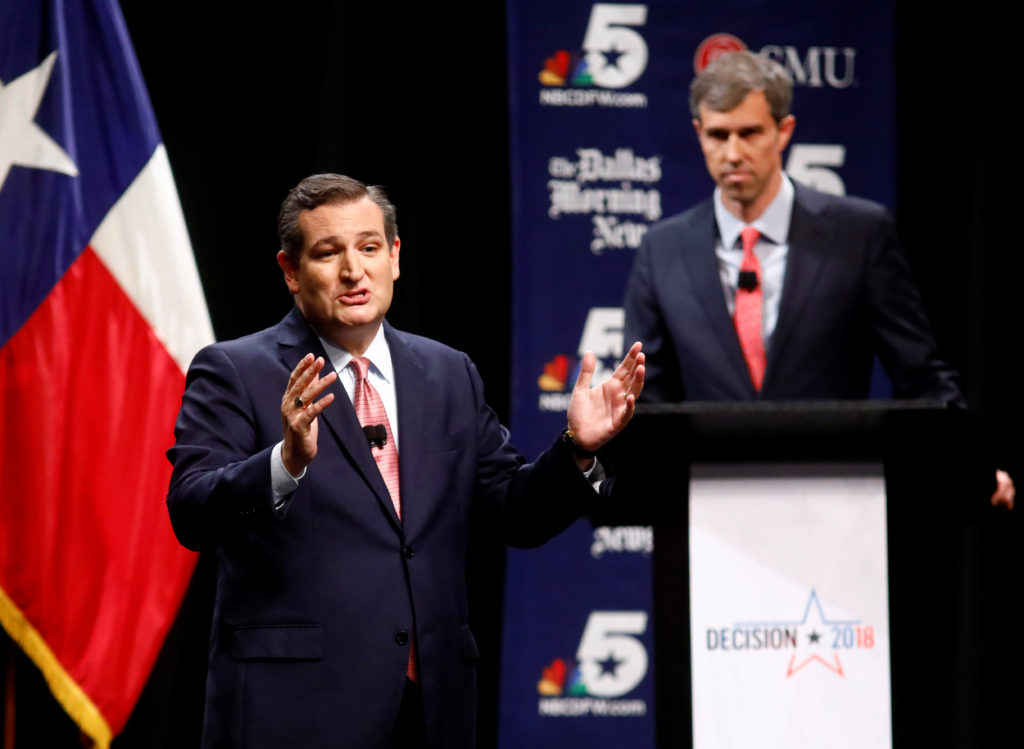 On Thursday, a new poll from Quinnipiac University put Cruz up by 9 points and getting about 4 in 10 Hispanic voters. Other polls have shown a tighter race, but in any case, O’Rourke must pull in a broader electorate than his rival to become the first Texas Democrat elected to the U.S. Senate in 30 years.

“Donald Trump won. We’re discouraged. A lot of people are discouraged,” said Orlando Valdez, 19, a student at the University of Texas at San Antonio, where the majority of people on the 30,000-student campus are Hispanic. He lined up too late to make it inside a packed auditorium to see O’Rourke, who railed against building a wall on the U.S.-Mexico border and condemned efforts to deport so-called “Dreamers.”

“That shows us, as a community, that it’s really hard for us to come back out because Donald Trump won.” But he believes O’Rourke is making inroads.

San Antonio is a home field for Democrats. But even here, there is fresh anxiety. Last month, a Hispanic Republican stunned Democrats by winning a special election for a state Senate seat in a district that Hillary Clinton carried by 12 points. It was a blow for Democrats in the hometown of Julian Castro, the city’s former mayor who has not ruled out a presidential run in 2020.

O’Rourke was served a reality check after finishing second in Texas’ March primaries to a little-known and barely funded Hispanic challenger in more than 20 counties along and near the border with Mexico. It was a reminder of how many voters still didn’t know O’Rourke, whose district is on the Texas border and is bilingual.

Cruz is Texas’ first Hispanic senator and his father’s story of emigrating from Cuba is a bedrock of his campaign. He says plenty of Latinos are already with him.

Hispanics are the nation’s second-fastest growing demographic in the U.S. behind Asians, and GOP strategists have braced for turmoil on the border having a fallout on the midterm elections. When more than 1,000 Latinos gathered in Phoenix in June for the annual conference of the National Association of Latino Elected Officials, the Trump administration sent no representative, the first time in at least 24 years that an administration skipped the event.

“Until everyone has been reflected in this campaign, then we have not done our job.”

Of the roughly 400,000 newly registered voters in Texas since the March primaries, slightly more than 1 in 4 have Hispanic surnames, according to Texas elections officials.

“Any increase in turnout is going to pay a huge dividend for Beto. With the white vote, you’re losing the white vote,” said Matt Barreto, the co-founder of Latino Decisions. “Their best opportunity is to increase turnout in the black and Latino community.”

Asked about Hispanic outreach in San Antonio, O’Rourke said there was still work to do.

Left: A woman holds up a sign supporting Beto O'Rourke at an event in Eagle Pass, Texas. Photo by Sergio Flores/Reuters

How Trump and trade factor into Heitkamp’s reelection battle