Former Vice President Joe Biden is holding onto his lead over President Donald Trump with less than two months until the November election, according to the latest PBS NewsHour/NPR/Marist poll. But Trump retains some important advantages, like more Americans believing he is the better candidate to lead the economy, which ranked as their top voting priority.

In a head-to-head match-up between the two major party candidates, Biden holds a double-digit lead over Trump, with 52 percent of registered voters supporting the Democratic candidate and 42 percent backing the Republican incumbent. When matched against third-party candidates, both Biden and Trump lose some registered voters, but Biden remains ahead at 49 percent over Trump’s 41 percent. Five percent of voters would pick Libertarian candidate Jo Jorgensen if given the option, and 2 percent would pick Green Party candidate Howie Hawkins, who is on the ballot in some states. In poll after poll since February, Biden leads Trump among registered voters, according to PBS NewsHour/NPR/Marist data.

“There’s no question that Biden’s ahead at this point,” said Barbara Carvalho, who directs the Marist Poll. 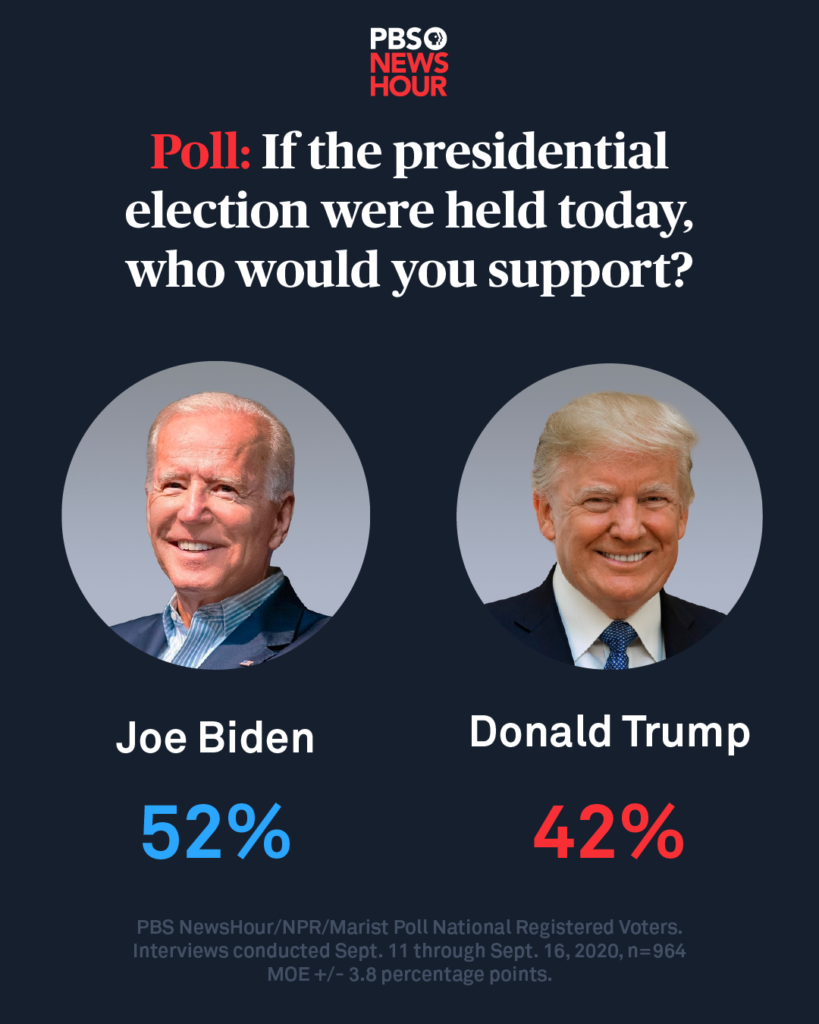 But Trump still enjoys greater enthusiasm than his Democratic opponent — 79 percent of those who say they plan to vote for him are doing so because they support him, while 17 percent say it’s because they are against Biden. People who plan to vote for Biden are more evenly split in their reasoning, with 49 percent explicitly supporting him and 46 percent motivated more by voting against Trump.

“There’s no question that Biden’s ahead at this point.”

With Trump’s overall disapproval rating hovering at 53 percent — it hasn’t dropped below 50 percent since June 2019 — U.S. adults said Biden would do a better job as president on some of the issues most important to them, including COVID-19, where Biden has a 13-point lead on the president, and race relations, where Biden has a 21-point lead Asked what single issue matters most to them, 13 percent said the coronavirus, 11 percent said climate change (the most important issue among Democrats), while health care and race relations tied at 8 percent.

The greatest number, 20 percent, named the economy as their top issue, which was also the most important issue to Republicans. Facing a historic recession, half of Americans see Trump as a more effective leader on that issue, while another 43 percent favor Biden. That opinion gap has widened for Trump since August, when 47 percent of Americans thought he would better handle the economy. That support comes despite the economy faltering and the nation falling into the worst recession in decades under Trump’s leadership. For much of his presidency, Trump has portrayed himself as a leader who can produce a healthy economy, pointing to low unemployment numbers and record-high stock indexes, while also engaging in trade wars with China and other nations that have negatively impacted farm incomes, manufacturers and more.

Americans are split on who they think would do a better job leading on crime, with Biden showing a slight edge. That’s despite Trump’s aggressive strategy to position himself as the law and order candidate amid national demonstrations on racial justice and police brutality against Black Americans. 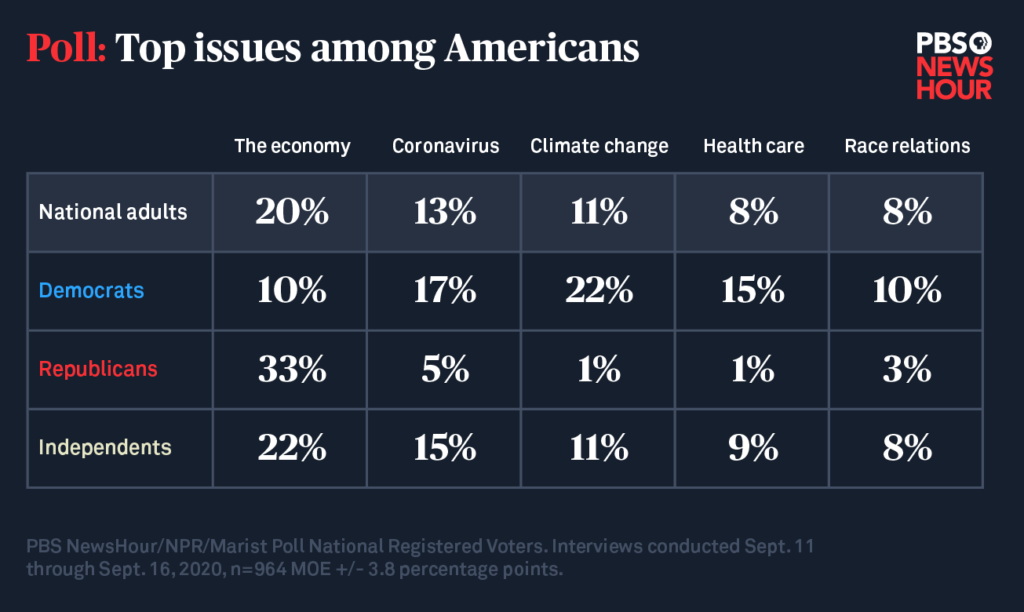 Coming out of 2019, things were looking up for Trump, political historian Allan Lichtman said, with a strong economy as the crown jewel for his reelection campaign.

“Everything changed in America in 2020,” Lichtman said. With a pandemic, a wounded economy that could plague the country for years and social and racial unrest, Lichtman, who has accurately forecasted the results of every presidential election since 1984, including Trump’s win in 2016, said his measures suggest Trump will lose this election.

After multiple investigations into the Trump administration’s ties to Russian election interference, and Trump himself suggesting he may question the integrity of the 2020 election, Americans’ belief that the country is ready to hold the next presidential election has remained resilient at 53 percent since January. Another 41 percent of U.S. adults say the country is not as prepared as it should be. That faith grows when people are thinking about their own state and local election boards: 69 percent of Americans feel very confident that the 2020 elections will be conducted fairly and accurately.

But the pandemic has thrown more confusion into the process, with fears about contracting the coronavirus at crowded polling stations driving many Americans to seek alternatives to voting in person on Election Day, such as voting by mail. Fifty-two percent of Americans say they feel confident that the U.S. Postal Service will deliver election-related mail to voters and election officials on time this year, despite turmoil over reported mail delays and Trump’s own efforts to discredit the method. 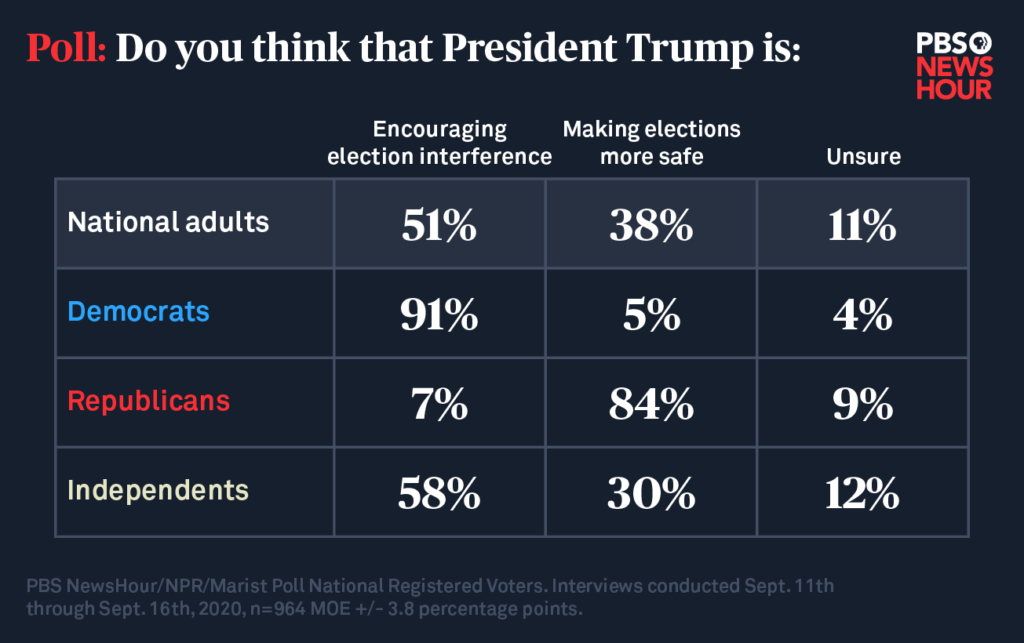 Registered voters are still more likely to vote in person on Election Day than by alternative means, with 46 percent saying they plan to do so, including 62 percent of Republicans and 45 percent of independents. Another 35 percent of voters plan to vote by mail or absentee ballot, an option preferred by half of all Democrats. An additional 14 percent of voters said they will go to an early voting location.

Earlier this month, Trump encouraged North Carolina voters to attempt to vote multiple times, both by mail and in person to ensure their votes were counted. As the North Carolina State Board of Elections said in a released statement, voting twice in an election is a criminal offense. On Thursday, Trump tweeted, without evidence, sentiments that have become a common refrain for the president: “Unsolicited Ballots are uncontrollable, totally open to ELECTION INTERFERENCE by foreign countries, and will lead to massive chaos and confusion!”

Twitter flagged Trump’s tweet with data and resources that show “voting by mail is legal and safe.”

Virtually no historical precedent exists for Trump’s calls for voter fraud in North Carolina, or his overall campaign to sow doubt about the 2020 election, said Jeffrey Engel, who directs the Center for Presidential History at Southern Methodist University in Dallas. The closest the nation has come was when Southern states refused to include Abraham Lincoln’s name on the 1860 presidential ballot, he said.

Trump’s behavior “crosses an invisible but critical red line of delegitimizing the outcomes of the election,” Engel said. “Presidents haven’t done that.”

Going into the final stretch of his reelection bid, Trump has tried to stir optimism about the outlook for the coronavirus pandemic, even when top infectious disease experts, including Dr. Anthony Fauci, paint a different picture. On Wednesday, Trump claimed that Centers for Disease Control and Prevention Director Robert Redfield was “confused” after Redfield testified to a Senate committee that any coronavirus vaccine was unlikely to be widely available for most Americans until spring or summer 2021. Redfield did not retract his statement.

A new book from journalist Bob Woodward revealed last week that Trump has said he knowingly played down the severity of the virus back in February. Meanwhile, the U.S. is approaching 200,000 deaths tied to the virus, while life for many remains disrupted by jobs lost, income gone and food and housing uncertain in many parts of the country.

Erosion of trust could be influencing the public’s willingness to be vaccinated against COVID-19.

“I really do believe we’re rounding the corner,” Trump told reporters gathered on Sept. 10 at the White House.

Most Americans don’t share Trump’s optimism. More than two-thirds of U.S. adults — 69 percent — said that they think it’s going to be at least six months before daily life gets back to normal. That includes 86 percent of Democrats, 73 percent of independents and 48 percent of Republicans.

Mixed messages from the Trump administration and leading public health officials have made it difficult for Americans to know who to trust for information about the pandemic. Trump’s word garnered the least amount of confidence, with only a third of Americans saying they trust what he has to say about the virus. Confidence has also slipped substantially when it comes to the news media, state and local government officials, and even public health experts. The last group still conjures the greatest amount of trust, among 69 percent of Americans, but that’s down from 84 percent in March. 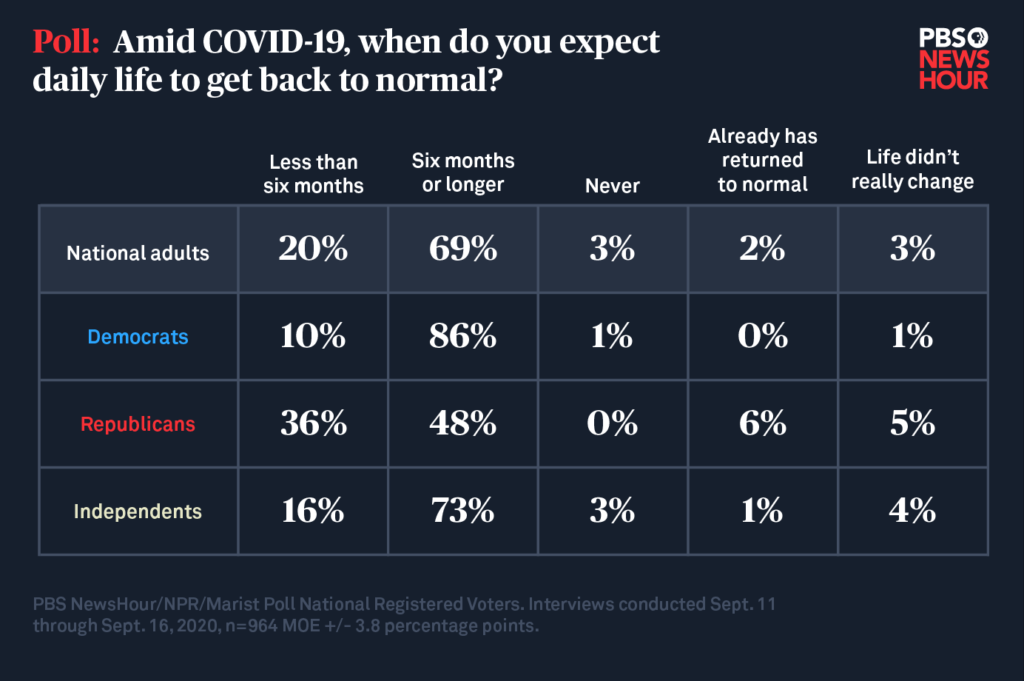 Erosion of trust could be influencing the public’s willingness to be vaccinated against COVID-19. The number who said they would get the vaccine has dropped from 60 percent of Americans in August to 49 percent today, with 61 percent of Democrats and 40 percent of Republicans prepared to roll up a sleeve.

Misinformation and anti-vaccination talking points that cast doubt on the entire scientific method have been applied to this virus, said Dr. Angela Rasmussen, a virologist who studies infection and immunity at Columbia University’s Mailman School of Public Health. That misinformation has compromised many people’s understanding that science is credible, she said, so people are losing faith in fundamental elements of public health.

“People don’t know what to think,” Rasmussen said. “They don’t know if it’s going to be reliable or not. It’s going to make a lot of people who normally do get vaccinated skeptical of the process.”