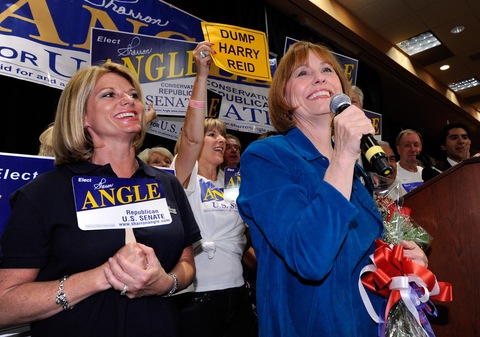 It appears former Assemblywoman Sharron Angle is poised to be the big jackpot winner of the money race for third quarter donations. The tea party backed Republican candidate for Senate in Nevada announced Tuesday that she took in a whopping $14 million from July 1 through Sept. 30. Only Scott Brown was able to post a better cash haul this year when he brought in $14.2 million in January during his cycle defining victory over Martha Coakley to replace the late Sen. Ted Kennedy in the United States Senate.

The eye-popping fundraising total from the Angle camp will likely provide her with enough cash to remain competitive with Senate Majority Leader Harry Reid, D-Nev., through the final three weeks of the campaign.

Sen. Reid has been the top target for Republicans this election year. He is locked in an extraordinarily close battle with Angle. Reid has not yet released his third quarter fundraising totals, which are due to be filed with the Federal Election Commission on Friday. As of June 30, 2010, Reid had raised $19 million for his campaign since his election cycle began in 2005. That’s just $5 million more than Angle raised in the last three months.

However, the most important number is the cash on hand that remains in the bank for each candidate and the Angle campaign has not released those figures. At the close of the second quarter, Reid had $8.9 million cash on hand compared to Angle’s $1.8 million.

To be sure, Angle likely spent a lot of money on direct mail fundraising appeals to bring in that $14 million. But as John Thune (against then Senate Democratic Leader Tom Daschle) and Rick Lazio (against then First Lady Hillary Clinton) learned before her, when you are being set up as the potential dragon slayer for your entire party, the cash begins to roll in from all corners of the country.

“Sharron Angle produced one of the most successful single quarters of fundraising in the nation’s history for a U.S. Senate campaign. This is a testament to the hatred of Harry Reid, the nation’s disapproval of President Obama, and the unprecedented grassroots support for Sharron Angle. Harry Reid is losing this race, he knows it, and he is just going to get more desperate over the final three weeks,” said Angle communications director Jarrod Agen.

The Reid campaign notes that without knowing how much Angle spent and how much cash remains in the bank it is unclear just how successful this quarter will prove to be for her.

The two candidates are set to meet on Thursday night in Las Vegas for their one and only televised debate. Early voting begins on Saturday.