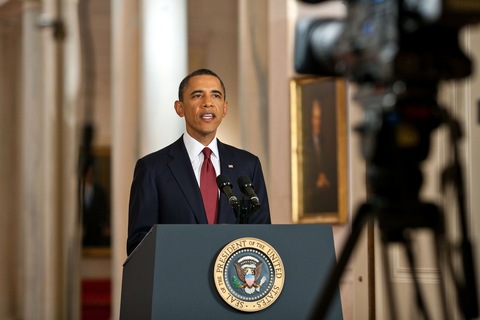 There are, of course, huge military, intelligence and national security implications caused by the death of Osama bin Laden, but political reverberations are also at play.

The Pew Research Center for People & The Press joined forces with The Washington Post to take a one-day instant reaction survey for a quick gauge on how the American people are reacting to the news.

Barack Obama’s job approval rating has jumped in the wake of bin Laden’s killing. In the one-day survey, 56% say they approve of the way Obama is handling his job as president while 38% disapprove. Last month, Obama’s job rating was about evenly divided – 47% approved, 45% disapproved. Obama has gotten about the same boost in job approval as did former President Bush in the days after the U.S. military’s capture of Saddam Hussein in December 2003. Following Saddam’s capture, Bush’s rating rose from 50% to 57%.

As we wrote earlier Tuesday in The Morning Line, President Obama and his team are clearly aware of the potential political upside of bin Laden’s demise.

Perhaps the most welcome news in the instant poll, and likely the most fleeting, is the positive turn in the country’s mood.

The survey also delivers a healthy dose of political reality to the Obama White House. No matter how good this victory lap might feel and no matter how high it boosts the president’s overall approval ratings, the economy is very likely to remain the main focus of the American electorate. And on that score, there appears to be no spillover effect from the killing of bin Laden.

Only 40 percent of Americans polled last night approve of President Obama’s handling of the economy compared to 55 percent who disapprove. That is largely unchanged from April.