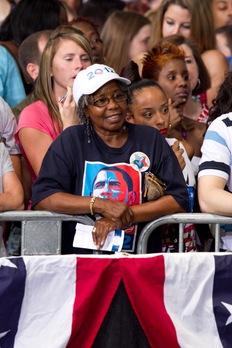 A new poll that shows minorities’ continued optimism about their economic future comes at a time when President Obama is promoting his economic message. Photo by Jessica McGowan/Getty Images

WASHINGTON — Americans’ attitudes about their economic future are sharply divided by race, with whites significantly less likely than blacks or Hispanics to think they can improve their own standard of living. Indeed, optimism among minorities now outpaces that of whites by the widest margin since at least 1987, a new analysis shows.

The Associated Press-NORC Center for Public Affairs Research analysis shows that after years of economic attitudes among whites, blacks and Hispanics following similar patterns, whites’ confidence in their economic future has plummeted in the last decade. Blacks and Hispanics, meanwhile, have sustained high levels of optimism despite being hit hard in the recent recession.

The findings come as President Barack Obama seeks to promote a broader message of economic opportunity amid a rising gap between rich and poor. The AP reported this week that 4 out of 5 U.S. adults have struggled with joblessness, near poverty or reliance on welfare for at least part of their lives, with white pessimism about their economic future at a 25-year high. More than 40 percent of the poor are white.

The AP-NORC analysis of data from the General Social Survey, a long-running biannual survey conducted by NORC at the University of Chicago, found just 46 percent of whites say their family has a good chance of improving their living standard given the way things are in America, the lowest level in surveys conducted since 1987. In contrast, 71 percent of blacks and 73 percent of Hispanics express optimism of an improved life – the biggest gap with whites since the survey began asking.

Blacks and Hispanics diverged sharply from whites on this question following Obama’s election as the nation’s first black president in 2008. Economic optimism among non-whites rose, while whites’ optimism declined.

Blacks’ hopefulness isn’t limited to the future; they also express a positive outlook on their current financial standing.

“In the minority community, as perceptions of discrimination lessen a bit with the election of an African-American president, people see a greater ability to succeed,” said Mark Mellman, a veteran Democratic consultant who closely tracks voter sentiment. “Many working-class whites, on the other hand, see dwindling opportunities as manufacturing and other jobs that once enabled them to get ahead just aren’t available.”

The hopeful include John Harris III, 23, of Washington, D.C., a recent graduate of historically black Howard University who now works to reduce homelessness through the AmeriCorps program. Part of the first generation of college students who saw Obama get elected, Harris says he and many fellow black graduates in their 20s and 30s are now motivated to excel and help people of all races who are in need.

“It has something to do with the way that African-Americans as a whole think in our country,” said Harris, describing the newfound sense of optimism amid an increasing number of people who serve as black role models. “We feel more independent. We feel like we’re worth more, because we see it every day on the TV, hear it on the radio and are beginning to see it more in our communities.”

Still, there are limits, he said. “I am hopeful that the economy will improve, but it won’t be because of politicians,” Harris said, noting the recent gridlock in Washington that has curtailed Obama’s agenda. But the racial differences in optimism aren’t strictly a partisan divide – they remain even when accounting for partisanship and other demographic and socioeconomic factors.

The AP-NORC analysis also finds that, based on a separate measure of optimism – one that tracked the percentage of people who believe the country is moving in the right direction – blacks’ optimism since Obama’s election was on average 39 percentage points higher than whites’ assessment of the country’s direction. That represents a reversal from earlier in the decade, when white optimism exceeded that of blacks by an average 18 percentage points.

Hispanic optimism about the country’s direction also surpassed that of whites after 2008.

The increases in minority optimism come despite any real improvement for blacks and Hispanics relative to whites based on economic measures of unemployment, median income and median net worth. For instance, since 2005, whites as a group lost 15 percent of their net worth, compared with 43 percent for blacks.

William Julius Wilson, a Harvard professor who specializes in race and poverty, noted that in the last decade the impact of the weak economy has tended to affect lower-skilled whites and minorities more equally. But he says while blacks have the “powerful symbolic effect” of Obama’s election, non-college whites have no such “positive subjective feelings to offset or blunt their frustrations.”

The economically anxious include Eugene Lester, a 12-year mining employee in the white working-class community of Buchanan County, Va. While jobs were plentiful in the 1970s and 1980s, federal policy has since made it harder for coal-producing areas like Buchanan to stay afloat, he said. The county has a poverty rate of 24 percent.

“It’s scary as hell; I’m afraid every day to go out to work and not have a job,” said Lester, 35, a father of two young children. “I remember when I was growing up, my dad, he could quit a job this morning and be working on another by 12:00.”

But now, “the economy around here, if something doesn’t happen soon, the economy’s over.”