Editor’s Note: Nearly 25 million Latinos are eligible to vote in the upcoming midterm elections, making them an increasingly courted voter bloc for both Democrats and Republicans. According to the Pew Research Center, Latinos could have an especially strong impact on races in Colorado. But even in the most contentious races there, candidates are largely staying silent on immigration reform, a motivating political issue to many Latinos, says Katie Kuntz of Rocky Mountain PBS I-News

Latinos account for about 20 percent of Colorado’s population and about 14 percent of its voters. The group presents a major player in the state’s most contentious elections.

But while Republicans and Democrats alike are working hard to attract these voters, neither party is pushing the issue that is highly important to many of them: immigration reform.

“Do you hear anyone talking about immigration reform anymore?” asked Floyd Ciruli, Denver pollster and political analyst. “They are targeting things talking directly to Hispanic voters, but there is too much downside on both sides to bring it into the general conversation.”

For Republicans, reaching out to Latino voters has become more prominent in Colorado than before. Unlike election years past, there’s not a lot of railing for or against immigration reform, much less talk of stronger deportation policies.

“I wouldn’t say immigration is taking a back seat, but you can’t paint the picture that it’s the only issue for the Hispanic community,” said Ali Prado, the Hispanic press secretary for the Republican National Party. “It’s an important issue, but the number one issue is the economy, and then education.”

But Latino voters and advocates question that stance.

“I think there is maybe a disconnect because, yes, the economy and education are big issues, but immigration is something we talk to voters about every single day,” said Carla Castedo, Colorado director of Mi Familia Vota, a national, non-partisan get-out-the-vote organization. “Most Latino voters are impacted personally by immigration, whether they personally are immigrants or it’s a family member or a friend.” 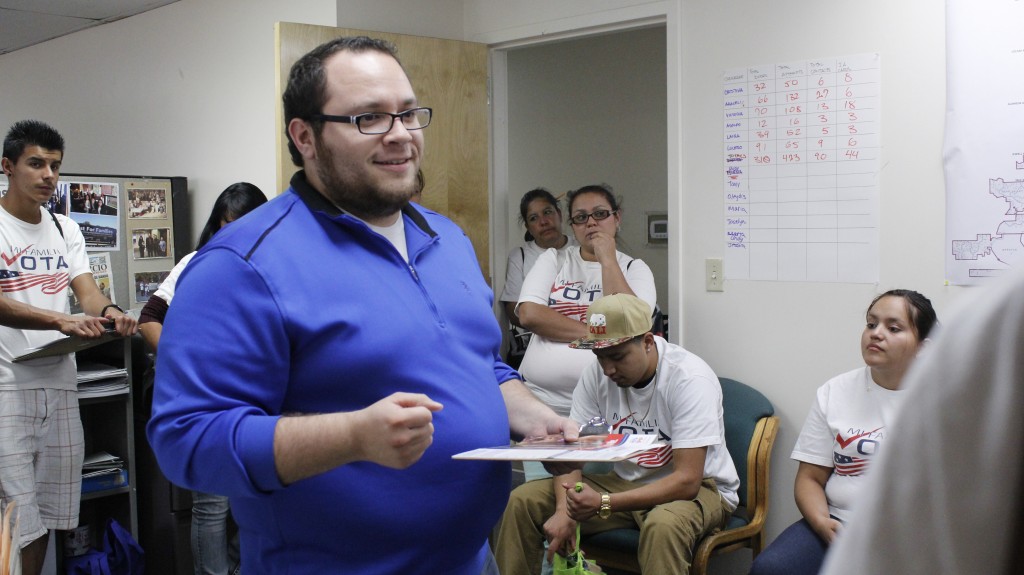 In fact, 53 percent of Colorado’s eligible Latino voters are personally acquainted with an undocumented immigrant, according to a poll released Oct. 15 by Latino Decisions.

But even though immigration significantly impacts Colorado voters, the outreach approach for Democrats is much the same as Republicans — and it doesn’t seem to be working very well.

“We won’t be ignored by one side and be taken for granted by the other side,” Castedo said. “The fact that immigration reform wasn’t passed really meant a lot, and right now people don’t know where to direct their anger.”

“The lack of action from the president has deflated the hopes of immigration advocates,” said Matt Barreto, co-founder of Latino Decisions.

In early September, President Obama announced that he would delay any executive action to overhaul the immigration system — backing off a promise he made in June, infuriating immigration supporters and potentially meaning backlash for Democrats.

“I think the implication is that the issue is still controversial, there is no clear winner,” Ciruli said. Even issues related to immigration on the state level, like the non-citizen driver’s license program, remains controversial for both gubernatorial candidates. Gov. John Hickenlooper signed the law, but it has been underfunded and difficult to access, critics have charged.

The Republican challenger, Bob Beauprez, has stated that he would repeal the law, an outcome unlikely to appeal to Hispanic voters.

Still, Democrats seem to lean on the fact that in 2012, four out of every five Hispanic voters in Colorado voted for the president.

But presidential elections do not easily predict midterm outcomes.

First, voting drops off in midterm elections. And, according to a recent Rocky Mountain PBS I-News analysis of Census data, Latino voting is more likely to decrease than any other statistically significant group during midterm elections. 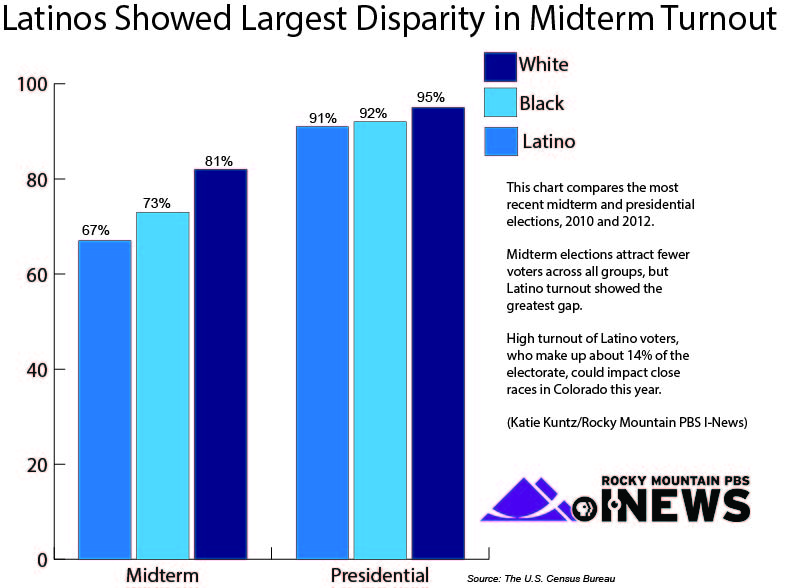 Comparison of voter turnout among Latinos, whites and blacks in Colorado in 2010 midterm and 2012 presidential election years. Photo by Katie A. Kuntz/Rocky Mountain PBS I-News

“I don’t think that there is any sign that they are highly motivated this time,” Ciruli said. “The reason they tend to drop off is because well, first, everyone does — everyone votes more in Presidential elections — but Latinos are newer to the community and they are less likely to get into the polling place.”

Even so, Latinos represent a growing constituency in the state that both parties want to attract.

Right now, Republicans and Democrats report engaging Latinos through direct mail, door-to-door canvassing, events in Spanish-speaking neighborhoods, hiring Hispanic advocates, and some candidates are even trying out the language themselves.

Colorado’s 6th Congressional District, for example, includes some of the highest concentrations of Latino voters relative to the rest of the state, and it has a tight race between Republican Representative Mike Coffman and Democratic challenger Andrew Romanoff. Both candidates find it crucial to appeal to Hispanic voters.

“Mike Coffman went out to learn Spanish, and that is something that really resonates with voters,” said GOP press secretary Prado.

Romanoff also speaks Spanish, and he criticizes Coffman’s stance on immigration issues. He is also concerned that the state’s other Democrats are not taking as active an approach on immigration policy.

“I think my campaign is working harder than anybody in the state,” Romanoff said. “We are very intent, not just on winning this race, but really on solving the problems that Congress has neglected, and immigration reform is one of the best examples of that.”

Left: Luis Valenzuela, left, Carla Castedo, center, and Ricardo Martinez, right, prepare for an evening of canvassing in heavily-Latino neighborhoods on Wednesday, Oct. 15. These workers will provide information to voters about their polling places and voting deadlines in an effort in increase voter turnout. Photo by Katie A. Kuntz/Rocky Mountain PBS I-News