By the numbers: Comparing Obama’s State of the Union priorities to those of Bush, Clinton

Presidents all have different priorities, but comparing keywords used by the past three presidents during their State of the Union addresses reveals starkly varying emphasis, leadership and style.

President Bill Clinton, during a time of peace and economic boom, focused his remarks on a traditional Democratic, up-from-the-bootstraps, help-the-neediest in society, Franklin Delano Roosevelt-style message.

Prominent in the word cloud of his combined seven State of the Union addresses and one joint address to Congress are words like “people,” “children,” “new,” “work,” and “help”: 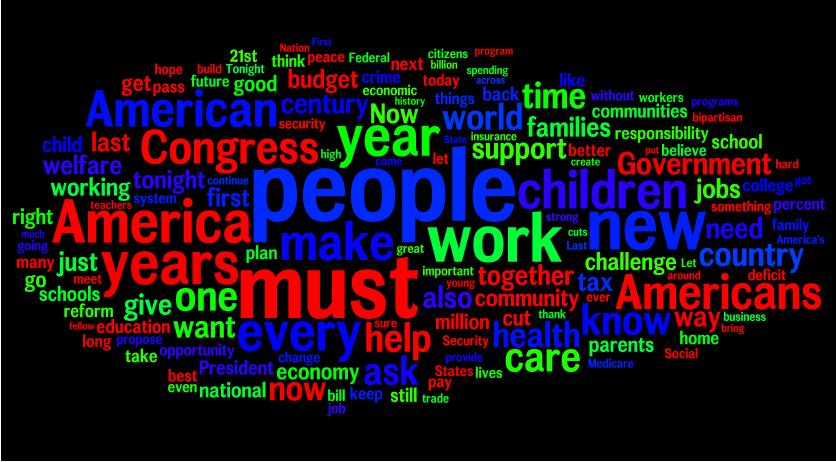 President George W. Bush, who followed Clinton, was a president at war. He was deeply affect by the terror attacks of 9/11, and his reaction and military response to that day would largely define his legacy.

Words like “must,” “freedom,” “security,” “weapons,” “Iraq,” and “terror/terrorists” can all easily be spotted: 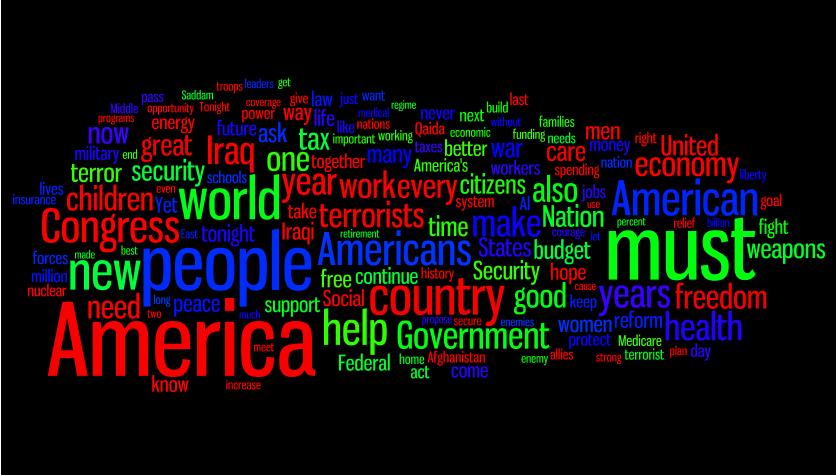 Compare that to President Barack Obama, who followed Bush and largely ran as the anti-Bush. Instead of war abroad, the most pressing issue for Obama was the economic imbroglio at home, The Great Recession. That’s why “jobs” pops out in his word cloud below.

“Terror” doesn’t factor in at all. Instead it’s words like “people,” “economy,” “jobs,” “work” and “years.” That really captures that the struggling economy and jobs were top of mind for most Americans after the 2008 financial collapse, as well as Obama’s calls for patience: 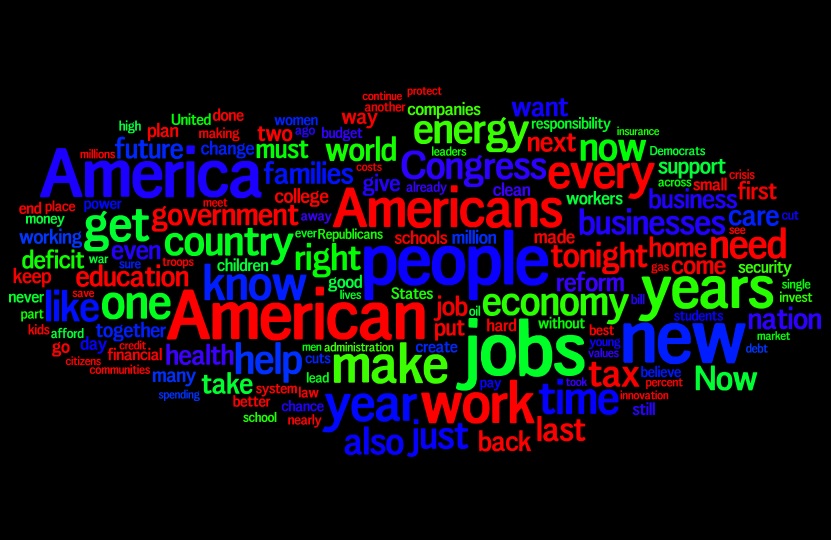 Adding it up, the priorities are clear. Even though President Obama has delivered two fewer of these types of addresses than Bush or Clinton, he leads them in word count in some areas, notably on mentions of jobs, businesses, energy, climate, the middle class (George W. Bush did not utter the words “middle class” once in a State of the Union address) and immigration/citizenship.

On “jobs,” President Obama has mentioned the word 207 times, 69 more than Clinton, and 139 more times than Bush. On “energy,” he nearly doubled Bush and said it five times more than Clinton.

Bush’s focus was clear — he used versions of terror and terrorism or terrorist 171 times. Remarkably, Clinton used it six times more than Obama despite the continued worldwide efforts to combat terrorism under Obama following Bush.

Bush also used the State of the Union as a way to rally support for the military action in Iraq. That helps explain why he said the country’s name 164 times. The second-most mentioned country for Bush was Afghanistan at 34.

Obama has mentioned Iraq just 19 times, the same amount as Afghanistan, where he ramped up after Bush left and then drew down last year. Clinton mentioned Iraq seven times and never uttered the word Afghanistan or al-Qaida for that matter. Bush mentioned the terror organization 38 times, Obama said it 16 times.

Bush was also a big user of the word “freedom.” He mentioned it 86 times, 10 times as often as President Obama and more than double Clinton.

Clinton, on the other hand, was focused on issues like children (298 mentions), education and school (210), and “help” (180), far more than either Bush or Obama. By the way, showing how times have changed, Clinton also mentioned welfare a whopping 89 times. Bush said it just four times. Obama — not once.

*These counts are for the entirety of each president’s terms — eight State of the Union addresses/first joint address to Congress for both Bush and Clinton and six for Obama. Obama still has two more addresses to make and will add to this chart.

Left: Presidents Bill Clinton (pictured in 2000), George W. Bush (2008) and Barack Obama (2013) all had different styles when it came to the State of the Union address. Photos by Reuters