A British photojournalist asked people around D.C. to sum up their feelings about President Trump with one gesture

Never in my much-travelled life have I boarded a large commercial airliner where the cabin crew outnumbered the fare-paying passengers. To me this encapsulated heaven on Earth for the often poverty-stricken freelance journalist!

To have a choice were I could stretch out over three seats and sleep, as if I was in that fabled—but never quite realized—business class, Valhalla indeed.

I shall call her ‘Tina’— a diminutive sparkly-eyed United Airlines hostess and an uncanny doppelganger for Olivia Newton John with a genuine friendly smile to melt the coldest of cynical hearts.

I asked the effervescent Tina why was this aircraft so empty. She squatted in the aisle, moved a little closer to me, looked over her shoulder in the manner of a co-conspirator and said “I guess no one wants to come to Trump Town anymore, do they?”

Tina, may you never fly close to the sun.

The pundits have spoken a million words and then some.

The television networks have screamed until their lungs have bled with righteous indignation and some with blessings. The national printed press is in seventh heaven with such raw and visceral material given to them on a daily silver platter.

(Mind, you are not alone. We have our own distraction in the United Kingdom in the form of the non-too-eloquently-named Brexit …)

I decided to cut through the media circus of “surrogates” and “alternative facts” swirling around the Trump administration, and talk directly to the denizens of the D.C. swamp.

I asked a random nine visitors and residents of Trump Town alike to tell me in a few words how they felt about the new administration and to allow me to photograph them showing just one simple gesture that sums up their feelings to the new order.

They were the silent, frustrated voices of everyday folk, some sad and angry, some happy and looking forward to President Trump’s vision of new America. Voices clear yet unheard in the raucous cacophony that is now Trump’s America. 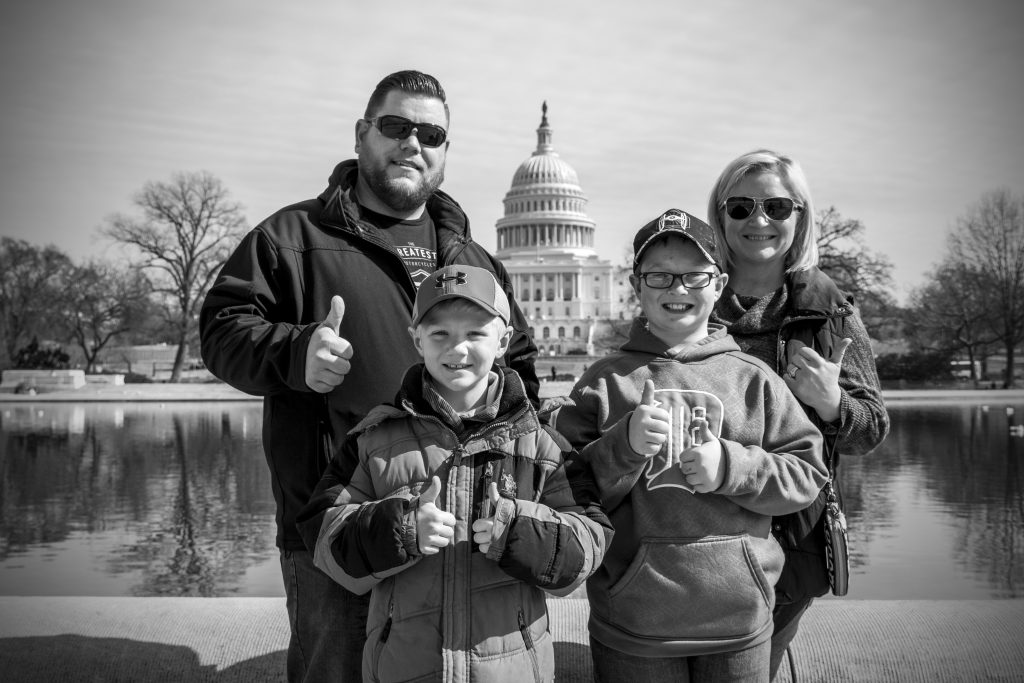 The Machlit family from Texas – “Proud approval”
“[Trump’s] policies will help this country. He is determined to keep jobs in America and he supports the right to bear arms, which I wholly agree with. I believe that he will make this country safer and give a voice to those who have felt in the past that they did not. I am very pro the wall, and President Trump is going to keep his promise to build the wall and this will keep America safe.” 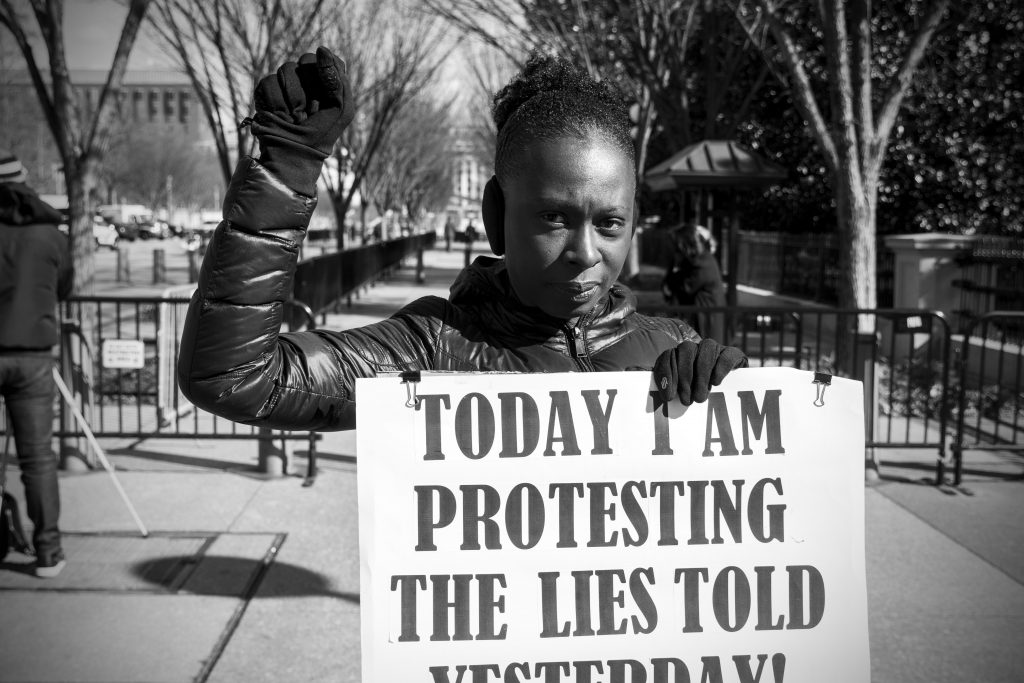 The first time protester – “Anger”
Tee Turonda, 47, has been a resident of Washington D.C. all her life. “I am here protesting outside the White House every day in my lunch hour. I have never protested about anything in my life before. I am not an activist, but this man has made me so very angry. That’s it. Angry, just so angry. I just had to get out here. [Trump] is a bully, a racist and a misogynist. I can’t believe that women have voted for him. Why? How could they do that — what were they thinking? I can only hope that this whole circus falls apart.” 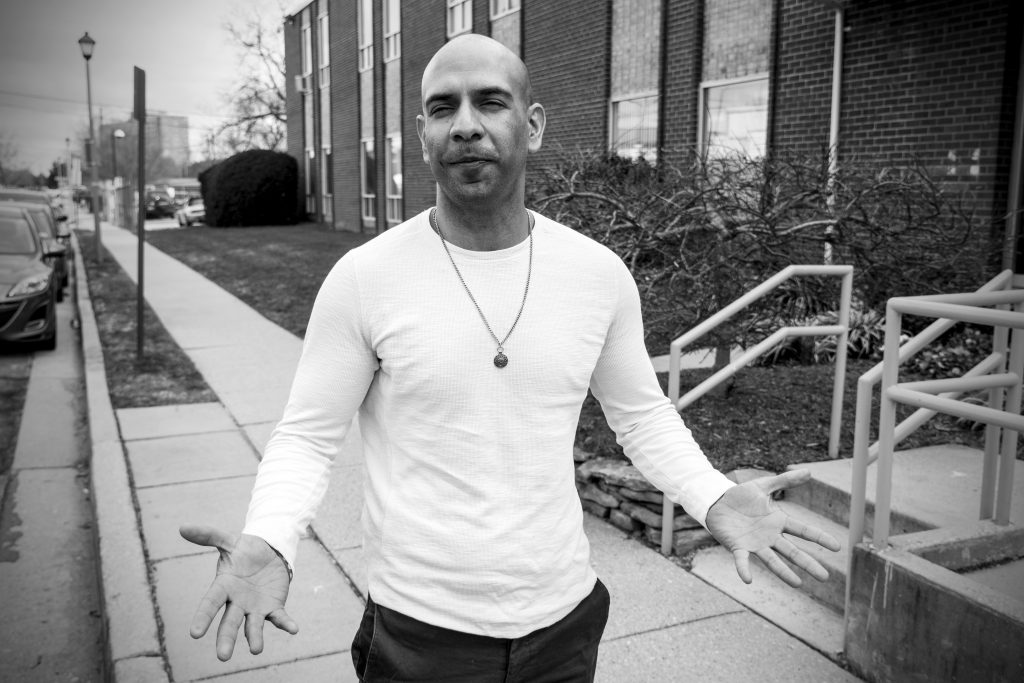 The Uber driver – “Uncertainty”
Mohammad, 35, is originally from the Panjshir Valley in Afghanistan, the birthplace of the legendary ‘Lion of the Panjshir,’ Mujahidin leader Ahmad Shah Massoud. He’s been in the U.S. now for four years and currently drives an Uber cab in the District.

In Afghanistan, he worked as a security advisor to the sometimes-controversial U.S. security company Blackwater. Mohammad came to the U.S. on a special immigrant visa and next year hopes to gain his full citizenship. In his spare time, Mohammad is at the Strayer University studying criminal justice administration with the ultimate goal of becoming a D.C. cop.

“I want to serve the country that has given me so much. Truly I want to serve MY country. I feel terrible and uncertain about the future with this new administration. Why are they teaching everyone that all Muslims are terrorists and a threat to America? I think [Trump] is the real threat to America. But I don’t think he will last very long, as every day this administration seems to be involved in a new scandal.” 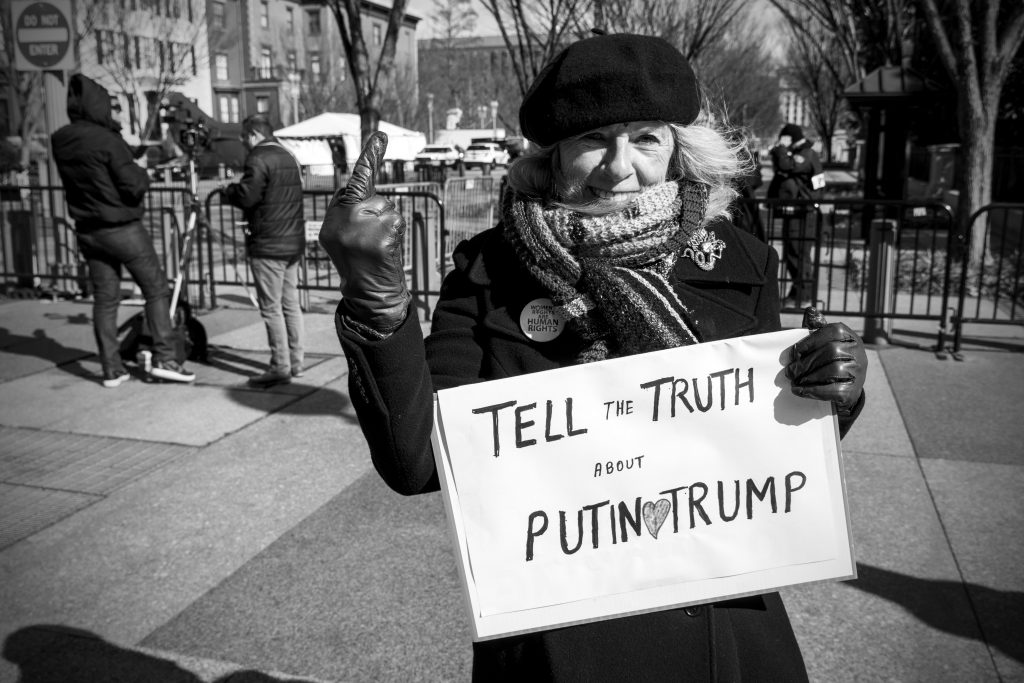 “Here in D.C., all sense of reality has vanished — completely gone. These are the same dark days that my parents must have feared in the early 1930s at the slow rise of the Nazi party. There is a real and tangible comparison between Hitler’s Germany and this administration. A demonizing of Muslims, immigrants, and Mexicans. Mix this in with a spineless Congress and the checks and balances that are supposed the keep this fool in check are crumbling.”

I asked Marione if she was given an audience with President Trump, what would she say to him? She replied: “Please resign and take everyone with you. That is all.” 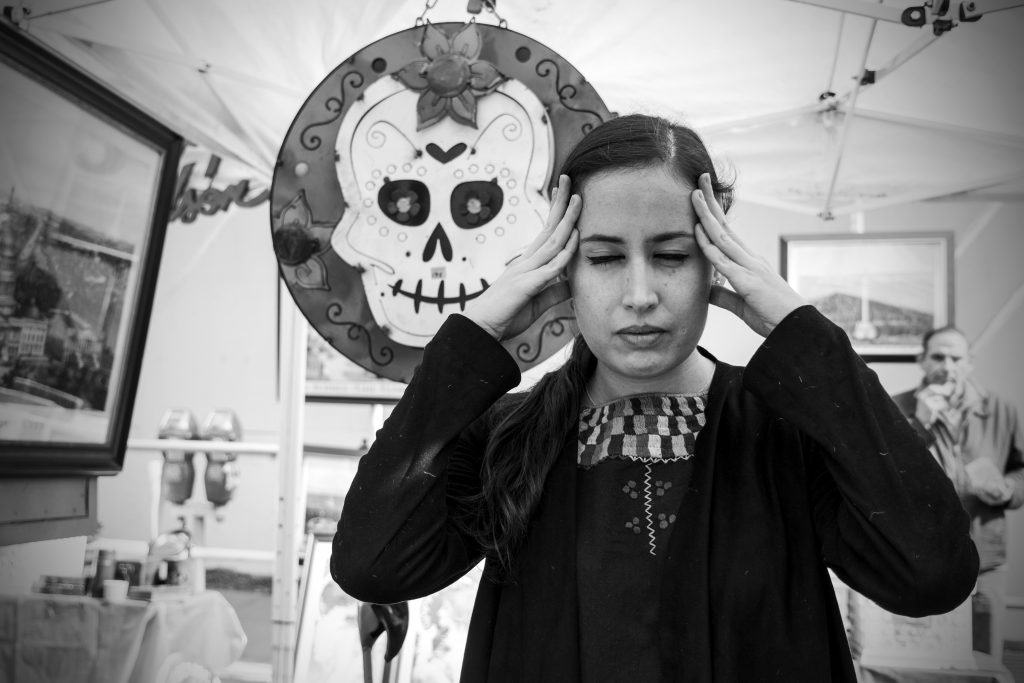 The Humanitarian – “All this political noise gives me a terrible headache”
Vanessa is a manager of institutional giving for a well known non-profit in D.C.

“I am so frustrated that we are not going forward. We are just going backwards, we now have a very twisted version of democracy. Democracy has become the first casualty in this new administration. I never felt discriminated before as a Mexican living in the U.S., never — but now I do.

We are not rapists and drug dealers or ‘bad hombres.’ It makes me so mad, I have no respect for [Trump] at all. My concern is that some executive order will be put in place that will somehow stop me working or studying here in the U.S. Nothing in this administration makes any sense. I want to ask him where all this hate comes from.

All the political noise now just gives me a headache. [Trump] is just a clown.” 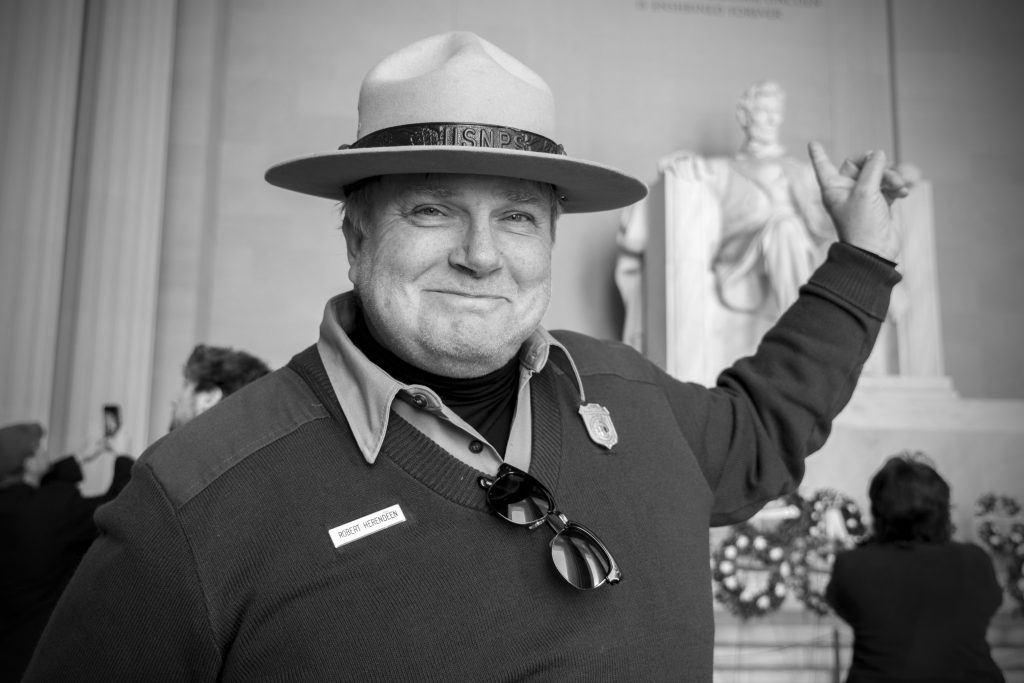 The Park Ranger – “Refer to the boss, Abraham Lincoln”
Robert Herendeen, 58, is a park ranger at the Lincoln Memorial.

“America needs to rediscover its hope and learn to heal its divisions. The American people are anxious to move forward, not backwards.” 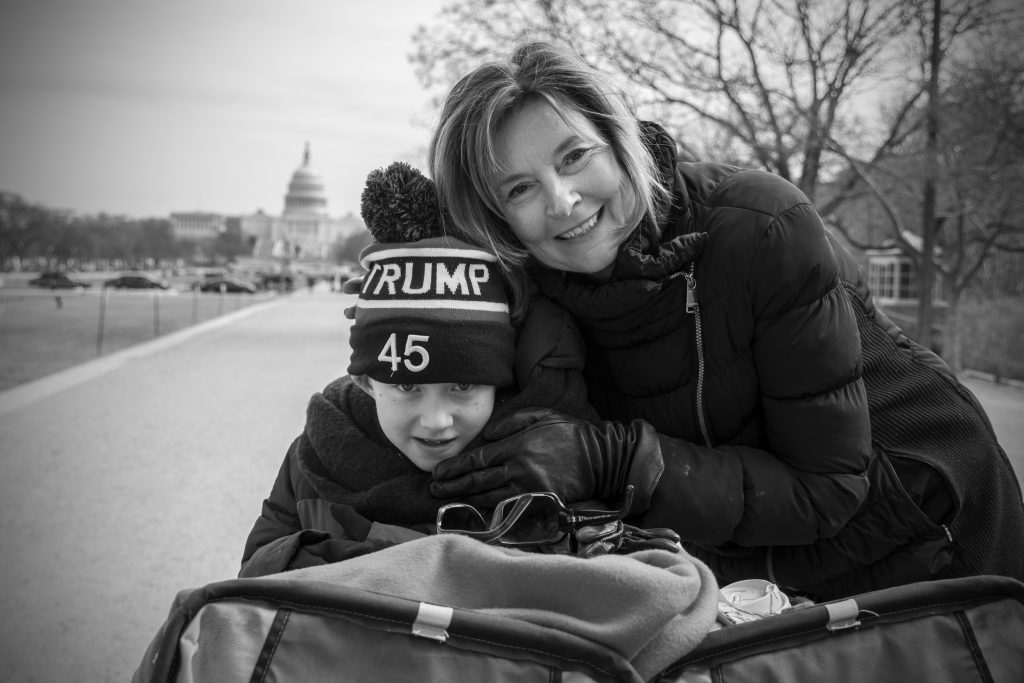 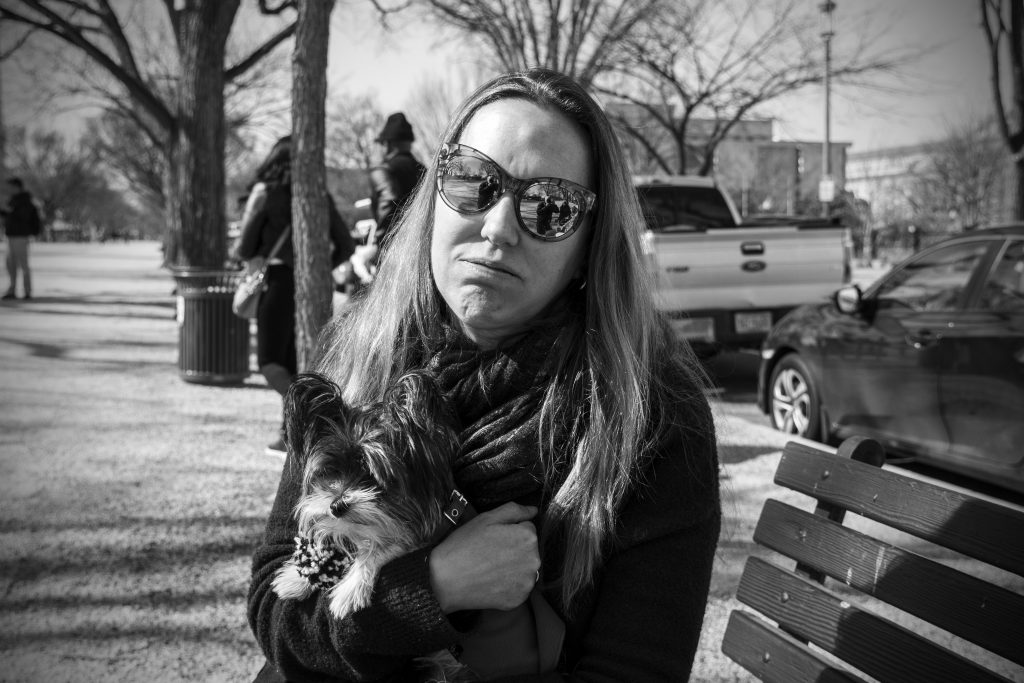 The Californian with a mission. – “Fed up”
Wendy Schulc, 50, from Oak Park, California is protesting with her 6-month-old puppy, Reinhart.

“I have come to Washington, D.C. with Reinhart to protest at the election of Donald Trump as President of the United States. I can’t get near him or the White House, so I am taking Reinhart to the Trump International hotel here in D.C. to let him pee on the steps. This is our protest.

I voted for Hilary [Clinton], as she was just so much better qualified. I can’t believe what Trump is doing, I can’t believe it. I am so embarrassed at the demeaning things he says to people, women, immigrants and you, the media — he hates you. And alternative facts, what’s that? Just a name for lies. I can’t think of any one thing I like about him — not one. I’m sorry.” 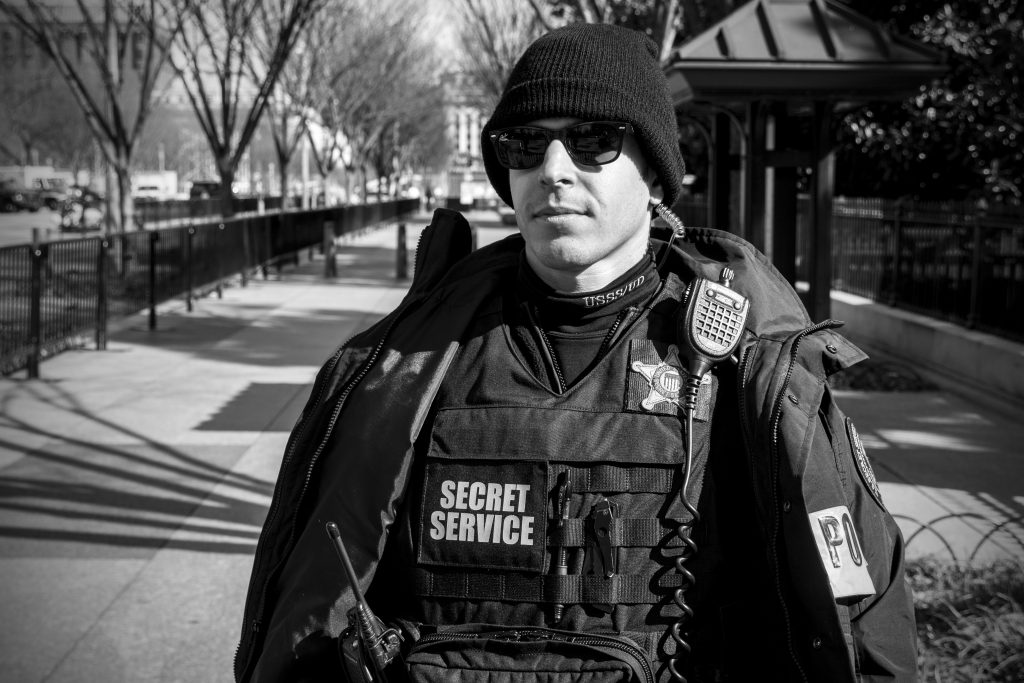 The Secret Service policeman on duty outside the White House – “Polite, no comment”
Question: “What do you think of the present administration?”

Answer: “I cannot comment, Sir. We have a department for that.”

All photos by Sebastian Rich.

Above: Photos by Sebastian Rich