Brokered vs. contested conventions. Whatever they’re called, there have been more than you think.

Or would it be an “open” convention? And what’s the difference, anyway?

“I don’t know that there’s any official definition” for each of the different convention scenarios, said Timothy Hagle, a political scientist at the University of Iowa.

Most experts seem to agree that the convention would be contested if no candidate wins a majority, or 1,237, of the delegates in the primaries. The GOP convention would shift into brokered territory if no candidate secures the nomination on the first ballot, and one or more additional rounds of voting are required. (The use of the informal term “open” convention applies to both cases).

Regardless of the terminology, Hagle said, “we’re in a situation where it looks like the Republican race isn’t going to have a clear winner.”

Trump has a solid delegate lead but could enter the Republican National Convention in Cleveland in July without having won the delegates needed to clinch the nomination on the first ballot.

Republican Party leaders who oppose Trump are hoping for a brokered convention, which would give delegates a chance to nominate a candidate with more appeal to women and minority voters.

The possibility of a brokered convention seemed remote last summer, when Trump’s campaign was still in its infancy and establishment figures like former Florida Gov. Jeb Bush and Wisconsin Gov. Scott Walker appeared poised to take off in the GOP primaries.

But now there’s about a “fifty-fifty” chance of that happening, said Gregory Magarian, an election law expert who teaches at the Washington University Law School. “Trump has a very clear path to getting a delegate majority, but it is a fraught path.”

If Trump fails to lock up the nomination in the primaries, the 2016 convention would be the first in at least four decades to feature some form of a floor fight. But contested or brokered conventions aren’t that rare in the scope of American politics. 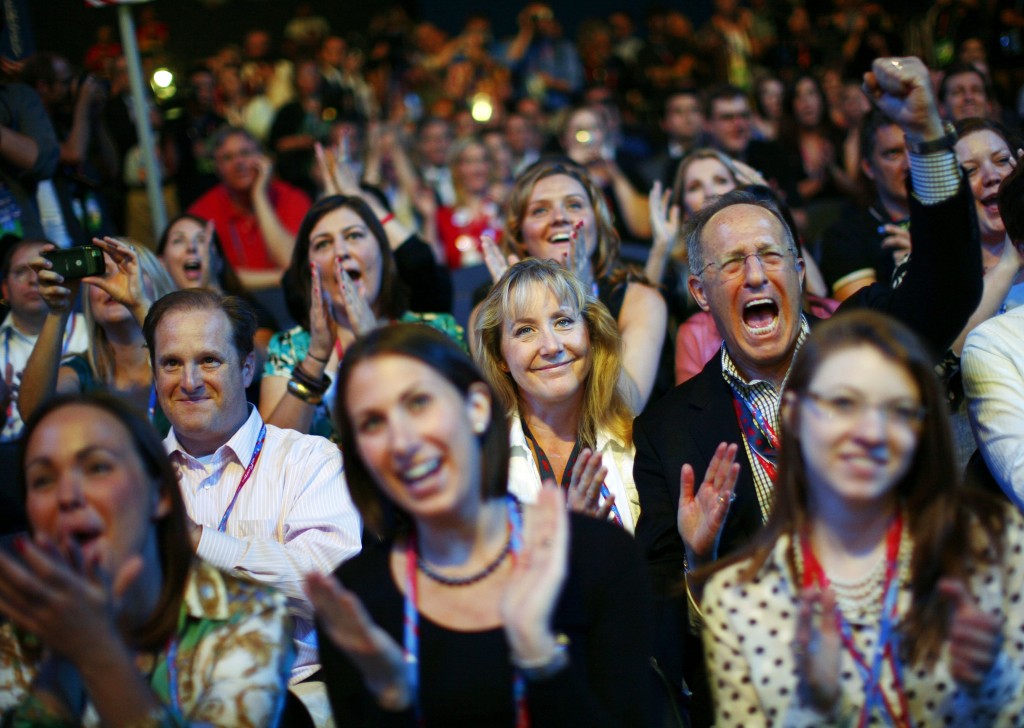 Delegates cheer during the opening session of the 2012 Republican National Convention in Tampa, Florida. Photo by Eric Thayer/REUTERS

Democrats have had several raucous conventions, including the 1924 contest, which required a record 103 ballots, or rounds of voting, to nominate John Davis. Franklin Delano Roosevelt needed four ballots to win the 1932 nomination.

The GOP has had ten contested conventions since it started holding national conventions in 1856. The first was 1860, when neither Abraham Lincoln or William Seward entered the convention with a majority of the delegates. It took Lincoln three ballots to secure the nomination.

James Garfield won the Republican nomination in 1880 after 36 ballots (a record for the party). His vanquished rivals included former president Ulysses S. Grant, who entered the convention with 40 percent of the Republican delegates but failed to secure the nomination.

Dwight Eisenhower entered the 1952 convention having won just 26.3 percent of the delegates in the primaries. But he still went on to win the nomination over Ohio Sen. Robert Taft in the last true brokered convention for either party.

The last contested convention took place in in 1976, when Gerald Ford and Ronald Reagan both came close but failed to win enough delegates to clinch the nomination outright. Ford went on to win on the first ballot.

Four decades later, Trump is hoping for a similar outcome if he fails to reach 1,237 delegates by the end of primary season. But it’s unclear if his pledged delegates would shift their support to another candidate in a brokered convention, or go on and vote for Trump anyway.

Whatever happens, Hagle said, a historic convention might energize voters on both sides of the aisle.

“The convention over the last several cycles has been little more than a week-long commercial for the party and candidate,” Hagle said. “If it’s really close, the rules are going to matter and people are going to pay closer attention.”