Trump’s cabinet is mostly white and male. What will that mean for policy? 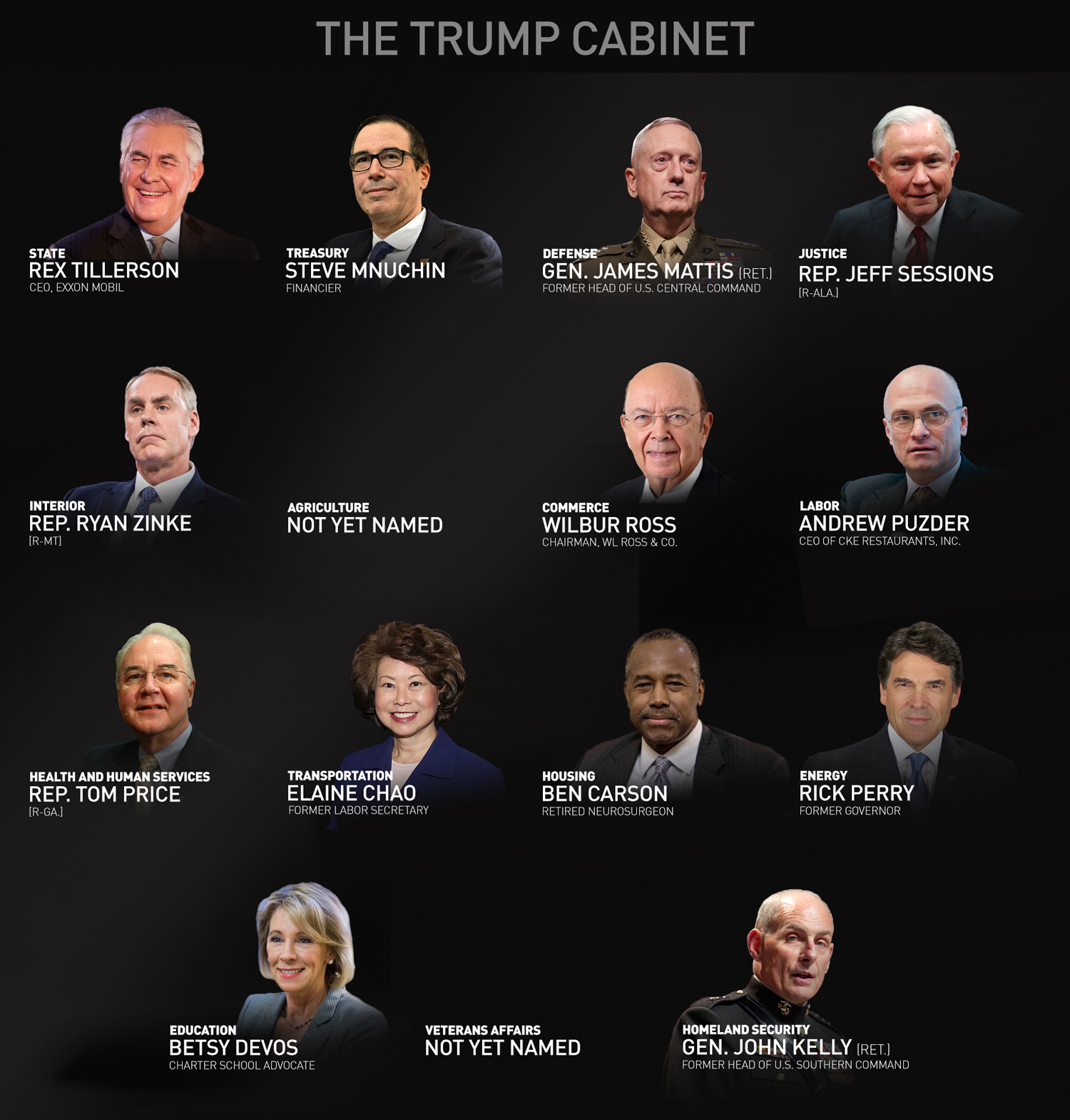 President-elect Donald Trump and his transition team have received scathing criticism for putting together one of the least diverse cabinets in recent history. The cabinet is nearly all-white and all-male — and mostly older and affluent.

This lack of cabinet diversity could have concrete consequences on everything from criminal justice to health care policy, according to advocates and experts who study diversity and interviews with current and former cabinet officers.

“There are many white men who are extremely savvy and sensitive and understanding of diversity. There is no question about that,” said Marc Morial, the head of the National Urban League. “The question is, do people feel their voices are heard? That’s really important, that communities feel someone is at the table with my point of view.”

So far, only three of Trump’s 13 cabinet picks are not white men: Ben Carson, Trump’s nominee for the Department of Housing and Urban Development, Elaine Chao for labor secretary and Betsy Devos for education department.

Gov. Nikki Haley (R-S.C.), who is Indian-American, has also been named ambassador to the United Nations, and Linda McMahon was tapped to head the Small Business Administration. Both of those positions are not in the immediate cabinet but are considered cabinet-level. Trump has not yet chosen his secretary of agriculture or secretary of veterans affairs. 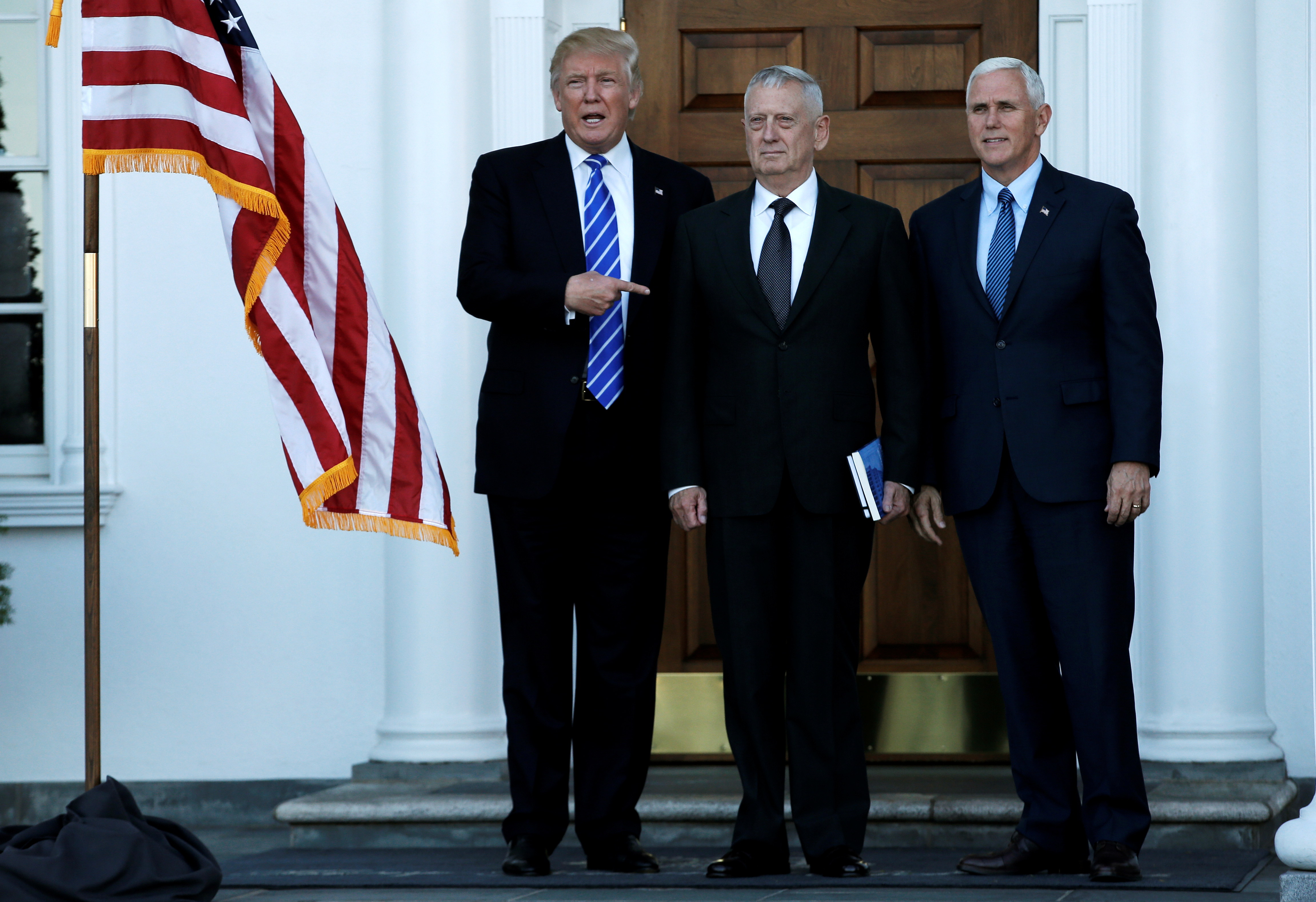 President-elect Donald Trump has put together one of the least diverse cabinets in recent U.S. history. Photo by Mike Segar/REUTERS

Trump has also been criticized for not choosing a diverse range of people when it comes to wealth and age. According to a Quartz analysis, the president-elect’s 17 cabinet-level picks have a net worth of at least $9.5 billion — that’s more money than the poorest third of Americans, or 43 million households, combined.

“[The President-elect’s] selections are more of a reflection of what he values, which is money,” said Lauren Burke, a political analyst at Politic365.

“He’s hiring by the mirror image rule,” said Morial, by opting almost entirely for cabinet members whose backgrounds are similar to his.

“He wants an administration that looks like the country, that looks like America,” Manigault said. “He really wants to make an impact in terms of his vision by appointing and selecting the best that America has to offer.”

“Our country is getting blacker and browner,” Burke said, “And now, come January, we’re going to have a cabinet that isn’t going to reflect that at all.”

Manigault said she could not speak to the president-elect’s selection of his top cabinet members, but added that 80 percent of the administration is made up of lower-level posts.

The cabinet Trump assembled stands in marked contrast to President Obama’s first-term cabinet. Eight of Obama’s cabinet appointments were women or minorities. But even then, Obama’s administration was harshly criticized for becoming a “boys club.” In his second term, Obama appointed fewer women than the first time around.

While Obama will end his tenure with one of the most diverse cabinets in history, according to Burke, his appointments in top-level positions aren’t as progressive as many of his supporters had hoped.

“It matters when a president names an African-American to a top-level position like the Secretary of State more than when it’s the U.S. trade representative,” she said. “[President Obama] started out really slow. Had Trump selected two more African-Americans, he’d be ahead of the president in his first four years for top level positions. It shouldn’t even be close considering African-Americans support Democrats 90 percent of the time.”

In his last two years in office, though, the president put together the first administration where the majority of top policy positions were held by minorities or women and has since been credited with the most diverse cabinet in U.S. history, according to an analysis by the University of California at Berkeley. The process has not been without hiccups. Berkeley’s lead researcher, Anne O’Connell, points out that Senate confirmations of women and minorities “took longer on average than their white, male counterparts.”

The 15 possible cabinet appointments a president can make tend to be the most visible leadership positions. While diversity at the top matters, O’Connell said it’s also the lower-level positions within government departments that play a role in policy.

“An administration that is more actively nominating top positions that represent gender or race and ethnic diversity are more likely to reflect that in staffing the department itself,” she said, noting that the departments of agriculture, defense and treasury have been the least diverse throughout several presidential administrations.

Cabinet members under the Obama administration, including white men, took the president’s commitment to diversity to heart, Secretary of Agriculture Tom Vilsack said in an interview.

“[President Obama] has created an opportunity for America to understand that diversity is a blessing,” Tom Vilsack told the NewsHour. “I think at the end of the day we’re going to learn that this country operates best when it surrounds itself and appreciates diversity and doesn’t shun it.”

Vilsack said when he took office he inherited 14,000 civil rights cases against the Department of Agriculture that went back decades. Since then, he has made major changes.

“We’ve created a cultural transformation in which we’ve made a concerted effort to cast a wider net for talent, so now we have a much more diverse workforce,” Vilsack said. “Our senior leadership team at the USDA is one of the most diverse if not the most diverse in the federal government.”

Vilsack receives monthly reports on hiring practices and launched initiatives to diversify the agribusiness workforce, which is predominately white.

Both Burke and O’Connell noted that, often, Republicans don’t face the same pressure to assemble a diverse cabinet, mainly because the makeup of the GOP is mostly inconsistent with the demographics of the American population overall — skewing more white, wealthy and male. Political gesturing often results in Democrats being held more accountable to reflect the diversity of their constituents, sometimes with disappointing results.

Before Obama took office, George W. Bush held the record for the most diverse group of top advisors in history. The Associated Press reported at the time that President Bush matched President Bill Clinton’s record for diversity in the cabinet. Bush also had more minorities and women advisers overall than Clinton.

One of those appointments was Alphonso Jackson, who served as the secretary of Housing and Urban Development from 2004 to 2008. Jackson had spent decades working with the St. Louis and Dallas housing authorities before he became deputy HUD secretary in 2001.

“Because of my skill set and personal firsthand knowledge of urban issues, I was able to provide tangible advice to the president on issues faced by urban areas,” Jackson wrote in an email to the PBS NewsHour.

Jackson made minority homeownership a key part of his mission, telling the NewsHour in a 2008 interview that he was focused on making communities more inclusive socially and economically. His tenure was later marred by the housing crisis and accusations of cronyism, though no charges were ever filed.

When looking at the Trump cabinet picks, Jackson said the president-elect is off to “a good start,” but encourages him to go further.

“I humbly would advise President-elect Trump and his team to select individuals who are committed to serving our country and implementing his vision based on diversity of thought and opinion,” Jackson said.

Manigault, who worked in the Clinton administration and sits on the Trump transition executive committee, said the team is working to find the most qualified individuals for the job. “We choose the best candidates, and if by chance that candidate is a Latino or a woman, we celebrate that too,” she said.

Manigualt said those criticizing the president-elect should consider his current business, which she said is made up of a wide range of people.

“Look to what he’s already done in his organization in terms of diversity, and then you have an indicator what he’s going to do in his administration,” she said.

But when it comes to embracing diversity, some say the early signs are discouraging.

“Our country is getting blacker and browner,” Burke said, “And now, come January, we’re going to have a cabinet that isn’t going to reflect that at all.” Burke expects the Trump administration to miss the mark by a wide margin for his entire presidency, an issue that will harm vulnerable communities she says are most affected by policy decisions.

“The defining thing we’re going to see here is a massive effort toward privatization that doesn’t reflect 99 percent of the country,” she said. “But when you do see these types of major policy shifts that most polls would indicate Americans don’t want, there will be a backlash to that. Whether that backlash is seen in the next two or four years is uncertain.”

Morial, of the National Urban League, pointed to protests that erupted after the fatal police shooting of Michael Brown in Ferguson, Missouri in 2014. Even though racial tensions flared in Ferguson, Morial said it could have been a lot worse had it not been for then-Attorney General Eric Holder, the nation’s first African American justice department chief, who provided a “calming influence.”

Morial said he is not giving up on Trump though, noting that the president-elect still has many positions, including a number of deputy undersecretaries, to fill.

“I would encourage Trump to realize how important this is if you are going to truly make America great for everyone,” Morial said.