California’s Central Valley Finds Itself on the Political Map 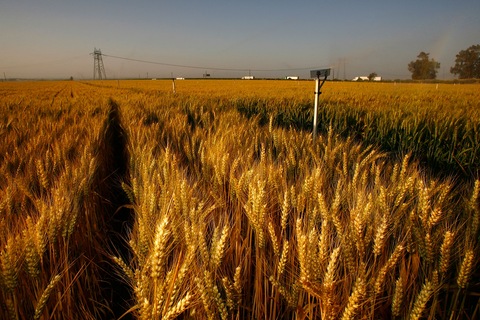 Wheat crops near Bakersfield, Calif., in the state’s Central Valley.

When most people think of The Golden State, they tend to think of tourist destinations like Hollywood or the Golden Gate Bridge. But there is another swath of California that is often overlooked.

Known as the agriculture-rich Central Valley, it’s situated between the Coastal and Sierra Nevada Mountain ranges — and stretches about 450 miles, from Redding in the North to Bakersfield in the South. That’s roughly the distance between Washington, D.C., and Boston.

This region, which has some of the highest foreclosure rates in the country, has been slow to recover from the recession. Almost all Central Valley counties exceed the state unemployment average of 12.5 percent, some by two or three times.â€¨

About 6.5 million people live here, making it the state’s fastest growing region, according to the 2010 U.S. Census. Between 1990 and 2009, the population here grew 44 percent (compared with 24 percent growth statewide). The new residents, many of whom were drawn to the area’s cheaper housing, tend to be independent voters — and that has turned this into one of California’s only swing regions.

A report released by California’s Secretary of State last week showed that a full 20 percent of voters in California do not identify with a political party.

In Fresno County, Democrats outnumber Republicans by less than one percentage point, the smallest margin in the state. Eleven percent of registered voters declined to state a party affiliation. The county voted for George W. Bush for president in 2000 and 2004, but President Barack Obama narrowly won here in 2008.

Jim Boren, the Fresno Bee’s editorial page editor, says “independent voters are up for grabs here. As coastal California tends to go more Democratic and inland California tends to be conservative, there are a lot of moderate and declined-to-state voters in the Valley.” As a result, the Valley, as it’s called by locals, is getting significant attention this election season.

On Friday, during her 36th campaign stop in the region, Republican gubernatorial candidate Meg Whitman took a swipe at her Democratic rival Jerry Brown for largely ignoring the region and its issues, such as unemployment and a water shortage she attributes to environmental regulations. “He is not going to bring balance back between environmental regulations and the needs of jobs and people, and I will. He doesn’t care about the Central Valley,” she said. Whitman has blanketed the area with billboards, many in Spanish, like one titled “Mas Trabajos” in the town of Mendota, where 39.9 percent of the largely Latino population is unemployed.

For his part, Jerry Brown made four campaign stops in the Valley over the weekend. The Fresno Bee reported that Brown “spoke about the need for California to continue investing in alternative energy sources, a move he suggested his opponent would oppose.” Then he took a jab at Whitman, who had once compared Fresno to Detroit in describing the effects of the recession.

“We wouldn’t have to use foreign oil or we might not even have to buy Texas gas at some point. I know this other opponent whose name I don’t want to mention, she loves Texas. Oh yeah, and Detroit. I think she said something about Detroit, didn’t she?” Brown said, eliciting boos for Whitman from the audience.

It was here that a major turning point in the governor’s race occurred. Fresno was site of the state’s first Spanish language debate, and Whitman found herself on the defensive when Brown slammed her for hiring and firing of Nicky Diaz, an undocumented immigrant who worked as a housekeeper in the Whitman household for nine years. Polls show that Whitman is now trailing among Latino voters in the state.

The region’s Latinos have the potential to be much more influential in elections if they turn out to vote, says Fresno State University political science professor David Schecter. “The demographics are changing pretty considerably in the Central Valley. So in the last decade … we’ve gone to a majority minority community. So right now the Latino community is making up somewhere around 45-48 percent, and that has changed dramatically in the last decade from the mid-30s.”

Fiorina has been trying to persuade voters here that she is the candidate who will side with them on water issues. At issue is whether the U.S. Endangered Species Act should be waived by Congress so more water can be pumped into the agriculturally rich Central Valley, or if it should remain in place to protect the Delta smelt fish from extinction. Fiorina argues that Boxer is choosing fish over people, but both Boxer and Sen. Dianne Feinstein, D-Calif., say the issue is much more complicated than that. Appearing at a campaign event together in San Jose last week, both senators said they were influential in getting water allocations increased this year. Boxer also said she’s done a lot to improve the ailing economy here by helping to bring $1.75 billion in federal stimulus money here.

It’s not only the top ticket races that are garnering attention in the Central Valley. Three of four competitive Congressional races in the state are also taking place here. There’s the 11th District, which snakes across four counties from Santa Clara to San Joaquin. Regarded by many political observers as a toss up, both national parties are pouring money into the contest between two-term incumbent Democrat Rep. Jerry McNerney and Republican candidate David Harmer, who has Tea Party backing. When the NewsHour was in Tracy, Calif. recently to report on the Senate race, many residents were also closely following the House race.

In the 3rd District, in suburban Sacramento, incumbent Repulican Rep. Dan Lungren, a former state attorney general, is facing a tough challenge from Democratic candidate Ami Bera, a physician. The race is now tilted toward the Republican column, but is still close.

And in recent weeks, both national political parties started filtering large sums of money into the 20th District, usually a sign that internal polling shows the race to be close. Centered in Fresno, the district is currently represented by Democratic Rep. Jim Costa, who is being challenged by Republican Andy Vidak. Losing this district would be a real blow to Democrats, who hold a 51-to-31 percent voter registration advantage there. These districts are worth watching closely on election night.

NewsHour correspondent Spencer Michels will report on election results in California as part of the NewsHour’s election special on Tuesday night. Stay tuned.