Can a self-funded billionaire win over liberal Democrats?

Michael Bloomberg has already committed to spending approximately $150 million of his personal fortune on the 2020 presidential election. That’s more than the Democrats with the largest war chests — Bernie Sanders, Elizabeth Warren and Pete Buttigieg — spent through the first nine months of the year combined.

And he’s only been in the race for a little more than one week.

The billionaire former New York City mayor officially launched his presidential campaign last month, finally pulling the trigger on a White House bid after flirting with running in several past election cycles. He joins a crowded field that includes at least one other billionaire who is paying his own expenses: Tom Steyer

Their campaigns will test the country’s appetite for rich, self-funded candidates in a year where some of the most popular platforms for the leading Democratic 2020 contenders include vowing to tax the ultra wealthy to help pay for “Medicare for All” and other social programs.

Now that he’s in, Bloomberg has moved quickly to prove that he’ll spend exorbitant sums to win the Democratic nomination. His campaign has already taken out $30 million in television ads — more money than former Vice President Joe Biden has spent in total on his campaign so far.

“No one has ever spent at this level” at the start of a presidential primary campaign, said Hank Sheinkopf, a New York-based Democratic strategist who worked on Bloomberg’s 2009 mayoral race.

Bloomberg’s late entry into the race has forced the Democratic field to contend with a rival with national name recognition who can focus exclusively on voter outreach and won’t have to waste precious campaign time raising money from donors.

But Bloomberg and Steyer’s presidential campaigns come at a time of rising anger on the left towards the wealthy and their role in perpetuating wealth inequality, mudding their path to the nomination.

Both billionaire candidates have already come under fire from 2020 rivals. Sen. Amy Klobuchar of Minnesota criticized Bloomberg and Steyer Monday on ABC’s “The View,” saying “you just can’t simply allow wealthy people to come in and buy elections.” The comment echoed recent criticism of Bloomberg from Warren and Sanders.

In the current political environment, a Democratic candidate’s net worth — and subsequent spending — may matter far less than their perceived ability to win next November.

“I don’t submit to the idea that spending absolutely the most money actually buys you a victory,” said Bill Hillsman, a political strategist who consulted on Ross Perot’s self-funded presidential campaign in 1992.

“The message has to be compelling,” Hillsman said. Steyer and Bloomberg still have to prove to voters that they can beat Trump, he added. “I’m not sure that they have good answers.” 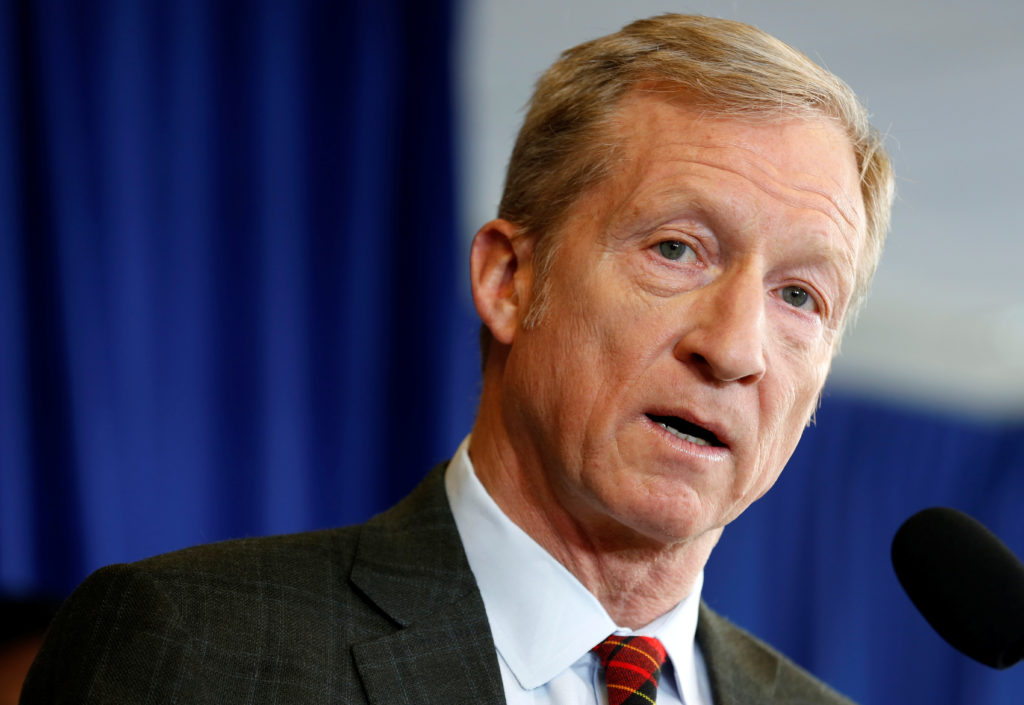 Tom Steyer, a 2020 Democratic presidential candidate, is a former hedge fund manager with a net worth of $1.6 billion. File photo by REUTERS/Joshua Roberts

Bloomberg campaign spokesman Marc LaVorgna declined to say if there was a limit on how much money the former mayor was willing to spend.

“Mike is committed to spending whatever it takes to ensure that Donald Trump is not reelected, no matter what,” LaVorgna said.

Entering the race late, Bloomberg has embraced an unorthodox strategy. He is foregoing heavy campaigning in key early-voting states like Iowa and New Hampshire and focusing instead on Southern and Midwestern states whose primaries don’t start until March.

The unusual approach is in keeping with self-funded candidates of the past, whose money offered freedom to run nontraditional presidential campaigns.

In 1992, Perot, a billionaire businessman from Texas who ran as an independent, spent tens of millions on T.V. advertising to introduce himself to the public. In a break from convention, the ad campaign included 30-minute segments where Perot laid out his economic vision with detailed charts and graphics.

Perot finished third, behind Bill Clinton and President George H.W. Bush. But he won 19 percent of the popular vote, the largest share for an independent presidential candidate in modern U.S. history.

Trump ran as a political outsider in 2016, promising voters he was not beholden to big donors and special interests. Trump funded his primary campaign early on, and ran a relatively bare bones operation that relied on generating attention through press coverage and social media.

Eventually the Trump campaign turned to fundraising after winning the Republican presidential nomination, working closely with the Republican National Committee. In the end, Trump spent $65 million of his own money, a fifth of his campaign’s overall general election spending. Still, many voters viewed Trump as an anti-establishment figure who would shake up the status quo, Hillsman said.

“Positioning himself as being independent and saying ‘I’ve got enough money, I don’t need to be bought and sold by donors,’ [that message] resonates with voters,” he said.

Steyer has adopted a similar approach in 2020. A first-time candidate for elected office, Steyer has run ads touting his climate change work and business career outside Washington. 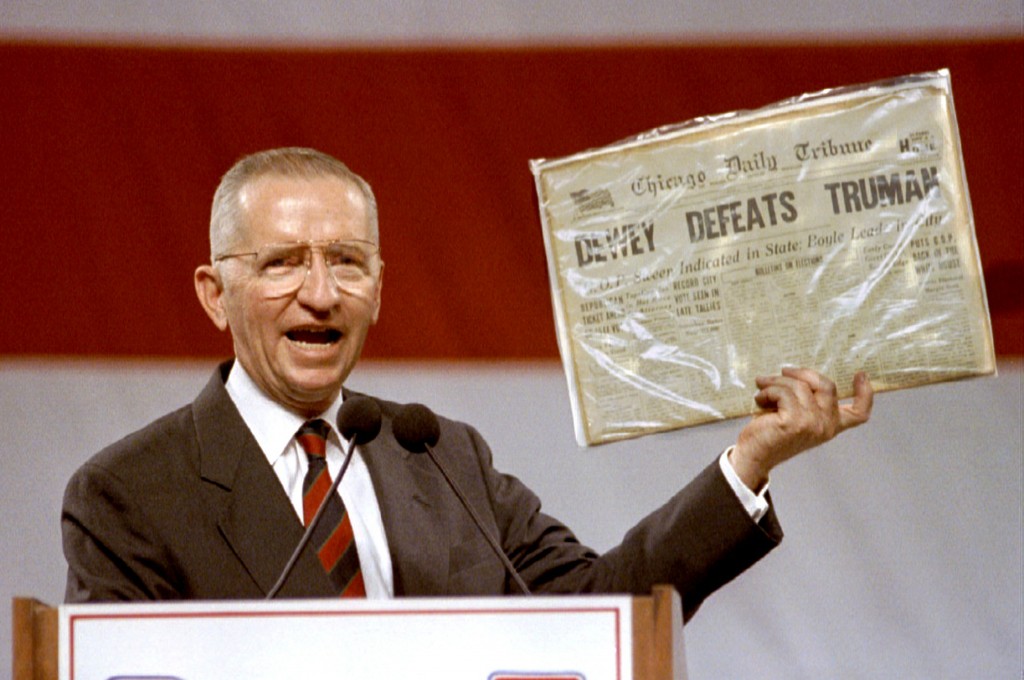 In 1992, wealthy businessman Ross Perot ran a self-funded presidential campaign and received 19 percent of the vote, the most for an independent candidate in modern U.S. history. File photo by REUTERS/Sam Mircovich

But he hasn’t gained traction in a crowded primary field dominated by several seasoned politicians. It hasn’t been for a lack of spending: Steyer has contributed $47.5 million of his own money to his campaign, and so far has outspent every Democratic candidate in the race.

Bloomberg’s campaign could be different. As a former longtime mayor of the country’s largest city, Bloomberg is better known nationally than Steyer, who ran the hedge fund Farallon Capital before focusing on environmental activism. Bloomberg’s name recognition was on display in a CNN poll released last week. It placed Bloomberg at 3 percent, trailing the top-tier but already tied with Steyer and several others in the middle of the pack.

In contrast, Bloomberg is the ninth-richest person in the world with a staggering personal fortune of $54.7 billion. To illustrate how much he could spend if he chooses to, the Trump and Clinton campaigns spent a combined $877 million on the 2016 general election; that represents just 1.6 percent of Bloomberg’s wealth.

As the primary continues, the Bloomberg campaign is planning to contrast the former mayor’s self-made business career with Trump’s.

Bloomberg grew up in a middle class family. After working on Wall Street, he founded Bloomberg LP and turned it into a leading financial information company. Trump got his start from his wealthy real estate developer father, and inherited hundreds of millions of dollars.

The Bloomberg campaign hinted at the difference in its first T.V. ad, calling the former mayor a “middle class kid who made good.”

Hillsman, who consulted Perot’s 1992 campaign, said an unlimited budget on its own doesn’t guarantee success. “There’s a point of diminishing returns with advertising. At a certain point you just annoy the people you’re trying to convince,” Hillsman said.

Others warned of the challenges facing self-funded candidates who don’t have clear political bases in the Democratic Party. As mayor, Bloomberg developed a reputation for being socially liberal and fiscally conservative. But his record also includes supporting stop-and-frisk policing, a policy criticised for targeting minorities and opposed by many progressive Democrats. Bloomberg recanted his support for it shortly before he launched his White House run.

Envisioning Bloomberg’s path to winning the nomination “gets to be real, real difficult,” said Roy Fletcher, a Republican strategist. “The money maybe adds a little bit of intrigue to it, but unless he has a real compelling, dynamic message, I don’t see where he moves the needle.”