Can Republican leaders control the party’s outsider candidates in 2018?

Before Roy Moore was accused of sexual misconduct, Senate Republican leaders appeared confident that in 2018 they could avoid the pitfalls of past election cycles, when conservative primary voters nominated controversial Tea Party favorites like Christine O’Donnell and Todd Akin who lost badly in their general election campaigns.

Senate Majority Leader Mitch McConnell used O’Donnell and Akin as cautionary examples at a Rose Garden press conference with President Donald Trump in mid-October where he laid out his plan for defending control of the Senate in 2018.

“Our operating approach will be to support our incumbents, and in open seats to seek to help nominate people who can actually win in November,” McConnell said.

Moore’s allegations three weeks later upended the Senate election in Alabama. But Moore’s refusal to drop out of the race, despite intense pressure from McConnell and other Republicans, has also highlighted how hard it will be for party leaders to exert influence over the 2018 election — the first midterm in 12 years with a Republican in the White House.

National Republican leaders no longer have “direct influence in choosing the outcome in primaries,” said Robert Graham, a former chairman of the Arizona Republican Party who is weighing a run for retiring Sen. Jeff Flake’s seat. “I think their power has diminished significantly.”

Steve Gill, who hosted a popular conservative talk radio show in Tennessee — another state with a high-profile Senate race next year — was more blunt. McConnell and outside groups tied to the Senate GOP leadership are in for a rude awakening next year, Gill said.

In 2018, Republican leaders “think they can just pull the playbook off the shelf,” Gill said, “but it’s not going to work.”

Gill and other grassroots activists may have a point. The party’s strategy of shutting down conservative primary challengers succeeded in 2014, but the political climate in the country has changed since then.

Four years ago, with Barack Obama in his sixth year in office and Democrats in control of the Senate, Republicans lacked a national leader who could rally the party’s conservative base — or challenge the existing GOP leadership in Washington.

McConnell and other Republican leaders in Congress stepped into the power vacuum to guide the party through the midterm elections in 2014.

Republicans that year had the luxury of focusing on repealing the Affordable Care Act and winning back the Senate; as the opposition party, they faced less pressure from voters to produce concrete results beyond fighting the Obama administration’s agenda.

That dynamic has shifted, with Republicans now in control of both chambers of Congress and the White House. And the national leadership vacuum McConnell helped fill in 2014 no longer exists, with Trump firmly in control of the party. 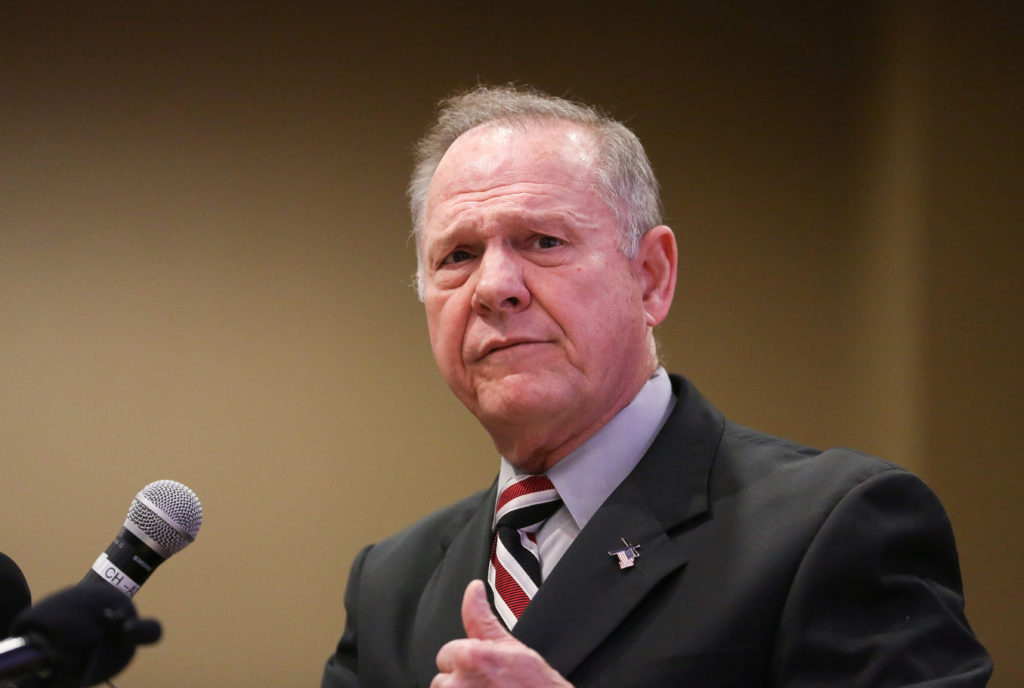 Yet despite Trump and the party’s success at the ballot box, polls show that Republican voters remain deeply frustrated with their representatives on Capitol Hill. One year out from the elections, 60 percent of Republican voters disapprove of the congressional GOP’s job performance, according to a new Quinnipiac University poll taken after the news broke of Moore’s alleged sexual misconduct.

“For a lot of us down here in flyover country, the status quo is the same politicians getting elected year after year after year, and nothing changes,” said Joe Carr, a former Republican state lawmaker in Tennessee.

After Sen. Bob Corker announced last month that he wouldn’t seek re-election next year, Carr — who considered running for Corker’s seat before opting to run for the state senate — called Rep. Marsha Blackburn, another Tennessee Republican, and encouraged her to make a bid for the Senate.

But Carr said in a recent phone interview that his support came with a caveat: the expectation that Blackburn, who has since announced her Senate candidacy, would oppose McConnell in Washington.

But striking that balance won’t be easy, a lesson Republican Ed Gillespie learned in losing the Virginia governor’s race. Gillespie was criticized for embracing Trump and his policies, and for not supporting the president enough.

In Alabama, Moore deftly tapped into voter frustration with the party’s leadership in Congress. The former judge beat Sen. Luther Strange — who was backed by McConnell and Trump — in the Republican runoff in September by campaigning on the promise to stand up to McConnell in the Senate.

The 2018 election will be filled with Republican candidates hoping to capitalize on conservative voters’ displeasure with Washington.

Moore has stepped up that message in recent days, and many Republicans in Alabama have said that the sexual misconduct allegations he faces won’t stop them from voting for him in the general election on Dec. 12.

And while Moore won’t be on the ballot next year, the 2018 election will be filled with Republican candidates hoping to capitalize on conservative voters’ displeasure with Washington.

Chris McDaniel, a conservative state senator in Mississippi who lost a bitter GOP primary to Sen. Thad Cochran in 2014, is expected to run for the Senate next year against Roger Wicker, the state’s junior Republican senator. McDaniel will likely have the backing of Steve Bannon, Trump’s former White House adviser.

In Arizona, Kelli Ward is running for Flake’s seat as a pro-Trump candidate who embraces the president’s nationalist, America-first agenda. Bannon endorsed Ward last month as part of his declared “war” against Republican incumbents.

The Senate Leadership Fund, a super PAC allied with McConnell, has already gone on the offensive against McDaniel and Ward, in a sign of how seriously the party establishment is taking primary challenges from the right.

The group released a television ad over the summer criticizing Ward for hosting a town hall meeting in 2014 on the issue of airplane contrails, the white streaks of condensation that jets make in the sky. Conspiracy theorists believe “chemtrails” contain chemicals sprayed by the government in a secretive program to control public health and the environment.

“Chemtrail Kelli’s got her head in the clouds with crazy ideas,” a narrator says in the ad.

The ad was a throwback to 2014, when Republican leaders and their allies successfully branded conservative primary challengers as too extreme for the general electorate. 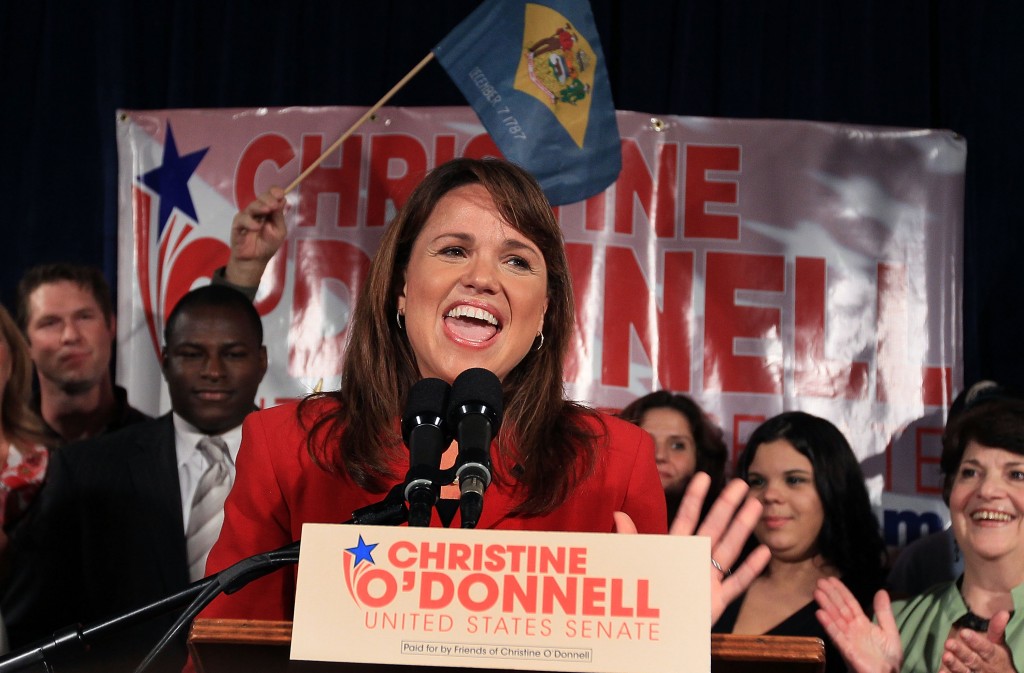 The strategy was developed to avoid nominating candidates like O’Donnell, who was fiercely criticized during her 2010 Senate campaign in Delaware for once saying that she “dabbled in witchcraft,” and Akin, who claimed during his losing 2012 Senate race that pregnancies from “legitimate rape” were rare.

Chris Pack, a spokesman for the Senate Leadership Fund, wrote in an email that mainstream conservative groups increased their efforts to block “far right wing” candidates after 2010. “We decided to start getting involved in primaries when there is a clear choice between a general election winner and loser,” Pack said.

The allegations against Moore have given party leaders an early test of their influence ahead of the 2018 elections.

Some Republicans argued that savvy primary voters would weed out flawed candidates next year, and wouldn’t fault Republicans in Congress for the lack of major legislative achievements during Trump’s first year in office.

“I’ve run into Republicans who are frustrated with the pace” of change, said Scott Golden, the chairman of the Tennessee Republican Party. “But everybody is excited with the direction that we’re moving. They’d just like to see us get there faster.”

But others said Republicans in Washington were seriously underestimating the GOP grassroots’ frustration.

Rhett Ruggerio, a top Democratic lobbyist in Delaware, had a front row seat for O’Donnell’s Senate race back in 2010. While she may be best remembered for her rocky general election, Ruggiero said it’s easy to forget how popular she was with primary voters.

“O’Donnell hit on this fringe group in the Republican Party and energized them, and they all came out to vote,” Ruggiero said. The same thing could happen in 2018, he added.

“What’s trending in the Republican Party [right now] is the fringe right. They’re the ones with the energy, they’re the ones that are engaged in party politics,” Ruggiero said. In midterm elections, “history has shown those are the campaigns that are typically successful.”

Gill, the former conservative radio talk show host in Tennessee, agreed. Republican leaders don’t “grasp the anger that is out there against the establishment,” he said. “The conservative base, the populist base, is not buying what they’re selling.”