One week after President Donald Trump took office, Republican leaders said they planned to pass a health care bill, a tax overhaul, and an infrastructure package by the start of their August recess. The plan, announced by House Speaker Paul Ryan and Senate Majority Leader Mitch McConnell at a Republican retreat in late January, included boosting defense spending and setting funding aside to pay for a border wall between Mexico and the United States, one of Mr. Trump’s top campaign promises.

Trump also vowed to repeal and replace the Affordable Care Act and fund construction of the border wall in the first months of his presidency, so the White House and Republican-controlled Congress could move on to tax reform, infrastructure and other issues.

But as the 200th day of Trump’s first term in office came and went Monday, the president and Republican leaders on Capitol Hill found themselves far behind schedule, still searching for a major legislative victory and facing a difficult calendar when Congress returns in September.

At this point, tax reform represents the party’s best shot at securing a signature domestic policy achievement in Trump’s first year in office — a period of time when presidents traditionally have the most political capital to try and fulfill a few of their campaign promises.

“All the eggs are probably in the basket of tax reform,” said Donald Bryson, the North Carolina state director for Americans for Prosperity, the Koch Brothers-backed conservative organization. “Right now, in terms of the need for a legislative and political win, we’ve got to reform the tax code.”

At this point, tax reform represents the party’s best shot at securing a signature domestic policy achievement in Trump’s first year in office.

Repealing and replacing Obamacare was supposed to be the party’s first big win in the Trump era, but the plan had implications for tax reform as well.

The House health care bill, which passed in March, included roughly $800 billion in tax cuts. But the Senate’s last attempt at undoing the health care law — a “skinny” repeal bill that would have eliminated the medical device tax, while keeping the rest of the law’s taxes in place – was voted down in dramatic fashion last month.

As a result, Republicans will have to keep the health care taxes in place, unless they can find some way to offset the loss of revenue.

Finding savings to cover all of the tax cuts in the Republican plan will be an even bigger challenge.

Senate Republican leaders will likely use a parliamentary maneuver known as budget reconciliation to bypass Democrats and push through a tax reform package. Under the Senate’s rules, the bill cannot add to the federal deficit, a hurdle that will force Republicans to search for creative solutions in writing a revenue-neutral proposal. 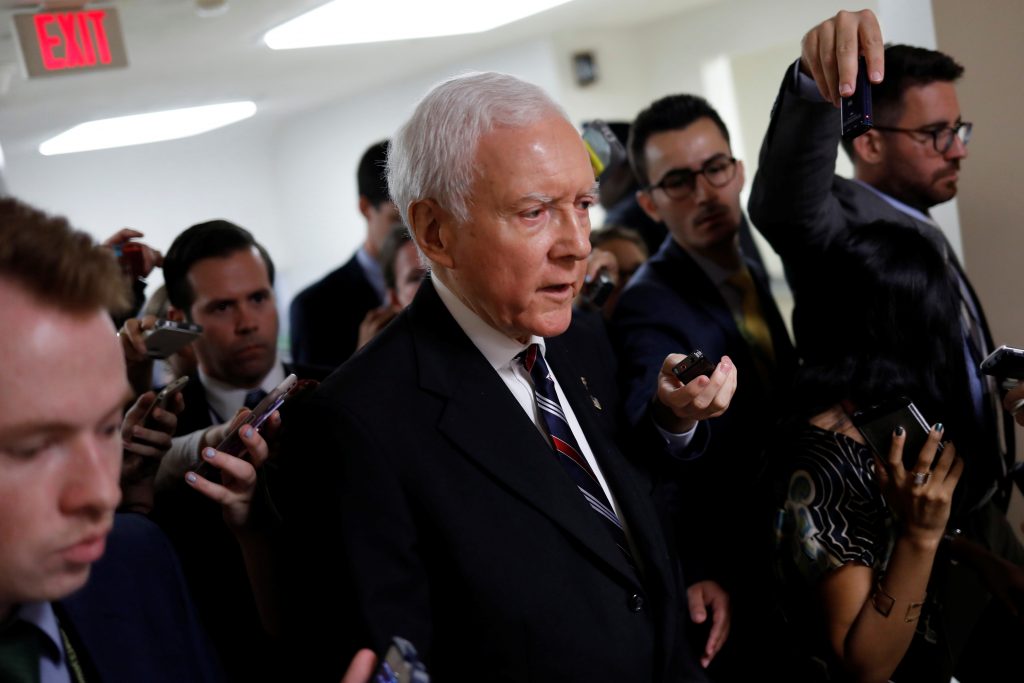 The plan centers on cutting individual and corporate tax rates “as much possible,” and rewriting the tax code to draw American businesses and jobs outside of the country back into the United States. Republicans have long argued that simplifying the tax system and lowering rates would spur economic growth.

“We are confident that a shared vision for tax reform exists, and are prepared for the two committees to take the lead and begin producing legislation for the President to sign,” the group said.

But in order to strike a deal, both sides will likely need to make some concessions.

As a candidate, Trump pledged to cut the corporate tax rate to 15 percent, from its current level of 35 percent, arguing that the change would discourage American companies from relocating overseas to countries with lower business taxes. Trump has reportedly backed the plan since taking office as well.

In an appearance on Fox and Friends last weekend, Hatch signaled that the proposal was too ambitious, though he said Republicans would try. “We’ll be lucky if we can get the corporate tax rate down to 20 percent, even 25 percent,” Hatch said.

Hatch, whose committee will draft the Senate tax proposal, also indicated that Congress would have difficulty passing a bill with the individual tax cuts Trump has pushed for. The White House released a one-page tax plan in April that called for reducing the current number of tax brackets from seven to three, with rates of 10, 25 and 35 percent. Currently, the highest tax rate is 39.6 percent.

The White House and Congressional Republican leaders have not given themselves much time to reach an agreement.

“If we could get to those rates, that would be miraculous,” Hatch told Fox.

Short told reporters that the White House expected the House to take up a tax bill in September, and pass it the following month. Short called for the Senate to approve its tax reform package in November, setting up a final vote for sometime in December. Short acknowledged that it was an “aggressive schedule, but that is our timetable.”

The timeline raised concerns on Capitol Hill, where Republican leaders have tried to present a united front with the White House on taxes. Short’s decision to lay out a detailed schedule in public was not helpful, a congressional aide said, because it boxed lawmakers in with specific dates that they may not be able to deliver.

A senior staffer for the House Ways and Means Committee, which will write the House tax bill, said the goal remained passing the legislation before the start of 2018.

Julia Lawless, the communications director for the Senate Finance Committee, said the details of the Senate tax plan would be negotiated in the fall, when lawmakers return from their August break.

“Chairman Hatch is focused on developing a tax reform package that will provide more relief to the middle class, increase wages and job growth here at home, and ensure American businesses can compete in global markets,” Lawless said. 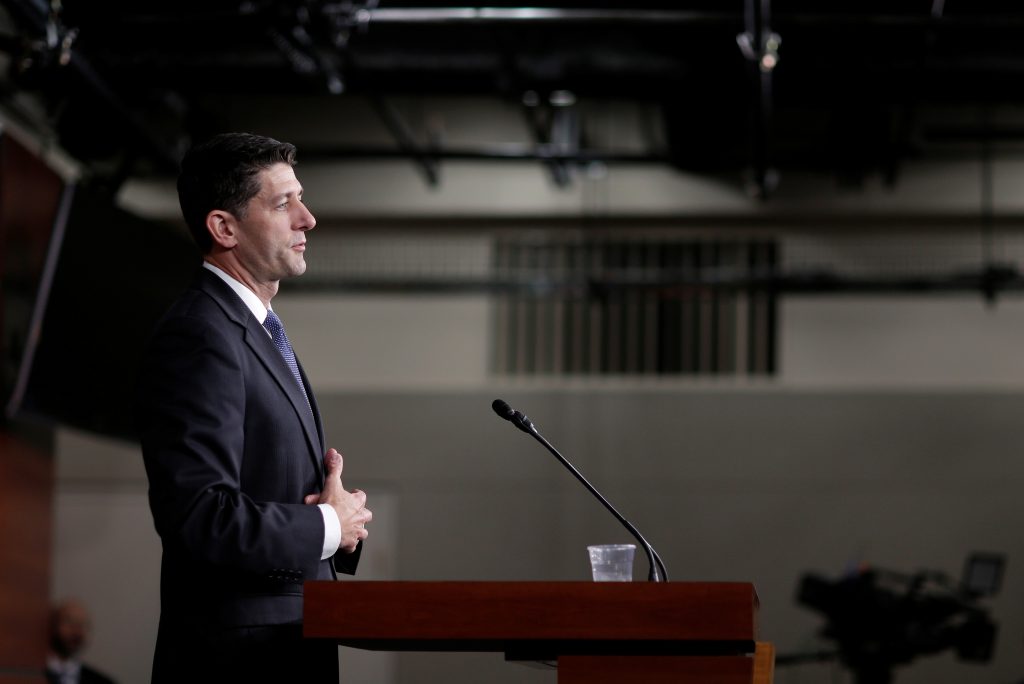 House Speaker Paul Ryan is part of a group of Congressional Republicans who are working with the White House on tax reform. File Photo by REUTERS/Joshua Roberts

The group of Republican leaders and White House officials working on tax reform have been meeting weekly for months in order to hammer out a broad plan. Their staffs have been communicating daily on the plan’s details.

The White House did not respond to a request for comment.

The White House has been more engaged in the tax deliberations, compared to its approach on health care. The administration has two top officials, in Cohn and Mnuchin, who are experienced business leaders, though neither one has a background in public policy.

In contrast, Trump did not enter office with an experienced health care policy team in place, which hampered the White House’s ability to work with Congress on rolling back the Affordable Care Act.

The health care law, like most major pieces of legislation, was a compromise. Mr. Obama and moderate Democrats viewed it as an important step toward widening access to coverage; the law’s liberal critics were disappointed that it fell short of the universal, single-payer system that many Democrats had dreamed of for decades.

Republicans face a similar quandary: settle for achieving some of their goals on tax reform, or allow the perfect to be the enemy of the good.

The party has sought a change to the tax code for years. Congress last passed a major tax reform in 1986, under President Ronald Reagan. The question now is, will Republicans be willing to compromise on the policy fine points in order to get something done on taxes?

A compromise on health care proved elusive, though Republicans could revive the effort in the future. The health care fiasco raised the stakes for tax reform, said Timothy Hagle, a political science professor at the University of Iowa.

“If the Senate can get itself together on tax reform, that could leave health care in the rear view mirror to some extent, but you can’t [move past it] entirely,” Hagle said.

Will Republicans be willing to compromise on the policy fine points in order to get something done on taxes?

Trump can still point to several areas where he delivered on his promises as an outsider candidate. The president pulled the United States out of the Paris climate accord, and instituted tougher immigration enforcement rules. The Senate confirmed Neil Gorsuch, his Supreme Court nominee.

So far, most of the focus on Trump has centered on the “sideshow, the incessant tweeting and offending one person or another, or behaving in some unorthodox or unpresidential way,” said Ellen Fitzpatrick, a historian at the University of New Hampshire who writes about presidential politics.

“I think most people are [only] dimly aware of the extent to which [the Trump administration has pushed] very conservative efforts to roll back regulations, to appoint very conservative justices to the courts, and to undo environmental policies that were years in the making,” Fitzpatrick said.

In May, Trump signed a bill to avoid a government shutdown and keep the federal bureaucracy running through the end of the fiscal year. The stopgap measure included a $21 billion increase in supplemental defense spending, fulfilling, at least in the short-term, Trump’s vow to beef up the military.

But the measure did not provide any border wall funding, a concession that Trump’s polarizing proposals don’t easily translate into actual policy. Trump’s proposal for a $1 trillion infrastructure package has also gone nowhere, sidelined by the months-long fight over health care, which in turn delayed legislative action on taxes.

When Congress returns next month, it must deal with several daunting tasks — including raising the debt ceiling and passing a budget — in addition to taking on tax reform. Looming above it all are the investigations into Russia’s interference in the 2016 election, and possible ties to the Trump campaign.

Presidential legacies are typically shaped by major domestic issues, Fitzpatrick said. Tax reform could help rescue Trump’s faltering legislative agenda, which makes the next few months critical for the president and Republicans in Congress. By the end of the year, the 2018 midterms will be right around the corner.

Left: President Donald Trump meets with Senate Majority Leader Mitch McConnell and Speaker of the House Paul Ryan during a meeting with Republican Congressional leaders at the White House on June 6, 2017. Photo by REUTERS/Joshua Roberts