President Donald Trump will reach the six-month mark of his presidency Thursday without having signed a single major piece of legislation into law. His controversial travel ban has been partially blocked by the courts, and Republicans in Congress have struggled, and so far failed, to repeal and replace the Affordable Care Act. The Russia story won’t go away.

But like many things in the age of “fake news” and “alternative facts,” Trump’s approval rating is up for debate. Trump questioned the accuracy of the ABC/Washington Post poll over the weekend, noting in a tweet that “almost 40% is not bad at this time.”

The comment was a classic Trumpism, at once untruthful and, as it pertains to his base, politically astute. In the history of modern polling, which began with the widespread adoption of the home telephone in the United States after World War II and Harry Truman’s presidency, no other president has held such a low approval rating through their first six months in office.

And yet, as Trump’s tweet suggested, things could be worse. Nearly four in 10 Americans still support him, despite his early stumbles on immigration and health care, his caustic social media presence and his uneven performance on the world stage. As Trump moves into the second half of his first year in office, it has become clear that his base isn’t budging, at least not yet.

When candidate Trump claimed at a campaign rally in January 2016 that he could shoot someone on Fifth Avenue in New York City and not lose voters, “he was speaking with a good understanding of what his base is about,” said Lee Miringoff, the director of the Marist Institute for Public Opinion. Eighteen months later, little has changed.

“His base isn’t deserting him,” Miringoff said.

Trump’s popularity could continue to slide, slowly, in the months to come. Polling shows that moderate Republicans and independents have started breaking with Trump over health care, the investigations into Russia’s ties to the Trump campaign, and his leadership abroad. Still, there are several factors working in Trump’s favor that could keep his approval rating from slipping much further.

There are several factors working in Trump’s favor that could keep his approval rating from slipping much further.

Trump’s approval rating will hinge on the economy more than any other issue, Miringoff said. When it comes to a president’s popularity, it “does all come back to the economy.”

At a press conference in February, soon after taking office, Trump claimed that he “inherited a mess at home.” Two weeks later, he painted a dire picture of the economy in his first address to a joint session of Congress.

But in fact Trump, who ran on a platform of reviving the U.S. economy, inherited a relatively stable economy from his predecessor. The unemployment rate the month Trump was sworn in was 4.8 percent, three points lower than it was when Barack Obama entered the White House in 2009. The unemployment rate has since dropped to 4.4 percent, according to the latest data from the Bureau of Labor Statistics.

In June, the Federal Reserve raised its benchmark interest rate for the fourth time since late 2015, the latest sign of the central bank’s confidence that the economy has recovered from the Great Recession.

The White House’s proposed budget, which was released earlier this year, projected that the economy would grow at an annual rate of three percent over the next decade.

Most economists do not share that view; the nonpartisan Committee for a Responsible Federal Budget estimated in a March report that the economy would grow by 1.9 percent annually over the next 10 years.

But barring an unforeseen downturn, voters could enter next year’s midterm elections feeling confident about their economic future, said Robert Shapiro, a political science professor and polling expert at Columbia University. “The economy is basically holding steady and improving in a lot of respects,” Shapiro said. 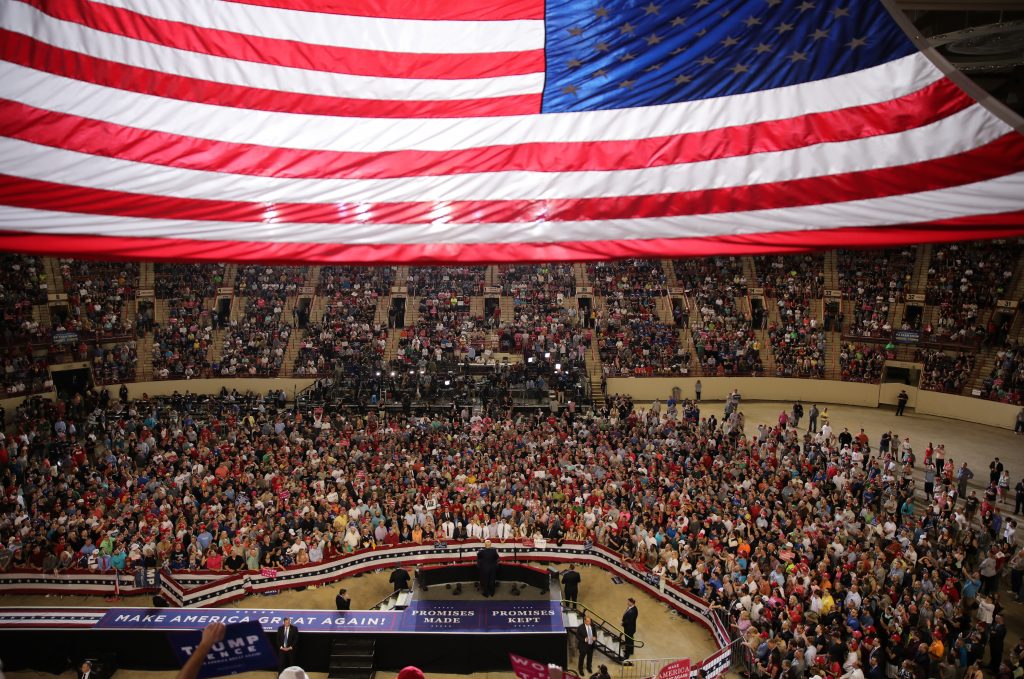 Trump can only benefit from Obama’s economy for so long, however. At some point, Shapiro said, voters will judge him based on his own record, and whether he delivered on his campaign promise to create jobs and bring back the manufacturing and coal industries.

“The big question is, will Trump’s supporters be disappointed if he can’t point to tangible things he promised to do,” Shapiro said.

As a candidate, Trump tapped into voter anger with Washington, claiming often that he would use the business acumen he honed in the private sector to run government more efficiently. But now that Trump is in office, “I think it is possible that if that anger continues, at some point it gets directed at him,” Perry said.

Trump is skilled at both dodging responsibility for his actions, and taking credit for other people’s achievements.

But Trump is skilled at both dodging responsibility for his actions, and taking credit for other people’s achievements, Perry added.

Trump displayed those skills on Tuesday, after Senate Republicans conceded that they don’t have enough votes to pass the GOP leadership’s health care bill. In a series of tweets, Trump blamed the breakdown on “all of the Democrats and a few Republicans,” and argued that the parties would “come together and do a great healthcare plan” in the future.

The statements stand in sharp contrast to the traditional notion in politics, which past presidents largely accepted, that the buck stops with the occupant of the Oval Office. Perry cited President Kennedy, who accepted responsibility for the failed U.S.-backed invasion of Cuba in 1961 during a press conference days after the Bay of Pigs fiasco.

After Kennedy “accepted responsibility for that disaster, his [favorable] poll ratings jumped” to over 80 percent, Perry said.

In 1983, after a terrorist attack killed 241 American marines in Lebanon, President Reagan said any blame for the deaths “properly rests here in this office and with this president. And I accept responsibility for the bad as well as the good.”

Trump, on the other hand, has not “taken responsibility for any of the failures or missteps” of his administration, Perry argued. But Trump has retained his core support so far, she said, because he “is a master of stating why he can’t get things done, and whether he’s stating it accurately or not doesn’t seem to matter to his base.” 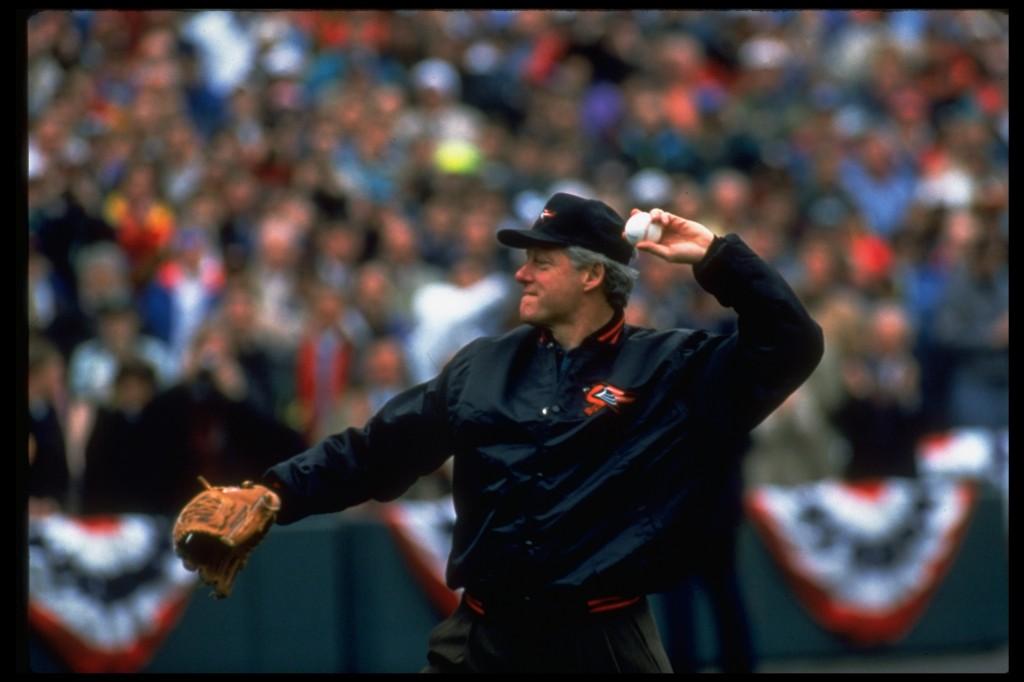 President Bill Clinton throwing out the first pitch at an Orioles game in 1996. Clinton suffered a setback in the midterms but won reelection and left office with high approval ratings. File photo by Scott Wachter//Time Life Pictures/Getty Images

Trump’s hold on a third of the electorate has as much to do with changes in American politics in recent decades — namely, the rise of polarization — as it does with his skills as a communicator, Shapiro said.

“In the past, when public support dropped off or increased for a president, [every part of the electorate] changed in the same direction at roughly the same rate,” Shapiro said. As public support for the Korean War waned, President Truman’s approval rating dropped among both Democrats and Republicans, Shapiro said.

“In recent years, you have less of that and you have partisan differences increasing,” he added. When Obama was in office, Democrats and some independents stuck by his side, just as most Republicans rallied around President George W. Bush.

Today, “Americans are not responding to information in the same way,” Shapiro added. “They have perceptual biases. People see what they want to see.”

If Trump sticks with his narrative that Democrats are obstructionists and the Russia probes are a political witch hunt, his approval rating a year from now could remain in roughly the same place that it is today.

And several historians and pollsters said that it could still go up. The most common example they gave was President Clinton, who won reelection two years after suffering a major setback in the 1994 midterm election, when Republicans gained control of the House for the first time in four decades. Clinton’s approval rating remained above 50 percent through his second term in office, even during the Monica Lewinsky scandal.

Danielle Vinson, a political science professor at Furman University, said Clinton benefited from his handling of the Oklahoma City bombing; the 1995 government shutdown, which many voters blamed on Republicans; and Kenneth Starr’s aggressive, years-long investigation into the White House.

“I remember the news coverage at the time,” Vinson recalled. “After the 1994 midterms, there was a lot of speculation that Clinton was going to be a one-term president. He not only was able to turn it around, but he also survived his own self-inflicted controversy.”

Two decades later, conventional wisdom holds that Democrats could make big gains in next year’s midterm election. Republicans pulled that feat off in 2010, using the Tea Party movement and the right’s opposition to Obama to win back the House.

Shapiro noted that Obama, like Clinton, managed to overcome a disastrous midterm election to win a second term in the White House. “By 2012, Obama’s popularity picked up, not enormously but enough for him to win reelection,” Shapiro said.

“It’s possible” that Trump’s approval rating could go up, he added. If Trump’s [favorability rating] “rises into the 40s, a year from now we’ll be having different conversation.”