Can Trump win the general election without minority voters?

ATLANTA — On Sunday, in an interview on national television, Donald Trump refused to denounce David Duke, a former leader of the Klu Klux Klan.

Two days later, the real estate developer moved one step closer to clinching the Republican nomination with a commanding performance in the Super Tuesday primaries yesterday.

How he handled the David Duke question added to a track record of controversial comments toward minorities, further weakening his already negligible support among non-white voters, and highlighting a critical question that has worried Republican Party leaders for months: can Trump win the general election with virtually no support from minority voters?

If Trump doesn’t start making inroads with minority voters soon it could spell trouble for him in a general election showdown against Hillary Clinton, the likely Democratic nominee.

Mitt Romney won just 17 percent of the nonwhite vote in 2012, and Republican Party strategists agree that this year’s GOP nominee needs to do significantly better to be competitive in November.

“Donald Trump is a clown,” Delores Walthall, 62, who is African-American, said in an interview after voting yesterday at a polling precinct near her home in College Park, a suburb just south of Atlanta.

Black voters who were interviewed for this story said they were alarmed by Trump’s rhetoric, and the bigotry that has bubbled up to the surface of American politics as a result of his campaign.

“I can’t understand it. At first I thought [his candidacy] was just a joke, something he was doing to be in the limelight,” she added. “But then people started backing him. I think it’s payback for having Obama as president.”

In interviews across South Carolina, Georgia and Alabama over the past week, dozens of black voters expressed a similar sense of frustration and anger with Trump, who has also made incendiary comments about Hispanics and Muslims.

Whites in the Deep South who voted for Trump were much more forgiving.

Some, like Brian Lamb, an operations manager at a stamping facility in Cusseta, Ala., said they disagreed with Trump’s inflammatory rhetoric, but it didn’t stop them from backing him at the polls. 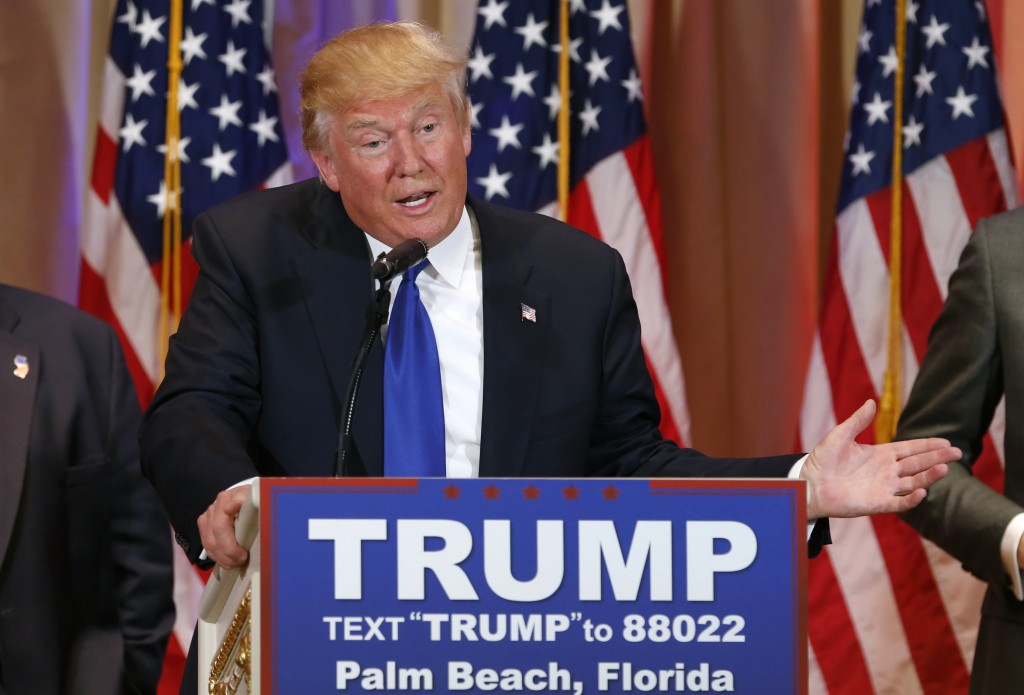 “I think he needs to watch what he says,” Lamb said at a poll location in Opelika. But he added, “We need somebody’s who’s not a career politician.”

For other whites, Trump’s views on race and ethnicity seemed to be a positive.

“I like Donald Trump because he tells the truth. We got a lot of folks jumping the border,” said Chandler Hazen, 19, an auto mechanic in Phenix City, Ala. Hazen said he wasn’t bothered by the controversy over Trump and the KKK. “Stuff like that ain’t going to change my vote.”

Bill Johnson, a retired farmer and crop insurance salesman from Lumpkin, Ga., linked his frustration with politics to the election of Barack Obama, a commonly held view among many Trump supporters in the South.

“What I’m going to tell you has nothing to do with color. I’m not a racist, but the blacks have taken over this country,” Johnson, 89, said in an interview yesterday outside of the polling precinct in Lumpkin. “Obama was put in office by someone to ruin our credibility.”

Johnson would not say whom he planned to vote for, but he praised Trump at length before stepping inside the Stewart County Courthouse to cast his ballot.

“I like Trump,” Johnson said. “He’s the only one who ain’t already bought off.” He added, “He’s a very smart man. He inherited millions, and he made it into billions.”

Black voters who were interviewed for this story said they were alarmed by Trump’s rhetoric, and the bigotry that has bubbled up to the surface of American politics as a result of his campaign.

“Their theme is, take our country back,” Regina McKnight, a retired county administrator in Kingstree, S.C., said of Trump and his top Republican rivals. “But the way I see it, they mean take it back from an African-American and put it back in white hands.”

Lincoln Glover, 18, said there was no way Trump could win over blacks and other minority voters in the general election. “How does he expect us to vote for him?” said Glover, who lives in Orangeburg, S.C. “We’re not dumb.”

Many anti-Trump Republicans said they recognized that he would face significant opposition from minority voters in the general election.

“I’m definitely worried” that nominating Trump could hurt the party, said Anna Nolan, a school teacher in east-central Alabama who voted for Senator Ted Cruz. Nolan, who is white, said she was appalled by Trump’s slow response to the KKK comment. “That was a big issue for me.”

Other white Republicans said they believed that Trump was already responsible for hurting race relations in the country, regardless of what happens in the election in the months to come.

“If the KKK stuff didn’t get everybody’s attention and make people vote against Trump, I don’t know [what will]. I just don’t know,” said Sybil Ammons, the coroner of Stewart County in Georgia. “I want to see us bond as a country and he’s not going to help that at all.”

Left: If Trump doesn’t start making inroads with minority voters, it could spell trouble for him in a general election showdown against Hillary Clinton. Photo by Aaron Josefczyk/Reuters