Can you chip in a dollar? 2020 Democrats race for small donors

Barack Obama was still a long-shot White House contender in the early spring of 2007, when the then-senator’s fledgling campaign announced it had raised $25.8 million in first-quarter donations. But the huge sum, from what the campaign called “104,000 grassroots donors,” was an early sign — long before his surprise Iowa win — that Obama had a real shot at the Democratic presidential nomination.

Today, the Obama campaign’s announcement, made 12 years ago this month, can be traced to a seismic shift in political fundraising, one that puts greater value on grassroots donors who contribute small sums — often $50 or less. And in the last few years in particular, Democrats — led by figures like Vermont Sen. Bernie Sanders — are rejecting corporate PAC money altogether, seizing instead on small dollar donations in a race to the bottom to see who can claim the smallest average donation.

Sanders made his average $27 donation a rallying cry during in his 2016 presidential campaign. Now, in the first crowded, wide-open Democratic primary since 2008, the Sanders campaign said 525,000 donors contributed to the campaign in the first quarter of 2019. And his campaign isn’t the only one focusing on this group.

2020 Democrats are in a race to the bottom to see who can claim the smallest average donation.

In the early days of the 2020 cycle, several Democratic candidates, including Sanders and former congressman Beto O’Rourke, are putting this new strategy to the test, betting that small donors can fuel successful primary campaigns. Nearly every declared 2020 Democrat angling to take on President Donald Trump next year is doing so without the backing of Super Political Action Committees, corporate PACs, and, in some cases, other special interest groups as well.

“For a very long time there was conventional wisdom that you could not raise enough to run a large scale campaign with small dollar donors,” said Tara McGowan, the CEO of the digital strategy group Acronym. “Bernie Sanders and other candidates like Beto O’Rourke have changed that narrative.”

Supporters of the strategy point to a successful 2018 midterm cycle, when a record number of candidates running for seats in the House of Representatives refused corporate PAC money. In total, 58 of those candidates won their races — including 36 House challengers — according to Patrick Burgwinkle, the communications director for End Citizens United, a political action committee focused on campaign finance reform.

“Every Democrat running for president has decided not to take corporate PAC money,” Burgwinkle said. “I think that sends a really strong message to voters about whose interests they would represent as president United States.”

In many ways, focusing on small donors represents a natural move for candidates seeking to win the hearts and wallets of the Democratic Party’s increasingly anti-Wall Street base. The strategy has gained traction on the left especially after the Supreme Court’s 2010 Citizens United ruling. The decision loosened regulations on corporate and union campaign contributions and gave rise to super PACs, sparking a backlash from Democrats and campaign finance reform groups.

In recent years, many rank-and-file Democrats have shifted left on economic issues like raising the minimum wage and prioritized fighting income inequality. Lawmakers in Congress have followed suit by adopting populist messaging and legislation, including bills introduced this year by House Democrats to raise the federal minimum wage. For presidential candidates on the left, seeking donations from big banks and other powerful interests can become a major political liability. 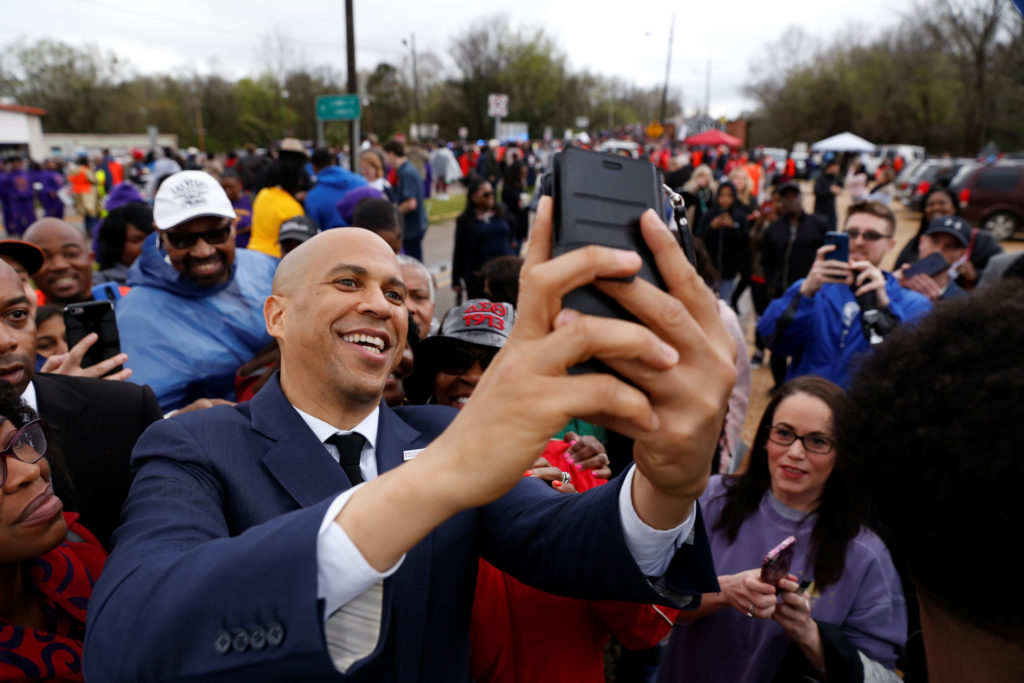 Cory Booker’s campaign has sent out fundraising emails asking for as little as $3 in donations, part of a strategy to build grassroots support. File photo by REUTERS/Chris Aluka Berry

The dynamic isn’t entirely new. In 2016, Sanders criticized Clinton for accepting donations from big banks and earning millions in Wall Street speaking fees.The attacks succeeding in fueling a perception that Clinton was an elite Washington insider out of touch with ordinary Americans.

Recognizing this new reality, some candidates, like New York Sen. Kirsten Gillibrand — who has also faced criticism for her Wall Street ties — and South Bend Mayor Pete Buttigieg have gone a step further by also refusing any donations from fossil fuel companies, in addition to foregoing donations from corporate super PACs. Gillibrand and Buttigieg have argued that fossil fuel companies do not align with their positions on combating climate change, another top issue for Democratic voters in 2020. Buttigieg is also refusing money from federal lobbyists; last week his campaign announced that it would refund more than $30,000 in donations from lobbyists.

Meanwhile, Massachusetts Sen. Elizabeth Warren has gone a step further still, by refusing to hold high-dollar fundraisers, or scheduling “call time,” with wealthy potential donors. The campaign pulled in $6 million in the first quarter of 2019, according to the latest FEC filings — a decent haul but one that still puts her in fifth place for first quarter fundraising in the 2020 Democratic field.

Washington State Gov. Jay Inslee is the only Democratic candidate in the race with a Super PAC supporting his candidacy. Act Now Climate, which was started to build support for Inslee’s candidacy, has spent hundreds of thousands of dollars on digital advertising to support Inslee’s climate change-centric campaign.

Former Vice President Joe Biden is tapping into a deep-pocketed donor network to bankroll his third presidential bid. But Biden also appears aware of how much has changed since his previous White House runs in 1988 and 2008. Biden reportedly told donors his candidacy would be judged out of the gate by how much he raised in the first 24 hours after he announced his bid, not by his polls numbers in early-voting states.

Biden ultimately raised $6.3 million in his first day, the most of anyone in the 20-person Democratic primary field.

Changing technology has also played an important role in the growing small donor arms race for both parties.

Changing technology has also played an important role in the growing small donor arms race for both parties. The Trump campaign invested heavily in digital advertising in the 2016 race and has continued building grassroots support online after the president took office. On the left, small online donations have been a core part of Democratic fundraising since at least 2004. But there has been a significant uptick in recent election cycles, said Erin Hill the executive director for ActBlue, the main online donation database used by Democrats.

The number of donors to the site giving less than $200 “have doubled since 2012,” Hill said. “It’s not something that happened overnight.”

Part of that rise is the result of campaigns investing in building huge email lists that can reach inboxes across the country. Several 2020 candidates have blasted their lists with near-daily fundraising emails, asking for just a few dollars to meet a seemingly never-ending parade of fundraising deadlines. 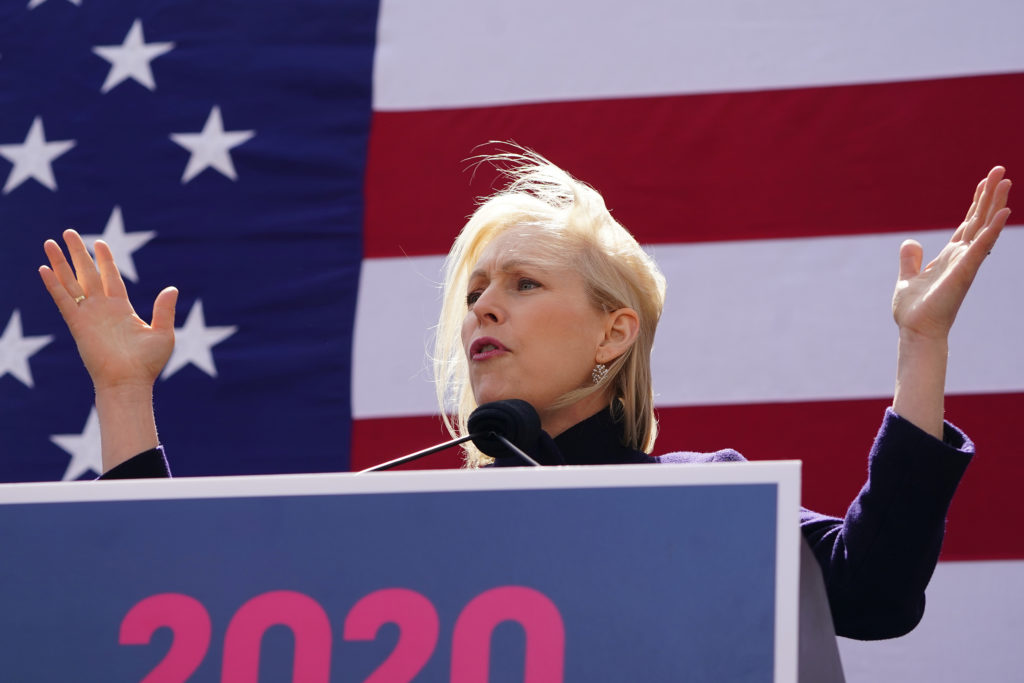 Friendly, informal emails asking for small donations can help candidates connect directly with voters and stand out in a crowded primary field, McGowan said. “Too often campaigns can treat supporters as an ATM machine, and with such a crowded bench I think it is pushing campaigns to be more creative.”

The 2020 emphasis on small-dollar donations is also in part a reaction to new rules the Democratic National Committee established to determine how candidates qualify for the primary debate stage.

To qualify for the debates, candidates must receive donations from 65,000 individuals from 20 different states, or receive at least 1 percent in three different national or early-state polls. When he announced the rules earlier this year, DNC Chairman Tom Perez said the donation criteria were intended to encourage candidates to engage with the party’s grassroots.

The rules have made it possible for a political newcomer like entrepreneur Andrew Yang to qualify for the first two primary debates, while forcing other more experience candidates to scramble. Julian Castro, a former San Antonio mayor and Obama administration Cabinet official, emailed supporters in late-April urging them to give a few dollars because he’s still several thousand donors short of making the debate stage based on the donor criteria.

Political strategists argued that small donors also make politicians more accountable to their constituents. Instead of being seen cozying up to deep-pocketed supporters, McGowan, said, candidates who focus on small donors help those supporters feel as if they have “a piece of ownership over the campaign.”

“[Donors] are primed to take other actions on behalf of the campaign,” she added, once they’ve chipped in even a small amount. That could be anything from sharing an article about the candidate on social media to volunteering for the campaign, she said.

It’s too early to tell whether the approach will work this cycle. Democrats face a formidable general election fight against Trump, whose haul for the first quarter was is nearly twice as much as Sanders’, the Democratic frontrunner for fundraising in that same period.

Adding to the challenge, the president has not rejected support from wealthy donors or taken a stance against Super PACs, giving his campaign and its allies access to a steady source of campaign cash as as the 2020 election creeps closer.

For now, Trump’s numbers aren’t making Democrats sweat. Much of the the party’s success in the midterms was driven by grassroots enthusiasm, and “there’s no sign that that sort of energy has abated,” said Burgwinkle of End Citizens United.

Unlike in 2018, “Trump is actually on the ballot” in 2020, Burgwinkle said. “So I don’t really see why their enthusiasm would diminish.”

Left: Beto O'Rourke and other 2020 Democratic presidential candidates have made courting small donors a central part of their campaign strategies. Photo by REUTERS/Lucy Nicholson