Chief of staff Kelly: Trump backed away from wall months ago

WASHINGTON — President Donald Trump long ago backed away from his campaign pledge to construct a wall along the U.S.-Mexico border, his outgoing chief of staff said, as the president’s demand for “border security” funding triggered a partial government shutdown with no end in sight.

John Kelly, who will leave his post Wednesday after a tumultuous 17 months in the job, said in an exit interview with the Los Angeles Times that Trump abandoned the notion of “a solid concrete wall early on in the administration.” It marked the starkest admission yet by the president’s inner circle that his signature campaign pledge, which sparked fervent chants of “build that wall” during Trump’s rallies and is now at the center of a budgetary standoff, would not be fulfilled as advertised.

“To be honest, it’s not a wall,” Kelly said, adding the mix of technological enhancements and “steel slat” barriers the president now wants along the border resulted from conversations with law enforcement professionals.

The partial shutdown began Dec. 22 after Trump bowed to conservative demands that he fight to make good on his vow and secure funding for the wall before Republicans lose control of the House on Wednesday. Democrats have remained committed to blocking the president’s priority, and with neither side engaging in substantive negotiation, the effect of the partial shutdown was set to spread and to extend into the new year. 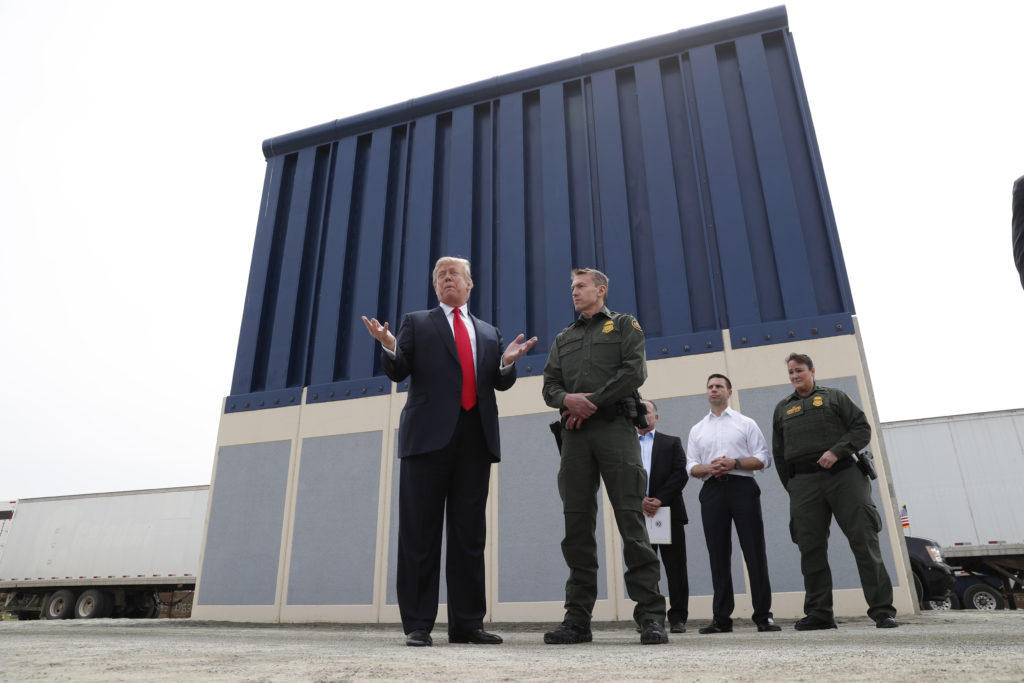 In August 2015 during his presidential campaign, Trump made his expectations for the border explicitly clear, as he parried criticism from rival Jeb Bush, the former Florida governor.

“Jeb Bush just talked about my border proposal to build a ‘fence,'” he tweeted. “It’s not a fence, Jeb, it’s a WALL, and there’s a BIG difference!”

“There may be a wall in some places, there may be steel slats, there may be technological enhancements,” Conway told “Fox News Sunday.” ”But only saying ‘wall or no wall’ is being very disingenuous and turning a complete blind eye to what is a crisis at the border.”

Meanwhile, neither side appeared ready to budge off its negotiating position. The two sides have had little direct contact during the stalemate, and Trump did not ask Republicans, who hold a monopoly on power in Washington until Thursday, to keep Congress in session.

Talks have been at a stalemate for more than a week, after Democrats said the White House offered to accept $2.5 billion for border security. Senate Democratic leader Chuck Schumer told Vice President Mike Pence that it wasn’t acceptable, nor was it guaranteed that Trump, under intense pressure from his conservative base to fulfill his signature campaign promise, would settle for that amount.

Conway claimed Sunday that “the president has already compromised” by dropping his request for the wall from $25 billion, and she called on Democrats to return to the negotiating table.

“It is with them,” she said, explaining why Trump was not reaching out to Democrats.

Democrats maintain that they have already presented the White House with three options to end the shutdown, none of which fund the wall, and insist that it’s Trump’s move.

“At this point, it’s clear the White House doesn’t know what they want when it comes to border security,” said Justin Goodman, Schumer’s spokesman. “While one White House official says they’re willing to compromise, another says the president is holding firm at no less than $5 billion for the wall. Meanwhile, the president tweets blaming everyone but himself for a shutdown he called for more than 25 times.”

After canceling a vacation to his private Florida club, Trump spent the weekend at the White House. He has remained out of the public eye since returning early Thursday from a 29-hour trip to visit U.S. troops in Iraq, instead taking to Twitter to attack Democrats. He also moved to defend himself from criticism that he couldn’t deliver on the wall while the GOP controlled both the House and Senate.

“For those that naively ask why didn’t the Republicans get approval to build the Wall over the last year, it is because IN THE SENATE WE NEED 10 DEMOCRAT VOTES, and they will gives us “NONE” for Border Security!,” he tweeted. “Now we have to do it the hard way, with a Shutdown.”

Trump had lunch Sunday with Republican South Carolina Sen. Lindsey Graham, who said he hoped to end the shutdown by offering Democrats incentives to get them to vote for wall funding.

“To my Democratic friends, there will never be a deal without wall funding,” Graham said on CNN before the meeting with the president.

Graham proposed to help two groups of immigrants get approval to continue living in the U.S: about 700,000 young “Dreamers” brought into the U.S. illegally as children and about 400,000 people receiving temporary protected status because they are from countries struggling with natural disasters or armed conflicts. He also said the compromise should include changes in federal law to discourage people from trying to enter the U.S. illegally.

“Democrats have a chance here to work with me and others, including the president, to bring legal status to people who have very uncertain lives,” Graham said.

After meeting with the president, Graham said Trump was “open-minded” about a broader immigration agreement, saying the impasse presented an opportunity to address issues beyond the border wall. But a previous attempt to reach a compromise that addressed the status of Dreamers broke down last year as a result of escalating White House demands.

As he called for Democrats to negotiate, Trump brushed off criticism that his administration bore any responsibility for the recent deaths of two migrant children in Border Patrol custody. Trump claimed the deaths were “strictly the fault of the Democrats and their pathetic immigration policies that allow people to make the long trek thinking they can enter our country illegally.” His comments on Twitter came as his Homeland Security secretary met with medical professionals and ordered policy changes meant to better protect children detained at the border.

Trump earlier had upped the brinkmanship by threatening anew to close the border with Mexico to press Congress to cave to his demand for money to pay for a wall. Democrats are vowing to pass legislation restoring the government as soon as they take control of the House on Thursday, but that won’t accomplish anything unless Trump and the Republican-controlled Senate go along with it.

The shutdown is forcing hundreds of thousands of federal workers and contractors to stay home or work without pay.