NEW YORK — Powered by a solid triumph in California, Hillary Clinton declared victory in her yearlong battle for the heart of the Democratic Party, seizing her place in history and setting out on the difficult task of fusing a fractured party to confront Donald Trump.

Clinton cruised to easy victories in four of the six state contests Tuesday. With each win she further solidified Sen. Bernie Sanders’ defeat and dashed his already slim chances of using the last night of state contests to refuel his flagging bid.

The victories allowed Clinton to celebrate her long-sought “milestone” — the first woman poised to lead a major political party’s presidential ticket. Standing before a flag-waving crowd in Brooklyn, the former secretary of state soaked up the cheers and beamed.

“Barriers can come down. Justice and equality can win,” she said. “This campaign is about making sure there are no ceilings, no limits on any of us. This is our moment to come together.”

Clinton had already secured the delegates needed for the nomination before Tuesday’s contests, according to an Associated Press tally. Still, Sanders had hoped to use a victory in California to persuade party insiders to switch their allegiances. Sanders picked up wins in Montana and North Dakota, but Clinton won substantially in California. 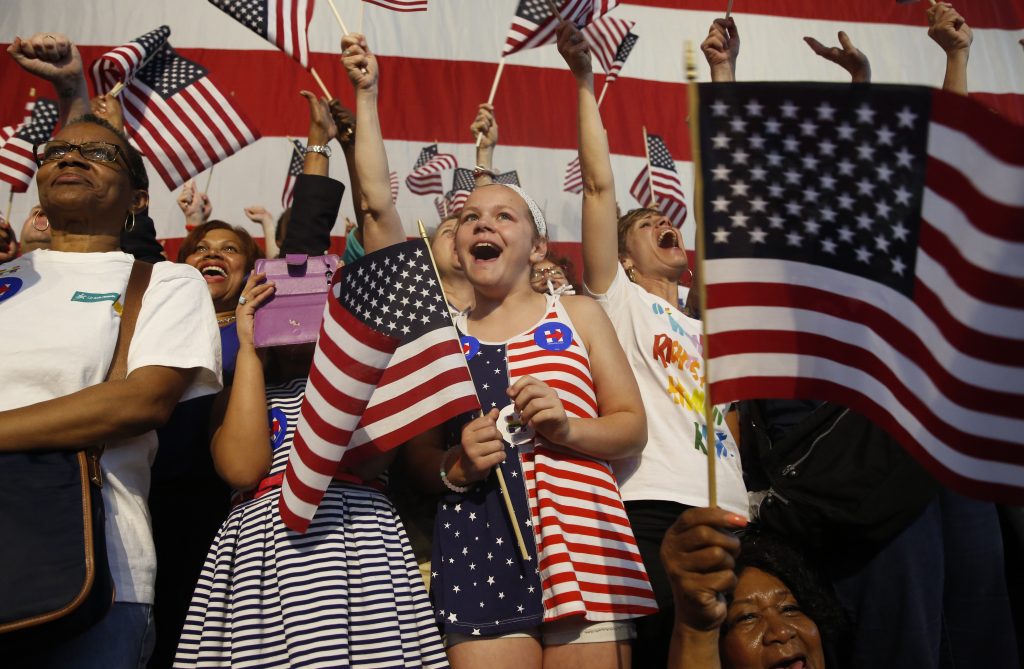 Sanders nonetheless vowed to continue to his campaign to the last contest in the District of Columbia next Tuesday.

“The struggle continues,” he said.

Clinton’s victory in California assured her a majority of pledged delegates — those chosen in primaries and caucuses. That’s notable because Sanders has argued that his White House bid remained viable as long as he stood a chance of winning a majority of those delegates. He would have needed a landslide Tuesday to reach that goal.

Sanders is under intense pressure from top Democrats hoping to coax him gently out of the race, win over his voters and turn to the task of challenging Trump.

Despite the pledge to soldier on, there were signs Sanders was listening. In his typically passionate remarks, the socialist firebrand repeatedly noted “we are in this together” and argued that a tenet of his campaign was that “we will not allow right-wing Republicans to control our government.”

Sanders said he called Clinton to congratulate her on the victories.

The senator planned to return home to Vermont on Wednesday, before coming to Washington Thursday for meetings and a campaign rally. 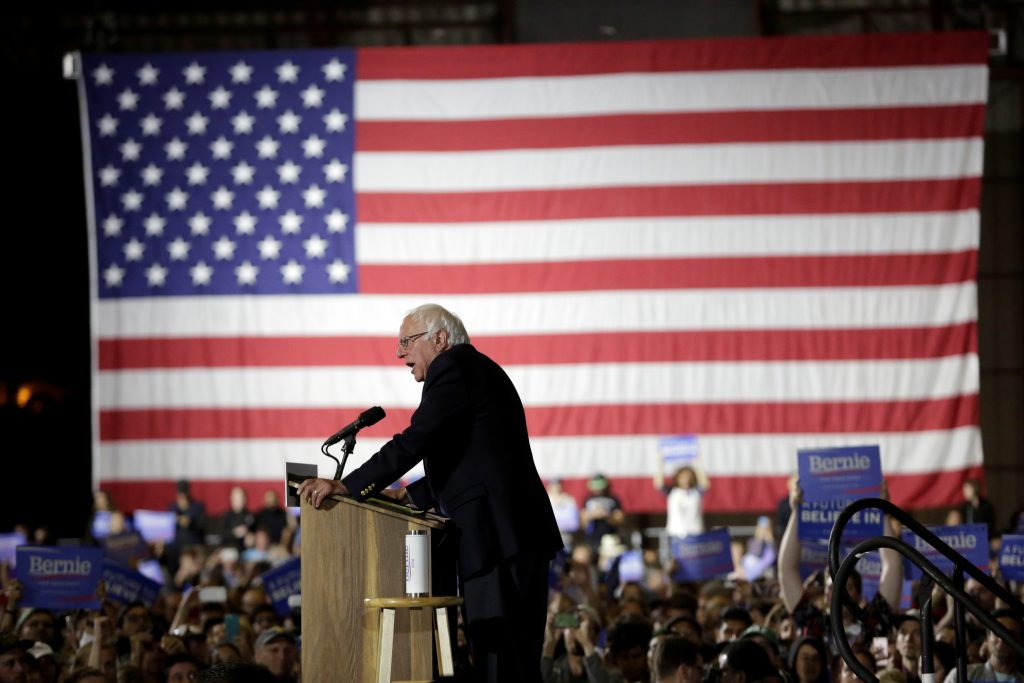 Sanders is downsizing his campaign. About half the staff is being laid off with most of the jobs involving field staff and advance aides, according to two people familiar with the plans. They spoke on condition of anonymity because they weren’t authorized to speak publicly about the layoffs. Campaign officials declined comment.

President Barack Obama called both Sanders and Clinton late Tuesday, congratulating both on their campaigns. The White House said Sanders and Obama would meet Thursday, at Sanders’ request, to discuss “how to build on the extraordinary work he has done to engage millions of Democratic voters, and to build on that enthusiasm.”

Clinton and Sanders are also expected to connect in the coming days, Clinton’s spokesman said late Tuesday. Their campaign managers spoke earlier in the day, signaling that conversations were underway about the road ahead.

As the Democratic race was wrapping up, Republicans were unraveling anew. Despite handily winning GOP contests in California, New Jersey, New Mexico, South Dakota and Montana, presumptive nominee Trump was in damage control mode over his race-based attacks on a Hispanic judge that had party leaders in fits. After one senator rescinded his endorsement and House Speaker Paul Ryan called the comments “racist,” Trump sought to calm worries with a rare, scripted victory speech.

“I understand the responsibility of carrying the mantle and I will never, ever let you down – too much work, too many people, blood, sweat and tears,” Trump said, reading from a teleprompter at a rally at one of his golf courses in suburban New York City. “I will make you proud of your party and our movement, and that’s what it is, is a movement.”

Trump went on to preview what Clinton has ahead of her: He blasted her as the defender of a “rigged” political system. He promised to deliver a longer speech on the Clintons “probably Monday.”

In her remarks, Clinton was similarly hard-edged, saying Trump was “temperamentally unfit to be commander in chief.” 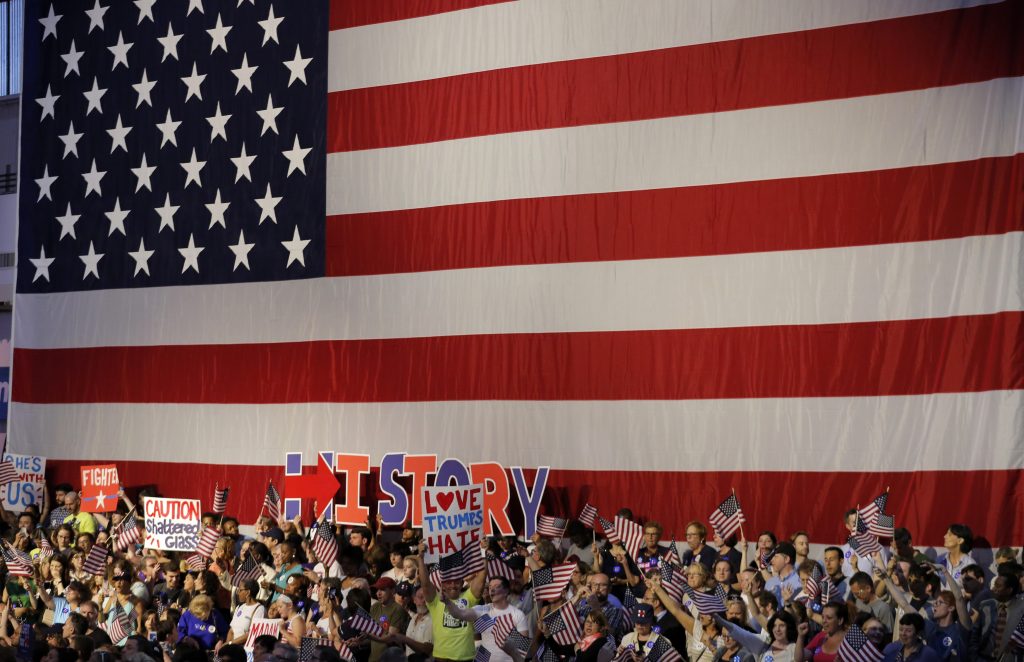 When including superdelegates, or party officials who can back any candidate, Clinton’s lead is much bigger — 2,755 to Sanders’ 1,852.

When including superdelegates, or party officials who can back any candidate, Clinton’s lead is much bigger — 2,755 to Sanders’ 1,852.

It takes 2,383 to win. Clinton crossed that threshold Monday, according to the AP tally

Sanders and some in his army of die-hard supporters expressed frustration about the survey. As he addressed supporters in Los Angeles, the crowd chanted “Media is corrupt.”

Both Clinton and Trump made overtures toward an energized and passionate pool of voters. Trump noted he and Sanders both oppose the president’s Pacific Rim trade deal, and he sympathized with frustration for having “been left out in the cold by a rigged system of super delegates.”

Clinton thanked the senator for driving the debate over economic mobility and income inequality and tried to show she absorbed some of his message. Mostly, she expressed empathy of a candidate who knows the bitter taste of defeat.

“It never feels good to put our heart into a cause or a candidate you believe in and come up short,” she said. “I know that feeling well. But as we look ahead to the battle that awaits, let’s remember all that unites us.”

But for Clinton, the night was largely about marking the moment.

Her campaign produced a video to introduce her speech, chronicling women’s rise in politics from the suffragettes through Clinton’s concession to speech to then-Sen. Barack Obama, eight years ago Tuesday when she thanked supporters for helping her put “18 million cracks” in the “highest, hardest glass ceiling.”