LOS ANGELES — Donald Trump has won the Republican presidential primary in California, the biggest prize in his triumphant run to become the GOP nominee.

Trump will now go on to the national convention in July with more than enough delegates to become the official nominee, but his candidacy remains a source of controversy, with many in the GOP struggling to rally behind the brash billionaire.

Trump was conciliatory at his victory rally, saying he understands “the responsibility” of leading the Republican Party. He also made a direct appeal to dejected Sanders supporters and other Democrats.

“This election isn’t about Republican or Democrat, it’s about who runs this country: the special interests or the people,” he said.

Already the presumptive Democratic nominee, Hillary Clinton sailed to victory in Tuesday’s primary in New Jersey, one of six states voting across the country. Rival Bernie Sanders hoped a strong showing in California, the night’s biggest prize, would raise doubts about Clinton’s historic achievement and spur superdelegate to rally around him instead.

Clinton’s win in New Jersey came a day after she secured the 2,383 delegates she needed to become first female presumptive nominee of a major political party, according to an Associated Press tally. Her total includes pledged delegates won in primaries and caucuses, as well as superdelegates — the party officials and officeholders who can back a candidate of their choosing.

“To every little girl who dreams big: Yes, you can be anything you want_even president. Tonight is for you,” Clinton wrote on Twitter shortly after she won New Jersey.

“We are at the brink of a historic, historic unprecedented moment,” she said during a rally in California on Monday.

Clinton and Sanders were both pressing for victory in California, each eager to effectively end their primary battle on a high note. However, the California results might not be known Tuesday night; more than half of Californians vote by mail, and the deadline for returned ballots isn’t until Friday, as long as they are postmarked by Election Day.

Sanders picked up a win in North Dakota, where a handful of delegates were up for grabs. Montana was also holding a primary Tuesday.

Clinton was waiting until most of the voting was complete before fully reveling in becoming the first woman nominated by a major U.S. political party. She was to address supporters at a victory party in Brooklyn, where her campaign planned to run a gauzy video highlighting the achievements of women who helped clear a path.

Still, she was wasting no time moving toward the general election. Her campaign announced that she would make stops next week in Ohio and Pennsylvania, states that will be pivotal in November.

Sanders hoped a victory would help in his so-far-unsuccessful bid to get Clinton superdelegates to switch their support. Asked on NBC whether he was continuing that effort, he said, “We are. We’re on the phone right now.”

The superdelegates who were counted in Clinton’s total told the AP they were unequivocally supporting her.

Trump, after vanquishing his last opponents about a month ago, has continued to make controversial statements, frustrating party leaders.

The latest cause for GOP concern was his insistence that a judge handling a legal case involving the businessman was being unfair in his rulings. Trump has said U.S. District Judge Gonzalo Curiel can’t be impartial because the jurist’s parents were born in Mexico and Trump wants to build a wall along the border.

Illinois Sen. Mark Kirk, who is locked in a close re-election fight, became the first lawmaker to pull his endorsement of Trump. House Speaker Paul Ryan said the businessman’s assertion was the “textbook definition of a racist comment” but he would continue to support Trump.

Trump released a statement saying he does “not feel one’s heritage makes them incapable of being impartial.” But he still questioned whether he was receiving fair treatment in the case involving the now-defunct Trump University.

If some Republicans harbored hopes of edging Trump off the Republican ticket at the party convention, that was dashed in Tuesday’s uncontested GOP primaries. Trump ended the night with enough delegates who are required by party rules to vote for him, whatever their personal views.

His shaky support among Republicans stands in stark contrast to the Democratic leaders mobilizing behind Clinton.

The former secretary of state, first lady and senator secured support Tuesday from House Minority Leader Nancy Pelosi, who represents a California district. And Clinton will soon have help on the campaign trail from President Barack Obama. Her 2008 foe is to endorse her as early as this week, a move meant to signal to Sanders and his supporters that it’s time to unify behind her. 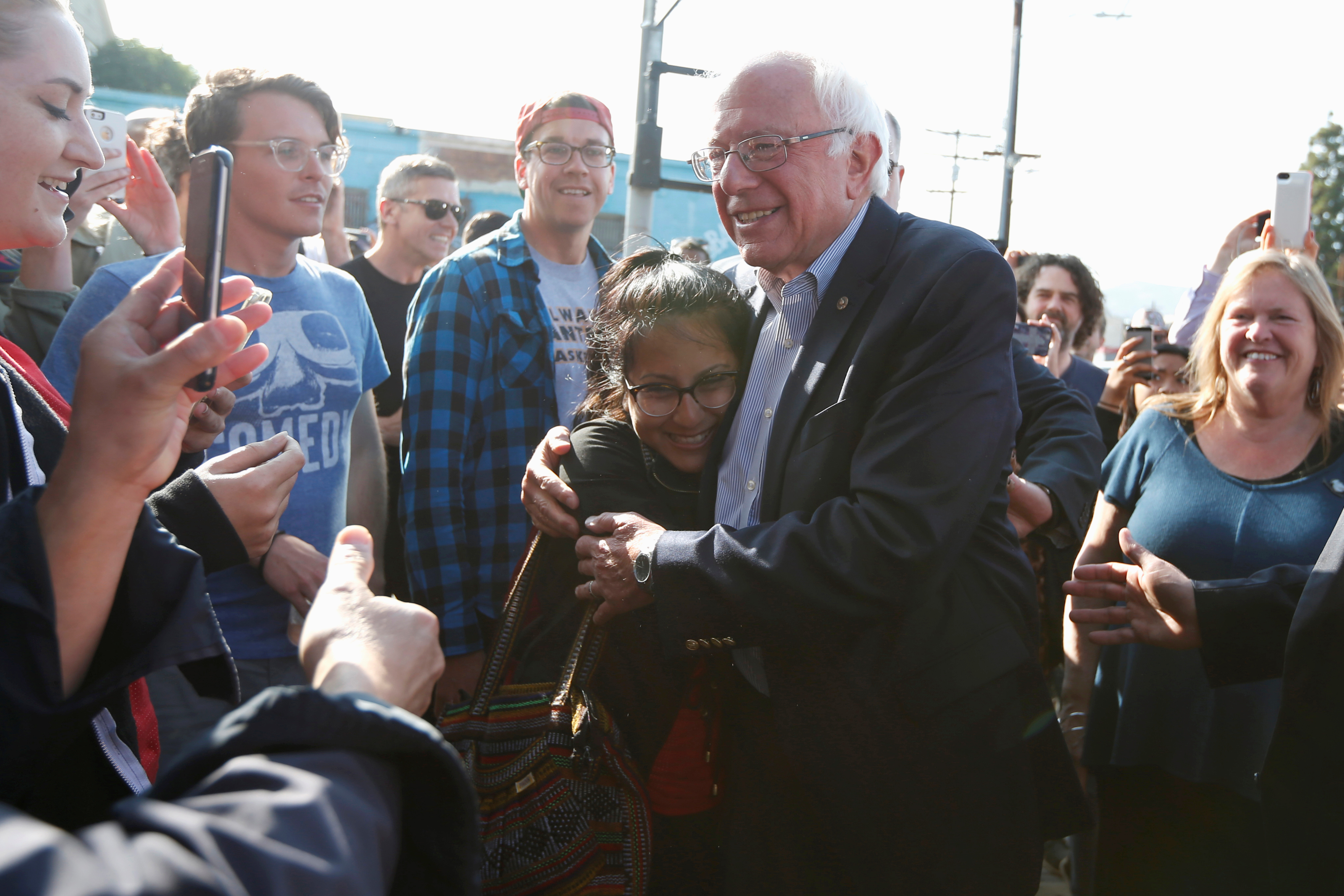 Obama and Sanders spoke by phone Sunday. While the content of the call is unknown, Sanders’ campaign has appeared to slightly soften its rhetoric since the call.

Dianne Feinstein of California said Sanders and Clinton should “march on to a general election together,” and any Sanders plan to keep fighting until the Democratic National Convention “is going to make that much more difficult.”

Sen. Claire McCaskill, D-Mo., said that for Sanders “I think the math is unforgiving.”

Sanders’ achievements have been remarkable for a candidate who was unknown to most Americans before the campaign. He has drawn massive crowds to rallies around the country and built a fundraising juggernaut based largely on small donations online. The Vermont senator has been particularly popular with young voters, an important piece of the Democratic coalition.

Still, Clinton’s victory has been broadly decisive. She leads Sanders by more than 3 million cast votes.

After her win in New Jersey, Clinton had 2,441 delegates to Sanders’ 1,616. That count includes both pledged delegates and superdelegates.