What is collusion, and how do you prove it?

President Donald Trump lashed out this week in response to news that the special counsel investigation into Russia’s interference in the 2016 election had widened to include an inquiry into his possible attempt to obstruct justice.

“They made up a phony collusion with the Russians story, found zero proof, so now they go for obstruction of justice on the phony story. Nice,” Mr. Trump wrote on Twitter on Thursday.

There is no sign, however, that the inquiry into collusion between Russia and the Trump campaign is off the table. To the contrary, Robert Mueller, the special counsel, has assembled a legal “dream team” whose members have expertise investigating a broad range of illegal acts that fall under the general rubric of collusion.

But unlike obstruction of justice — which is clearly defined in the United States Code — there is no specific statute for collusion. Acts of collusion span the legal gamut, and include campaign finance violations, conspiracy, bribery, and fraud.

For investigators in the Trump-Russia probe, “the initial problem is, what’s collusion?” said John Hueston, a former assistant U.S. attorney who served as the lead prosecutor for the Enron trial. “It’s just a very broad, ambiguous term.”

In searching for evidence of collusion, investigators will need to decide which areas of the law to focus on, said Nate Persily, a constitutional law expert at Stanford University.

“People have been analyzing this as a national security issue, with the relevant laws being ones that deal with treason, espionage, or other related crimes,” Persily said. But the rules governing campaign finance in the U.S. could prove to be the best starting point, he said.

Acts of collusion span the legal gamut, and include campaign finance violations, conspiracy, bribery, and fraud.

Federal Election Commission rules prohibit foreigners and foreign governments from spending money to influence American elections. The law works both ways: it’s also illegal for campaigns to accept financial contributions from individuals who are not U.S. citizens or permanent residents, or from any foreign entities, including companies and governments.

If the Trump campaign or a pro-Trump political group accepted funds from a Russian source, that would represent an obvious case of illegal “coordination,” the official term under Federal Election Commission law that most closely resembles collusion, according to Larry Noble, who served as the agency’s general counsel from 1987 to 2000.

But the guidelines against coordination cover a wide spectrum of activities that go well beyond a clear-cut transfer of money from a foreign bank account to a campaign’s coffers in the U.S.

Foreign entities are barred from providing a campaign with any “thing of value,” such as useful information on a political opponent. In cases that don’t involve a direct transfer of money, there must be proof that a campaign understood the information it exchanged with a foreign entity would be used for the illegal purpose of influencing an election, said Noble, one of the nation’s leading experts on campaign finance law.

“Let’s say you meet a Russian diplomat at a party and you say, ‘We have a great campaign and a shot of winning if we can win the Midwest,’” Noble said, describing in hypothetical terms the type of conversation that might have occurred during documented meetings that took place last year between Trump campaign associates and Russian officials.

That exchange would not violate FEC law if the Trump campaign was unaware that Russia was trying to meddle in the election. But if the campaign believed Russia was interfering in the race, and went one step further by sharing information with Russian officials that campaign advisers knew could be helpful for Trump, that would constitute illegal coordination.

It would not matter who initiated the dialogue, Noble said. The coordination standard would apply regardless of whether Trump campaign officials shared the information unprompted with Russia, or Russian officials reached out to the campaign to request information they could use to meddle in the election on Trump’s behalf. 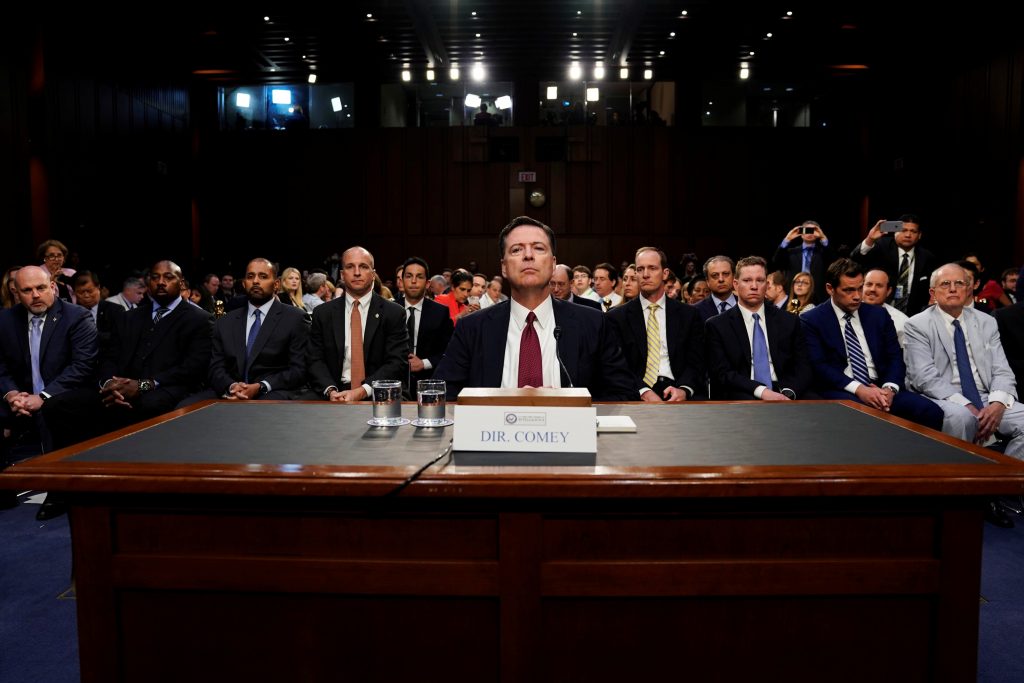 But even then, proving coordination, or collusion, under campaign finance law would hinge on the type of information that was potentially shared between Russia and Trump’s campaign.

The exchange of publicly available information before the Nov. 8 election would not violate FEC regulations. But an exchange of private or classified information, such as internal tracking polls or voter records, would be considered an illegal act of coordination.

Some legal experts believe the rules apply to the emails of Democratic National Committee and Clinton campaign officials that were stolen and given to Wikileaks, which released them publicly in several waves over the final months of the 2016 election. U.S. intelligence agencies believe Russian hackers backed by the Kremlin stole the emails as part of a broader effort to interfere in the race on Trump’s behalf.

The stolen emails qualify as collusion under campaign finance law, because they provided a valuable resource for Trump, who touted the Wikileaks documents numerous times throughout the election, Robert Bauer, a former White House counsel to President Barack Obama, wrote in a recent essay on collusion regulations.

Given candidate Trump’s praise of Wikileaks and his public call for Russia to find more Clinton emails, “the Russians could only have been strengthened in the conviction that their efforts were welcome and had value,” Bauer wrote.

Still, proving other aspects of potential collusion between Russia and Trump’s campaign might be more difficult to do under campaign finance law, Noble said.

The regulations include a media exemption that allows U.S. news organizations to express opinions of candidates, including ones that criticize or endorse an individual. It’s unclear if the exemption would extend to foreign media outlets, like the state-owned media organizations and twitter bots in Russia that are widely believed to have spread fake news online during the 2016 election in an attempt to undermine Clinton’s candidacy.

“When you start getting into the specifics of the law, there are some issues that are not necessarily resolved. And when you bring in foreign activity, you have to figure out how the law applies,” Noble said. 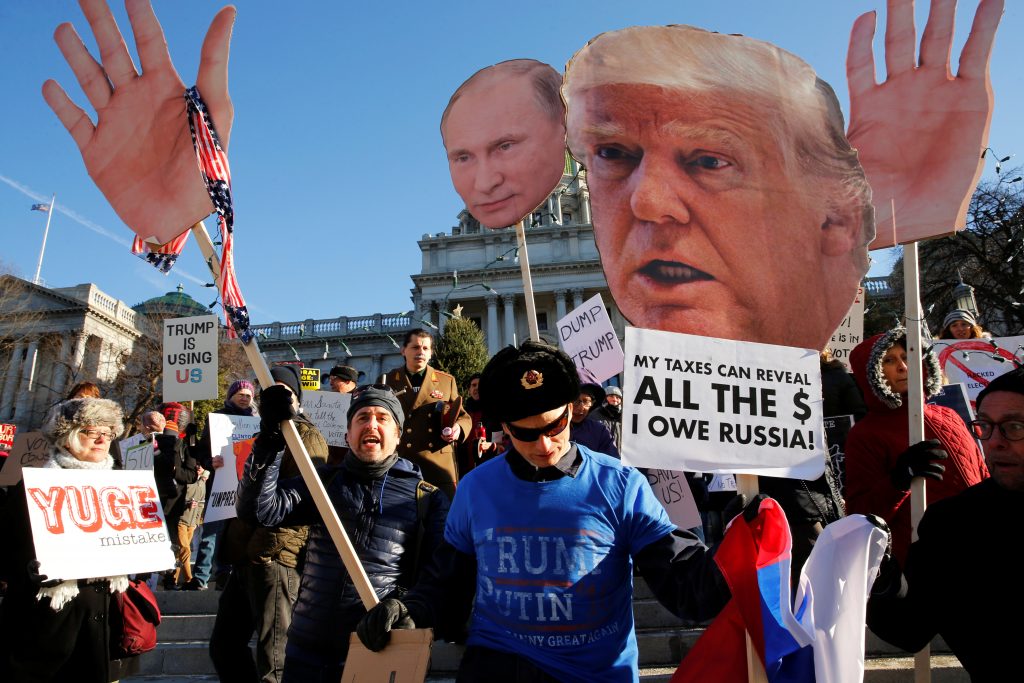 Protesters hold signs of Donald Trump and Russian President Vladimir-Putin at a rally in Harrisburg, Pennsylvania on December 19, 2016. Photo by REUTERS/Jonathan Ernst

In examining the Trump campaign’s ties to Russia, both during and after the election, the special counsel investigation will likely also focus on other areas of the law outside of campaign finance.

There are laws on the books against hacking, bribery and tampering with votes that could come into play in the Trump-Russia investigation. A failure to properly disclose financial transactions with a foreign entity — something Michael Flynn is reportedly under investigation for — could also fall under the broad umbrella of collusion.

Additionally, investigators could focus on bribery law if evidence turned up that individuals linked to Trump’s campaign were paid by Russia in exchange for promising future United States action on a specific policy, like lifting economic sanctions.

In this case, however, recent court decisions have narrowed the definition of bribery. It remains unclear if a promise made by a candidate or campaign official in exchange for payment from a foreign government would constitute a “quid pro quo” bribe under federal law. A similar deal by an administration official would be easier to prosecute, legal experts said.

Proving intent is often the biggest challenge for prosecutors in cases concerning collusion.

And while the U.S. intelligence community and lawmakers from both parties agree that Russia meddled in the election, proving that Moscow colluded with the Trump campaign would have to be accompanied by clear evidence of intent.

The Trump campaign could be investigated for conspiracy, if the probe turns up evidence that it devised a plan with Russia to change the outcome of the election and then took concrete steps to carry it out.

If Russia came up with a plan to influence the election independently of the Trump campaign, but the campaign found out about it and “knowingly took a step to assist [in the effort], that could fall under what is colloquially called collusion, but would technically be called by a prosecutor aiding and abetting,” said Hueston, the former assistant U.S. attorney.

Under the statutes for conspiracy and aiding and abetting, investigators would need to show that the Trump campaign acted intentionally in a manner that broke U.S. law. But proving intent is often the biggest challenge for prosecutors in cases concerning collusion, legal experts said. The same challenge exists in investigations into potential obstruction of justice.

When it comes to collusion, it’s too early to know where Mueller’s special counsel investigation will lead, because there appear to be so many different angles to pursue, said Noble, who has worked in campaign finance law for four decades.

“I’m not aware of another situation where we’ve seen allegations of a foreign country being this involved in our elections,” Noble said. “If there’s evidence of collusion under multiple different laws or agencies, Mueller will look at all of them.”

Left: A a store located opposite the U.S. embassy in Moscow, Russia advertised a discount on January 20, 2017 in honor of Donald Trump's inauguration. Photo by REUTERS/Sergei Karpukhin