In defending his health care plan this week, Sen. Lindsey Graham, R-S.C., called the measure “the only process left available to stop a march toward socialism.” The remark was a boiler-plate Republican critique of the Affordable Care Act. But it was also a nod to the massive political divide over health care policy on display in recent weeks.

While Republicans built support for Graham-Cassidy, which would gut the health care law and shift federal funding to the states, Sen. Bernie Sanders, I-Vt., introduced the “Medicare for All Act” earlier this month. A growing number of Democrats signed onto the bill, which would expand Medicare and create a universal health care system.

Obviously, Sanders’ plan stands no chance of passing right now. (It’s unclear if Republicans can pass Graham-Cassidy, especially after Sen. John McCain, R-Ariz, came out against the plan Friday). Still, it’s worth re-examining some of the fundamental flaws of United States’ current health care system — and why adopting a single-payer model makes the most sense.

To begin with, it’s worth pointing out that the single-payer system is hardly a step towards “socialism,” as Mr. Graham claims. The United Kingdom, Canada and Germany — all countries with different forms of universal health care — are safe bastions of capitalism.

Secondly, the U.S. has the most inefficient medical system in the world, based on health care spending and outcomes. America spends much more on health care per capita than any other nation in the world and gets less health for it. 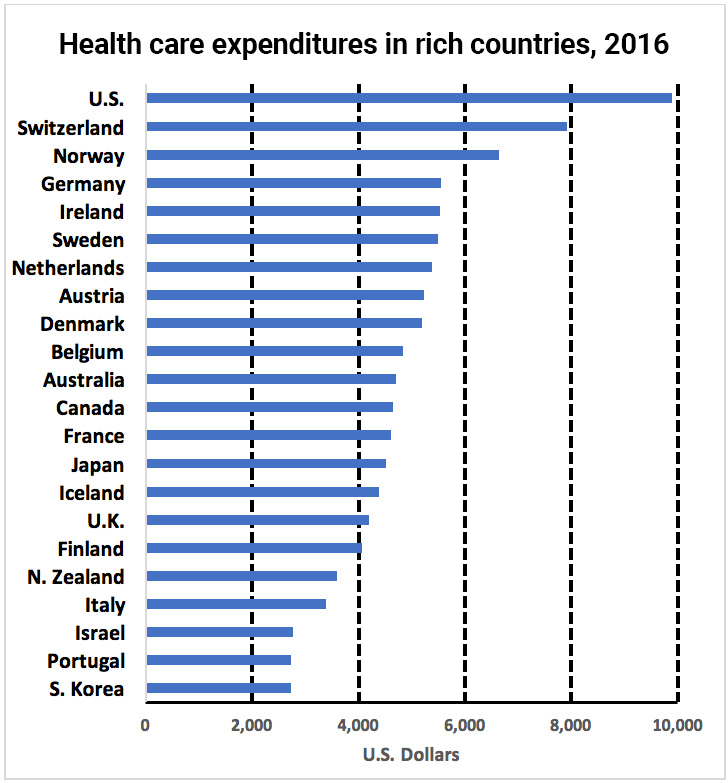 The differences are not trivial at all. The median per capita spending on health care in wealthy countries is $4,700 per year, according to research by the Organisation for Economic Co-operation and Development. (That means that half of the countries spent more than that and half spent less). For instance, Canada‘s spending was just at the level of the median. In contrast, the U.S. spent more than twice as much, at $9,900 for every man, woman and child.If we had Canada’s system we could save no less than $13,600 per average household. That adds up to a walloping $1.7 trillion dollars for the U.S., about as much as last year‘s after-tax profits of all U.S. corporations combined. That’s right: all the profits of J.P.Morgan Chase, Walmart, Apple, Exxon, Facebook and you name it put together. That’s tantamount to highway robbery.

And what do we get for it? More bureaucracy, more price gouging, more uncertainty, and, most importantly, shorter lives. In 2015, average life expectancy in the United States was 79.3 years, data from the World Health Organization shows. In Canada, it was 82.2 years. That means that Canadian babies can expect to live three years longer than their counterparts born south of the 49th parallel. How much would it be worth to you if you could live three years longer? Probably a large amount. Who cares about what you call the system if it delivers a better product?

These are not alternative facts. It’s hard evidence pointing to grave inefficiencies in the health care system. So, what causes all this?

As a country we tend to cling to the misguided belief that all markets are always and everywhere necessarily efficient. This is patently false, however, as the Nobel Prize-winning economist Joseph Stiglitz has pointed out. In the case of the medical system, clinging to an outdated ideology is nothing less than pernicious. Why? Because the medical industry is unique, and we’ve known this for a very long time. As the economist Kenneth Arrow, another Nobel Prize winner, argued as far back as 1963, free markets in health care are inefficient because of the “existence of uncertainty in the incidence of disease and in the efficacy of treatment.” 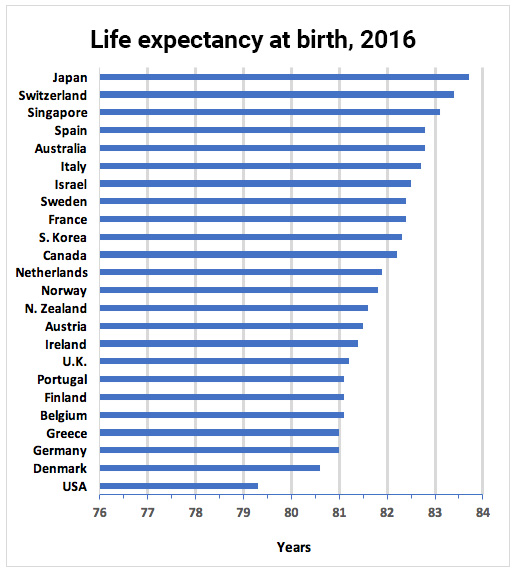 In addition, unlike in most other markets, health care lacks serious price competition (price competition being one of the ways in which markets reach efficiency). For example, hospitals do not list prices as we enter the door. When was the last time you shopped around for the lowest-priced x-ray? As a result, the current health care system runs on what’s called asymmetric information. And markets characterised by asymmetric information — where you get services first and find out the cost later — are generally inefficient.

What’s more, there are perverse incentives built into the current health care system for providers and insurers to increase their prices, and prescribe additional, costly services — like x-rays or MRIs — when they’re not really needed. I’ve experienced that myself.

The health insurance market has also been hampered by the problem of “adverse selection.” People with the most health care needs have a higher probability of insuring themselves than those who are healthy, which drives up the cost for everyone. (The Affordable Care Act tried to address this issue, with mixed results). For all these reasons and many more, it’s no wonder that the U.S. population has less confidence in its health-care system than people in other advanced industrialized countries.

Which brings us back to single-payer. I experienced the difference between a single-payer system and the U.S. system when I worked in Germany. And I can tell you that the German system was much simpler, cheaper, and better. The extra insurance I purchased beyond the one provided by the government cost $500 for my family of four. But it meant that we were covered 100 percent for everything, the coverage was worldwide, and it included doctor’s visits, dental work, and hospitalization. We had no copayments or deductibles, and prescriptions cost just $10 each. I did not experience any frustrating moments in the 18 years I worked there.

Here, in contrast, there is lot of confusion, mistakes, and I usually have to call for an invoice. So the future isn’t Trumpcare — whether it’s the current Graham-Cassidy bill or some future version of it. It’s a single-payer system. The Sanders wing of the Democratic Party is right: it’s time for Americans to repeal Obamacare and adopt a single-payer system like the ones in other developed, capitalist countries like Canada.

Left: Sen. Bernie Sanders, I.Vt., speaks during an event to introduce the "Medicare for All Act of 2017" on Capitol Hill on September 13, 2017. Photo by REUTERS/Yuri Gripas