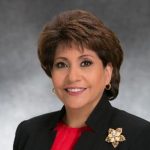 We can achieve greater economic prosperity, but we need to hear much more than we have so far from both candidates on specifics.

The appeal of restoring the prosperity America enjoyed after World War II to those Americans struggling today is not hard to see. The idea that the middle class was open to anyone willing to work for it, that you could have a good job that could support a family, even if you did not have an education and that it was a given that your children would do better financially than you did are all core tenets of the American Dream.

First, it is important to remember that the post-war economic boom did not come about by happenstance.

And while the notion that there was uninterrupted growth and prosperity during this time is mythical (the economy had its ups and downs through the period), it was not just a myth. I saw it in my own family. My father had an eighth grade education, my mother a fifth grade education, yet they were able to buy a home. And while not always easy, my father’s factory job and my mother’s child care job were able to support my six brothers and sisters and me. And thanks to financial aid grants and student loans, five of my siblings and I went to college and graduated, and we are all much better off than we were as children.

But the promises being made by both candidates and both parties to restore this kind of prosperity need to be backed up by an ambitious economic plan. First, it is important to remember that the post-war economic boom did not come about by happenstance. Congress and the Truman Administration enacted sweeping legislation that focused on creating jobs and consumer demand that would sustain the enormous growth of the U.S. economy during the second World War.

A great example is the justly revered “GI bill.” Most believe that the GI bill was just about education, but it was much more than that. The GI bill provided funding for job training and affordable mortgages along with funds to complete high school or go on to college. It was, in short, a law meant to transform the American workforce and economy. The federal government also invested in American infrastructure, most notably the epic federal highway system that truly connected all of America for the very first time.

While both parties have proposals to stimulate the economy — tax cuts for Republicans and raising the minimum wage for Democrats, for example — neither party is advocating for the kind of transformative initiatives that propelled the American economy in the 1940s and 1950s.

While both parties have proposals to stimulate the economy — tax cuts for Republicans and raising the minimum wage for Democrats, for example — neither party is advocating the kind of transformative initiatives that propelled the American economy in the 1940s and 1950s. Some would argue that this is just being realistic, but we would argue that this is the result of some of the choices our country has made in recent years.

For example, both parties have bought into a fiscal austerity agenda that prioritizes deficit reduction. While some believe this is a necessity, it has also had incredibly damaging consequences. Our austere budgets are starving efforts to provide much-needed repairs to our crumbling infrastructure, to making needed investments in health and education, and to make the kinds of investments in reducing poverty and helping the American working family that resulted in unprecedented post-World War II prosperity.

We believe that such investments would be a far better choice for our country’s future well-being than continued austerity. Even though traditional manufacturing is unlikely to ever make a comeback, there are 21st century areas that can potentially provide the kind of growth we need such as alternative energy development, dealing with climate change, comprehensive tax reform and comprehensive immigration reform.

Lastly, I would note one caution about the post-World War II prosperity theme. It needs to be noted that communities of color — especially African-Americans and Latinos — are not nearly as nostalgic for this period as perhaps other Americans. We cannot forget that segregation was the law of the land in the South for African-Americans and Mexican-Americans in the Southwest. And even in other parts of the country, informal racism was often as insidious. My own father and mother had to sit in a segregated section of the movie theater even though we lived in Kansas City, Kansas.

The changing demographics of this country and the exponential growth of workers of color in the next few decades compel us to address racial inequities that also serve as a hindrance to financial gains.

African-Americans were the targets of much violence, including from law enforcement. And Mexican-Americans were caught up in the abusive practices of “Operation Wetback”, which was a much reviled mass deportation program in the 1950s. Even though the GI bill provided considerable educational benefits, its impact was limited in our communities since banks all too often refused to make loans to veterans in African-American and Hispanic neighborhoods. This barrier to home ownership is one of the main causes of the enormous wealth gap that still exists between White-Americans and communities of color.

The changing demographics of this country and the exponential growth of workers of color in the next few decades compel us to address racial inequities that also serve as a hindrance to financial gains. That means making sure that reducing discrimination and achieving equality are also essential components of fostering American prosperity going forward.

Left: The changing demographics of this country and the exponential growth of workers of color in the next few decades compel us to address racial inequities that also serve as a hindrance to financial gains, writes columnist Janet Murguia. Photo by Jessica Rinaldi/The Boston Globe via Getty Images

As someone who has experienced the promise of the American Dream firsthand, Janet Murguía has devoted her career in public service to opening the door to that dream to millions of American families. Now, as a key figure among this generation of leaders in the Latino community, she continues this mission as President and CEO of the National Council of La Raza (NCLR), the largest national Hispanic civil rights and advocacy organization in the United States. Since 2005, Murguía has sought to strengthen NCLR’s work and enhance its record of impact as a vital American institution. Murguía has also work to amplify the Latino voice on issues affecting the Hispanic community such as education, health care, immigration, civil rights, and the economy. Murguía has been recognized on numerous occasions for her work. She has been selected twice as one of Washingtonian magazine’s “100 Most Powerful Women in Washington” and as one of the NonProfit Times’ “Power and Influence Top 50” leaders. Prior to NCLR, she worked at the White House, ultimately serving as deputy assistant to President Clinton, and as executive vice chancellor for university relations at the University of Kansas. Janet Murguía grew up in Kansas City, Kansas. She received three degrees from University of Kansas: a B.S. degree in journalism, a B.A. degree in Spanish and a J.D. degree from the School of Law. She also received an honorary degree — Doctor of Humane Letters — from California State University, Dominguez Hills.