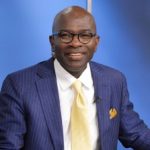 Column: Is Donald Trump losing his party with his rhetoric and leadership style?

Editor’s Note: On Thursday, Aug. 18, at 5 p.m. EDT, the PBS NewsHour along with the Hutchins Center for African and African-American Research will present a special forum on “Race & the Race to the White House.” Armstrong Williams, conservative TV and radio host as well as business manager for Ben Carson, will join as a panelist. You can watch live and join in the discussion here.

Dog-whistle politics are not unfamiliar in America. Democrats are certainly known to use the specter of civil rights abuses to drum up black votes. Republicans have consistently campaigned on the platform of law and order, using images of black criminals to scare voters into supporting more conservative policies. Republican operative Lee Atwater described what he called the “Southern Strategy”: a means of appealing to racial divisions without explicitly mentioning race.

But Donald Trump has gone well beyond innuendo to specifically name the culprits.  He uses none of the qualifiers that usually accompany such attempts at coded communication. For example, he openly called for a blanket, albeit temporary, ban on Muslim immigration to the United States. This is clearly seen by many Muslims as a direct attack on their religion. Trump’s surrogates have suggested that Muslim beliefs are inherently incompatible with the American way of life.

And in his opening salvo as a candidate for the office of president last June, Donald Trump issued the following statement: “When Mexico sends its people, they’re not sending their best. They’re sending people that have lots of problems, and they’re bringing those problems with us. They’re bringing drugs. They’re bringing crime. They’re rapists. And some, I assume, are good people.”

Needless to say, Donald Trump’s poll numbers among prospective Latino voters have literally cratered.  Record numbers of Latinos are registering to vote specifically in order to defeat Donald Trump at the polls. To put it another way, Donald Trump has not only lost friends, but created net enemies among the Latino voting bloc.

“Donald Trump has not only lost friends, but created net enemies among the Latino voting bloc.”

Trump would of course remind us that we do in fact have an immigration problem. There are more than 11 million undocumented immigrants living and working in America, and a large number hail from Mexico. While there have been several high-profile crimes involving undocumented migrants, the evidence suggests that they have a far lower propensity to commit crimes than average American citizens. The reasons for this are obvious: they want to stay under the radar.  And many of them are fleeing crime, poverty, and political oppression in their own countries. They want peace too.

Perhaps Trump’s language might be construed as impolitic, by some, but by no means all, members of the voting public. In fact, his words resonate among a segment of the public who view illegal immigration as a drain on working-class Americans. Many of them feel that undocumented immigrants harm Americans by undercutting wages and burdening public services for which they do not contribute their share of taxes. Again, the evidence is somewhat mixed on this account – wages paid to undocumented immigrants by small businesses tend to make them more competitive, and it is estimated that they are net contributors to social security, since their wages are often taxed, but they cannot claim the benefit by reason of their immigration status.

Trump revisited the issue in part of his controversial denouncement of U.S. District Judge Gonzalo Curiel.  Judge Curiel is overseeing a civil lawsuit involving Trump University, and Trump believes that the case should have been dismissed on its merits. However, in complaining about the case, Trump assailed the judge, saying that his “Mexican heritage” posed an “absolute conflict” of interest because Trump has promised to build a border wall. Curiel is neither undocumented nor an immigrant. He is a U.S. citizen. Given that he is a U.S. citizen, why would he have an “inherent conflict of interest” over Trump’s proposal to build a wall?

That “inherent conflict” would only arise if one were to assume (without evidence) that an American judge of Mexican descent must be opposed to Trump’s plan because of his heritage. That further begs the question of whether Trump himself construed his opening salvo as a protest against the problems of illegal immigration, or in fact, a coded racial attack against all people of Mexican descent in America.

Though Trump has not targeted blacks specifically, his polling numbers among blacks rank among the lowest of any Republican presidential candidate in recent memory. The reasons for this are simple. Not only is Hillary Clinton extremely popular among blacks, she is seen as inheriting the mantle of America’s first black president, Barack Obama. The more Trump attacks President Obama and Clinton, the worse he fares among black voters.

But there is another subtext. Blacks are not merely concerned with their own fate as African-Americans. They view the broader fight for civil rights and non-discrimination as a moral obligation that they inherited from years of struggle against slavery and de jure segregation in this country.

In some ways, blacks see equal rights as their major contribution to the American social fabric, and they are not going to give it up easily just because they are not the population being singled out for oppression — this time around. “There but for the grace of God go I,” seems to be the governing sentiment.

We are all familiar with dog-whistle politics and identity politics in this country. But is Trump’s appeal really any different? In one sense, yes it is. Trump is more explicit about issuing blanket condemnations of races (Mexicans) and religions (Muslims) without the usual qualifiers that accompany such condemnations in polite speech. Many who support Trump’s message say he’s merely “telling it like it is.” That is, being blunt and forthright about matters that everyone is talking about in private, but no one wants to express openly.

But the other question we must ask is, even if Trump is merely giving public voice to private sentiments, should he do so? As a leader, is his job merely to voice some of the sentiments expressed to him in private by his supporters, or is it to shape and mold their views in ways that are constructive and engage the better animals of our spirits?

One has to believe that leadership requires refinement of character. The leader must understand the plight of the common man and woman, but strive to elevate the discourse. Leaders must be deeply connected with the aspirations of those they seek to lead. But they must also voice such concerns with clarity about justice and civil discourse. In other words, leadership demands more of leaders than it does of followers. In the final calculation, good leaders must seek to advance not just one race at the expense another, but the human race as a whole.