Column: When will the candidates pay attention to the biggest environmental issue facing America?

“This election is about climate change,” said Vermont senator Bernie Sanders while endorsing the Democratic nominee for president Hillary Clinton. He’s with her because she’s the one following the scientists on global warming and pledging to accelerate the development of clean, renewable energy sources, such as sunshine and wind, while also pledging federal aid to states and cities attempting to restrain carbon dioxide and other greenhouse gases through energy efficiency and public transportation, among other efforts.

Meanwhile, on the Republican side, the Grand Old Party’s 2016 platform spends four pages pledging to roll back the Obama administration’s Clean Power Plan, rejecting the Paris Agreement to combat climate change globally and even attempting to overturn a Supreme Court decision that allows the U.S. Environmental Protection Agency to regulate CO2. All this in service of expanding efforts to get at natural gas, oil and coal, which the platform also officially declares “clean.”

The contrast is stark, the positions are clear, and the candidates are raring to fight it out. Yet, climate change remains the most important issue not truly being discussed in the 2016 campaign, as it was in the 2012 campaign, 2008, 2004 and so on back into the dim mists of the previous century.

Simply put, climate change is the biggest environmental problem the U.S. has ever faced. The nation’s existing fleet of power plants that burn fossil fuels will need to be replaced by nuclear reactors, photovoltaics or power plants that employ the sun’s heat, massive wind farms or tapping into the energy from hot rocks deep beneath our feet. As electricity is cleaned up, hybrids, electric cars or other cleaner vehicles will be needed to eliminate the globe-warming pollution emanating from the more than 100 million tailpipes in the U.S.

All of this needs to be done in just a few decades, or enough CO2 will have entered the atmosphere to lock in damaging climate change, absent some magic technology to suck greenhouse gases back out of the air.

This is not just a U.S. problem. China still gets nearly 80 percent of its electricity from burning coal, despite the attendant air pollution and public health impacts. India is racing to catch up or even surpass China for having the dirtiest air, thanks to a penchant for burning ever more coal. Even supposedly clean, green Europe has struggled: for example, pushing diesel technology in deference to European carmakers but at the cost of extra lung-choking smog in Paris and Berlin, as well as the ever more rapid loss of forests in Indonesia and elsewhere for palm oil plantations to make biodiesel. The candidates need to speak realistically about how the U.S. can work internationally to solve this global problem, perhaps accelerating and strengthening the Paris Agreement. 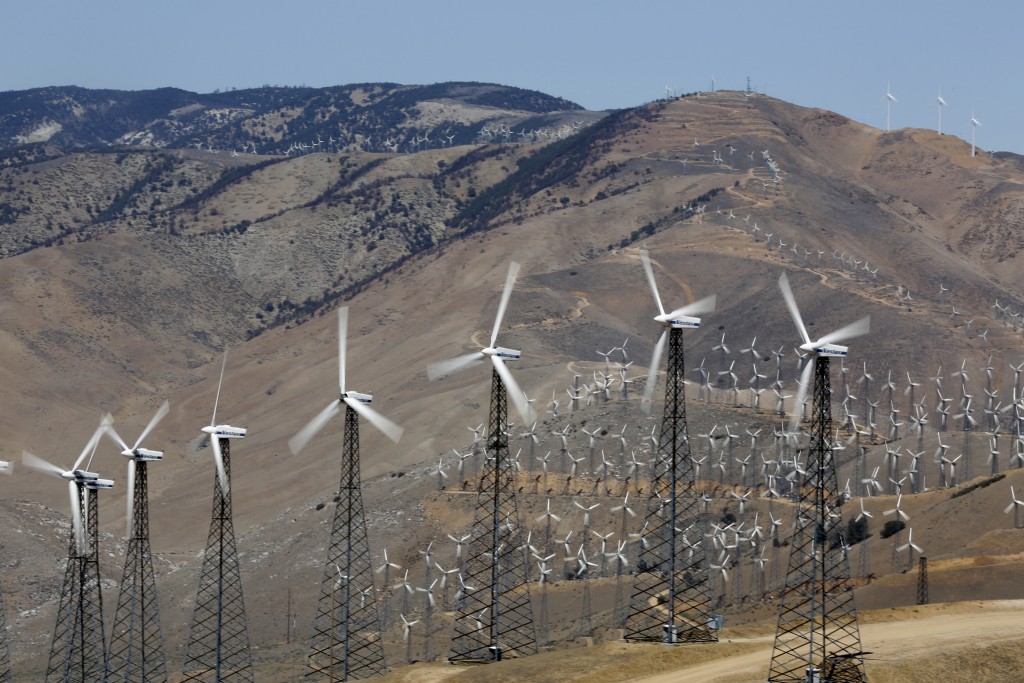 A section of the Tehachapi Pass Wind Farm is pictured in Tehachapi, California June 19, 2013. Photo by Mario Anzuoni/REUTERS

In order to cut CO2 by two-thirds by 2050, the International Energy Agency estimates that the world will have to build 30 nuclear power plants each year; nearly 16,000 wind turbines on land and at sea each year; 45 geothermal power plants and 55 solar thermal power plants each year. Some 3.5 billion square feet of solar panels would need to be installed each year. And to top it off, 55 new fossil fuel-fired power plants would still need to be added each year, only outfitted with technology to capture and store the CO2 that would otherwise invisibly billow out the smokestack to add to the ever thickening blanket in our shared sky.

Don’t like nuclear or wind farms? Then build more of some other option. Oh, and we’ll need to spruce up and expand the electric grid. All of this is a huge environmental challenge and perhaps the biggest economic opportunity of the 21st century.

All of this is a huge environmental challenge and perhaps the biggest economic opportunity of the 21st century.

Climate change is just the tip of the proverbial iceberg. Americans are conspiring with the rest of humanity to change the chemistry of the oceans that cover 70 percent of the planet via the same CO2 piling up in the sky. Farming has consumed more of Earth’s limited land, and trawling fleets pull everything out of the sea, helping drive a gathering mass extinction, perhaps the sixth in all of geologic time. Humanity has wrested fertilizer out of the air to feed crops, which is also feeding toxic algal blooms and dead zones. This new human time has a provisional name—the Anthropocene—and it is up to us whether we want it to get better or worse, whether we want to hit the planet and all its exuberant profusion of life like an asteroid, or not.

Climate change exacerbates all these problems, but the biggest challenge is human nature. While negotiating the first global agreement to recognize and begin to address global warming back in 1992, the first President George Bush famously warned: “The American way of life is not up for negotiation.” With gas prices low, sport-utility vehicles and other gas guzzlers are helping drive record vehicle sales for automakers while hybrids, electric cars and other alternatives remain just under 3 percent of all the cars on the road in the U.S. The federal government is still leasing public lands in the west for gas and oil drilling as well as, yes, coal mining. And coal and natural gas remain the predominant fuels for generating electricity, emitting more molecules of CO2 with every ton or cubic foot burned because almost none of it is captured and dumped somewhere besides the atmosphere.

Until presidential candidates are consistently talking about a fast and deep transformation of the American economy and energy supply, we’re not really talking about the critical issue of climate change.

Left: "Climate change remains the most important issue not truly being discussed in the 2016 campaign, as it was in the 2012 campaign, 2008, and 2004," David Biello writes. Photo by Thomas Vogel/via Getty Images