Congress has tried to protect ‘dreamers’ before. Will this time be different?

President Donald Trump this week gave Congress a narrow, six-month window to act to protect young undocumented immigrants from deportation, an issue that has bedeviled lawmakers from both parties for more than a decade.

But after recovering from their initial anger over Mr. Trump’s decision to end the Deferred Action for Childhood Arrivals program, Democrats and immigration reform advocates — and even some Republicans — now see an opening to achieve a goal that has eluded Congress repeatedly in the past.

This time could be different, they believe, for a number of reasons.

After weeks of speculation about how he would handle the issue, Trump ultimately decided to phase out the Obama-era DACA program. But he has broken from the hardline, anti-immigration wing of the Republican Party by expressing support for protecting so-called “dreamers,” young people living in the United States who were brought to the country illegally as children.

Under Trump’s plan, the program will expire on March 5, 2018. The administration stopped accepting new applicants this week; if Congress doesn’t pass a law to replace it, young undocumented immigrants who are not currently protected by the program would become eligible for deportation in early March.

Polls shows that a majority of Americans support the program, which was established by former President Barack Obama through an executive order in 2012. The program grants two-year, renewable deferrals from deportation and offers work permits so long as applicants meet certain conditions. Roughly 800,000 people have received protection under DACA since the program started five years ago.

Today, 58 percent of Americans, including a large portion of Republicans, believe “dreamers” should be allowed to remain in the U.S., according to a Morning Consult/Politico poll taken one week before Trump’s decision.

“We want to do it as soon as possible and strike while the iron is hot, because public opinion is so in favor” of the program, House Minority Leader Nancy Pelosi told reporters on Thursday.

The strong public support for DACA, along with Trump’s short deadline, could also push Congress to act fast, said Clarissa Martinez de Castro, a deputy vice president at UnidosUS, formerly known as the National Council of La Raza, one of the nation’s most powerful Latino advocacy groups. 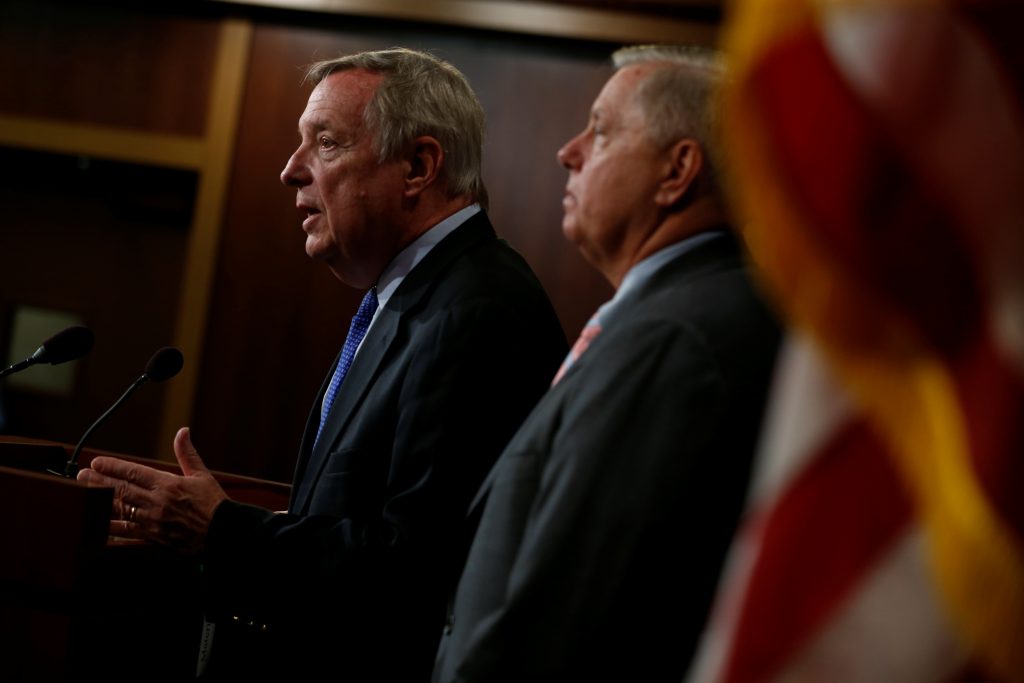 Senator Richard Durbin, D-Ill., left, and Senator Lindsey Graham, R-S.C., speak about proposed legislation to deal with so-called “Dreamers” during a news conference at the U.S. Capitol on September 5, 2017. Photo by REUTERS/Jonathan Ernst

Some Republican lawmakers, including House Speaker Paul Ryan, have signaled support for legislation that would offer some form of protection to young undocumented immigrants, so long as it includes tougher immigration enforcement measures.

“We need to respond to this immediately,” Martinez de Castro said. “I think there’s incredible pressure to act, and that presents an opportunity.”

The biggest question now is whether or not lawmakers will try to attach immigration reform to another piece of major legislation this fall, or try to pass a bill on its own. Ryan and Sen. John Cornyn, R-Texas, the Senate majority whip, have said Republicans will not agree to a standalone bill.

But the packed legislative calendar this fall could work in the Democrats’ favor. If there isn’t enough support among Republicans in Congress for a DACA replacement bill, Democrats will have several chances to attach the measure to legislation that must be approved in the coming months.

The option that has received the most attention so far is the spending package needed to keep the government funded past the first week of December.

Democrats will have several chances to attach a DACA measure to legislation that must be approved in the coming months.

After Trump dealt a blow to Republican leaders by striking a surprise deal with Democrats this week, Congress quickly approved a three-month spending package that included disaster relief and a provision raising the nation’s debt ceiling until Dec. 8. Democrats could hold out for an immigration measure when the spending and debt ceiling debate returns later this year.

At the same time, Democrats are also eyeing a number of other “must-pass” bills as possible vehicles for a DACA replacement measure. They include the annual defense reauthorization bill, and bills to renew funding for the Federal Aviation Administration and the federal-state children’s health insurance program, to name a few.

But it’s still too early to tell how the political horse trading would play out. Serious negotiations over a possible compromise haven’t begun yet on either side of the Capitol.

First, Democrats are planning to test the waters to see if there is enough support to pass a “clean” version of the Dream Act, a bill protecting young undocumented immigrants that was first introduced in 2001. Unlike the DACA program, which offers temporary relief from deportation, the original Dream Act would have granted eligible applicants permanent resident status if they met a complex set of qualifications. 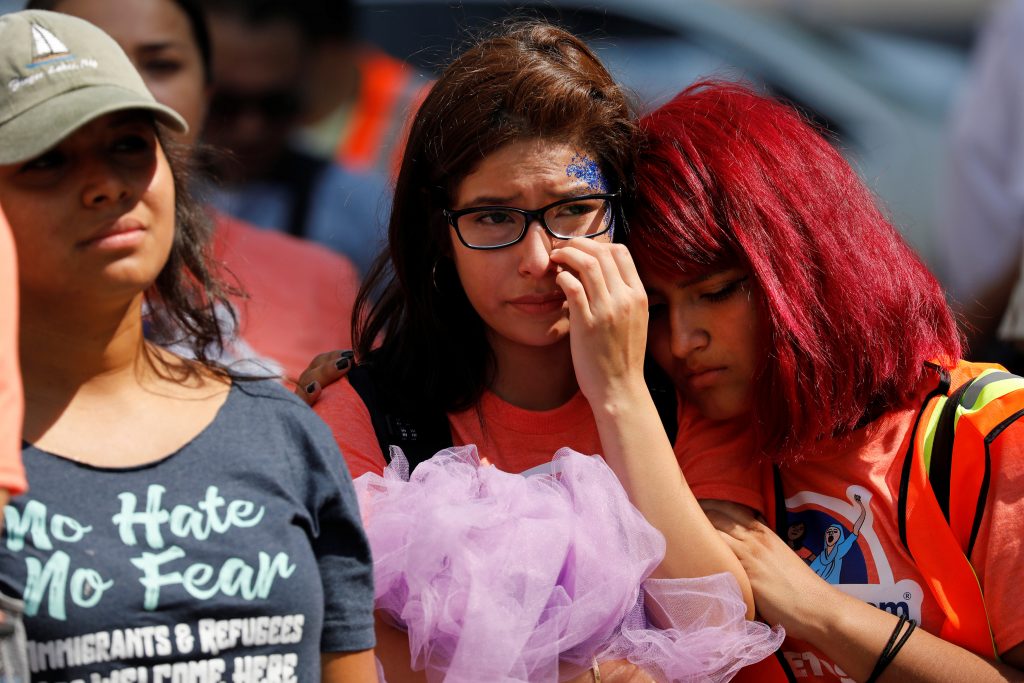 Immigration reform advocates said they would pressure Democrats to fight for a standalone bill, in the hopes that the issue is dealt with on its own merits instead of becoming a bargaining chip in a broader policy debate over other immigration issues, such as border security or funding for a wall along the U.S.-Mexico border.

“We’re pushing for a clean vote on the bill,” Martinez de Castro said.

The original Dream Act was bipartisan, proposed in the years before the Tea Party movement, when mainstream Republicans could support immigration reform without facing a backlash from the far right.

But the bill has failed to pass on multiple occasions since it was introduced in 2001. In recent years, the proposal has been blocked by an increasingly vocal anti-immigration wing of the Republican Party, as well as some conservative Democrats.

The closest it came to passage was in 2010, when the Democratic-controlled House approved the measure by a 216-198 vote, with support from eight Republicans. The bill died in the Senate after it failed to overcome a filibuster.

In 2013, the Senate voted 68-32 in favor of a bipartisan, comprehensive immigration reform bill that included parts of the Dream Act. Fourteen Republicans — among them 11 who are still in the Senate — voted for the measure, but House Republican leaders did not bring it up for a vote, allowing the bill to expire.

This week, some Democrats on Capitol Hill said they believed there was a chance Congress would be able to approve the Dream Act or a similar piece of legislation in the next six months.

“There’s clearly some way to come together on this, and signs that a number of Republicans want to do something,” Drew Hammill, Pelosi’s deputy chief of staff, said in an interview.

In July, Sen. Lindsey Graham, R-S.C., introduced a version of the Dream Act with Sen. Dick Durbin, D-Ill., a member of the Democratic leadership and one of the co-sponsors of the original legislation 16 years ago.

In March, Rep. Carlos Curbelo, R-Fla., proposed a bill that would allow young undocumented immigrants who were brought to the country illegally as children to stay in the U.S. The proposal would also allow “dreamers” to obtain citizenship eventually, after meeting certain requirements such as earning a higher-education degree, remaining employed or serving in the military over a five-year period.

So far, 29 House Republicans have co-sponsored the legislation — including 11 who signed on to the bill starting on Sept. 5, the day after Attorney General Jeff Sessions formally announced the administration’s decision to end the DACA program. 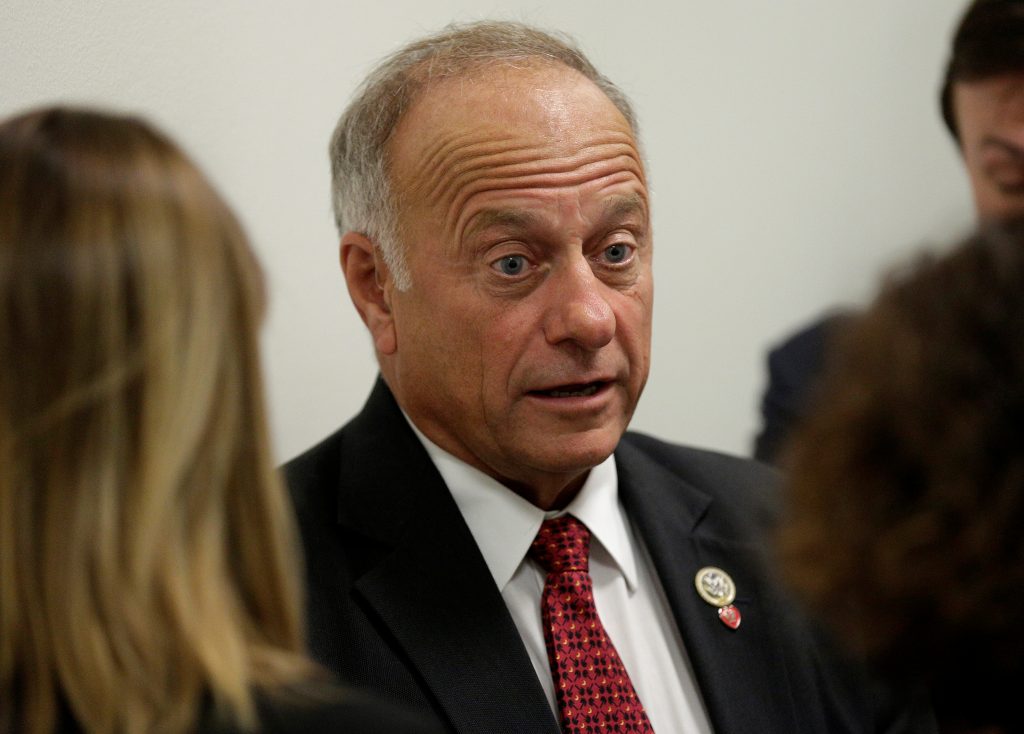 Rep. Steve King, R-Iowa, speaks to reporters about DACA and immigration legislation on Capitol Hill in Washington on September 6, 2017. Photo by REUTERS/Joshua Roberts

But several conservative Republicans in both chambers came out this week against a “dreamer” program, signaling that a standalone measure could face significant opposition in Congress.

After the decision came down, Sen. Tom Cotton, R-Ark, said in a statement that a proposal shielding undocumented immigrants would have to include other reforms aimed at protecting American workers.

“For 30 years, Americans have rejected repeated attempts to grant amnesty to illegal immigrants because they know what will follow: pressure on working-class wages, pressure on public schools, and pressure on welfare dollars,” Cotton said. “A standalone DACA amnesty will also be rejected if it is not combined with legislative reforms that lessen those consequences and produce lasting gains for all Americans.”

The final votes will likely be impacted by cold political calculations on the part of lawmakers who don’t represent large numbers of young undocumented workers.

The view reflected the right’s fierce opposition to plans that grant protection to undocumented immigrants — opposition that Democrats and moderate Republicans must overcome in order to act in the next six months.

Whether Congress takes up a “dreamer” bill alone or in tandem with other legislation, many of the final votes will likely be impacted by cold political calculations on the part of lawmakers who don’t represent large numbers of young undocumented workers.

Approximately 85 to 90 percent of the people who have been approved under DACA immigrated from Mexico, according to Mark Hugo Lopez, the director of Hispanic research at the Pew Research Center.

Many of them now live in left-leaning states that are dominated by Democrats. A majority of DACA recipients — 424,995 people — applied from the state of California alone, according to the most recent government statistics on the program, which include data through March 31 of this year.

“California dwarfs everything here,” Lopez said, making it unclear how much Republicans from other parts of the country would gain politically from supporting the Dream Act, or something like it. “The unauthorized immigrant map is largely a blue-state map, and a blue-state metropolitan map,” Lopez added.