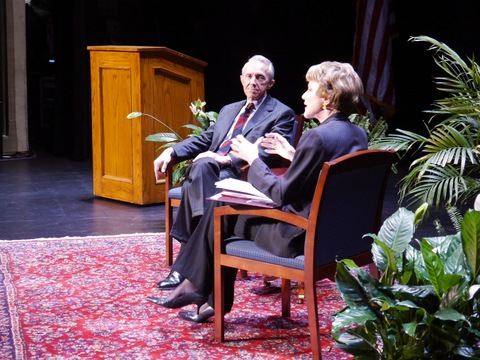 Not since comedian Bill Cosby visited Concord, N.H.’s Capitol Center for the Arts, has a celebrity been welcomed there with same the thunderous and sustained applause that greeted former Supreme Court Justice David Souter last Friday. Even after he and I had taken our seats on stage, ready to begin our extended conversation, the hearty clapping continued for another full minute and more. The intensely private Souter, who hasn’t made any extended public remarks in his state since retiring three years ago, looked abashed at first — then beamed. “Thank you, thank you,” he said.

More than 1,300 people had come to hear Souter’s thoughts on how the Constitution –celebrating the 225th anniversary of its adoption, September 17, 1787 — has managed to “keep up with the times.” Not exactly the sort of Friday night fare that usually attracts a sold-out crowd to any city’s largest public space. But this is New Hampshire after all, and civic-minded folks here are immensely proud of the distinguished jurist who’s called New Hampshire home since he was a boy.

Souter wasted no time taking on the theory of Constitutional interpretation advanced by his former colleague Justice Antonin Scalia that judges must adhere to a “fair reading” of the meaning the words in the Constitution had at the time they were adopted. That argument works just fine, Souter said, when it comes to what he called the “structural constitution” — which lays out the three branches of government and their powers, and mandates clear-cut rules like the requirement that a president be at least 35 years old.

You can watch excerpts of our conversation after the jump.

But this country also has “call it the ‘Liberty Constitution,'” he said, composed of the Bill of Rights and other provisions guaranteeing certain freedoms. “You get into terms like ‘unreasonable searches and seizures,’ which are prohibited,” he said. “References to the freedom of speech, without any further definition. Security in people’s houses. These general terms are best understood as a listing or menu of approved values, the application of which has to be worked out over time…. The problem of trying to make them work in practice, was an assignment that was left to the future,” he added, to the Congress and the ultimate arbiter, the Supreme Court.

The thrust of our more than hour-long conversation was his earnest effort to explain how the meaning of the Constitution must be constantly refined and reapplied by the Court to new fact situations. It was also a rejoinder to critics who decry “activist judges.” Take the Court’s expansion of the First Amendment’s guarantee of freedom of speech to include freedom of association, the right to join political parties or advocacy organizations like the NAACP. “Nobody in his right mind in 1791 when the Bill of Rights was adopted ever thought freedom of speech” would include the right to join organizations. But “without the power to come together and have someone speak for them, their right to speak really isn’t worth much,” he said. The Court recognized freedom of association, he said, “to give practical value to the general right of speech.” That’s the job of the Supreme Court, “to figure out how these things work, and the Constitution does not tell you that.”

But what about a more controversial set of cases, in their times and even today, concerning racial segregation? I asked. Plessy v Ferguson in 1896 held that despite the Equal Protection Clause of the 14th Amendment, a state law requiring separate railroad cars for blacks and whites was constitutional as long as the cars were physically the same. Sixty years later, the Court’s unanimous 1956 Brown v Board of Education decision held that separate schools for white and black children were unconstitutional because they were “inherently unequal.” “What is the public to make of that?” I asked.

“It’s natural, I’ve done it myself. I’ve gone around saying Plessy was wrong the day it was decided,” he said. “But in fact that’s unrealistic and I think it’s unfair.” The ruling has to be understood in the context of those justices’ life experiences, he said. “The court that decided Plessy v Ferguson consisted of judges that remembered slavery,” he said. To them, the idea that “a formerly enslaved population and their children…were entitled to exactly equal facilities on a railroad with the formerly dominant white population, that looked like real progress.” So in assessing equality, they focused only on the physical facilities. Was the upholstery of the same quality in the cars? Was the service?

But 60 years later, he said, the justices had vastly different life experiences. In assessing equality, they saw that “the facts were not simply things like nice buildings and clean textbooks. They looked beyond the measurable facts to what the facts meant.” And it was clear to them that the states requiring separate schools “were enforcing separation because they believed that the black group was not as good as the white group.”

It’s an argument that Souter returned to time and again, that the meaning of the Constitution is found not only in its literal words or concepts, but in how they apply to Americans of the current era. “What we learned from Brown is that the facts can include the meaning of facts as people experience them, as long as we have the eyes to see that,” he said. “And our capacity to see that changes over time.”

This argument wasn’t entirely new. Souter laid it out in a commencement speech at Harvard in 2010. In that same speech two years ago, he argued — as he did again Friday — that the Court often has to decide between two “legally Constitutionally recognized values that can be in conflict with each other. They both can’t win all the time. The paradigm examples are the guarantees of liberty and equality.”

But Souter, who still sits as a part-time federal appellate judge, broke new ground Friday night in venturing comment on a couple of controversial Supreme Court rulings issued after he left that bench. On the 2010 Citizens United decision, which struck down restrictions on independent campaign expenditures by corporations on First Amendment grounds, he noted that anyone who reads his former opinions in campaign finance cases “will know perfectly well that I would have gone the other way.” The majority was too purist, too single-minded in upholding the free speech guarantee to the exclusion of others, he said.

“There was a play of Constitutional values going on there,” he said, between the “liberty model of free expression” and the “equality model,” which would recognize “the possibility of a limitation on corporations so they do not drown out other speech.” No constitutional guarantees can be seen as absolute when they conflict with other guarantees. “If speech always wins, even if it’s an atomic secret that’s going to be broadcast to our enemies, it’s easy to make a decision. Speech always wins. But it doesn’t….Liberty doesn’t always trump equality or quality always trump liberty. ” A principled decision is not merely one that rests on a principle, but one in which “the court candidly and convincingly explains why this principle prevailed over that principle. It is the choice of principles that is the tough part.”

The Souter Seminar on Constitutional law had been underway 45 minutes when audience questions began. He carefully opined on one aspect of the recent decision on the Obama health care law; on prospects for a same-sex marriage if it reaches the Court (he took a pass); and on gun control under the Second Amendment.

But he grew most passionate when asked about the schools’ responsibility to teach young people the basics about their government and its founding principles. It’s a subject close to his heart. Since retiring, he’s joined a national commission to bolster teaching in the humanities and social sciences, as well as a new N.H. Institute for Civic Education. The greatest threat to America’s republican form of government won’t come from foreign invasion, or military coup, he said, but from what he described as “the pervasive civic ignorance” of Americans today.

Because of cutbacks in civic education from the 1970s onward, and exacerbated by the No Child Left Behind law, two-thirds of Americans today don’t even know that their country has three branches of government, he said. So they don’t know whom to hold accountable for the country’s festering problems. “What I worry about is that when problems are not addressed, people will not know who is responsible,” he said. “And when the problems get bad enough – another serious terrorist attack, another financial meltdown – some one person will come forward and say, ‘Give me total power, and I will solve this problem.’ That is how the Roman republic fell….That is how democracy dies. And if something is not done to improve the level of civic knowledge, that is what you should worry about at night.”

Hoping against hope to end on an upbeat note, I asked: “Do you think we’re losing our ability — which has always animated our belief in the Constitution and our country — that we are always perfecting our democracy?”

His reply was anything but hopeful. “I don’t think we have lost it. I think it is in jeopardy. I am not a pessimist, but I am not an optimist about the future of American democracy,” he said. “We’re still in the game, but we have serious work to do, and serious work is being neglected right now.”

Former Justice Souter on whether our democracy can endure:

Does he think we still have the capacity to do what the Framers did over the hot Constitutional Convention summer 225 years ago, which was compromise to overcome our differences? Souter paused. “I would like to think that enough examples of non-compromise are going to start people thinking that there must be a better way to try to govern the country,” he replied.

Another round of thunderous applause swelled the room. But they were sobering words from a sober and deeply worried man.

The Souter conversation was part of a year-long project, Constitutionally Speaking, designed to spur dialogue about the nation’s founding document, and provide materials for New Hampshire schools and teachers on the study of civics. The project is jointly sponsored by the N.H. Supreme Court Society, the University of New Hampshire School of Law, the N.H. Humanities Council and the NH Institute for Civic Education.